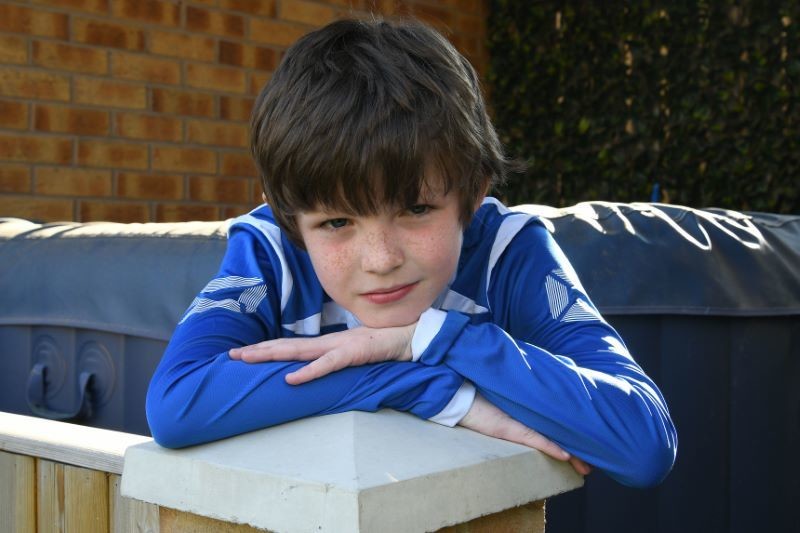 A YOUNG boy who suffered a stroke at six-years-old has defied the odds to play football again.

Riley Jack Hall, now eight, suffered a stroke in March 2017 and one of the things which upset him most was the news he might not be able to play football again.

The devastated youngster, who plays for Redfearns at Monk Bretton, still isn’t allowed to head the ball, but has been able to begin playing again nonetheless.

His grit and determination have earned him a nomination for a Barnsley Chronicle Young Champions award.

“It was only when he was told there are certain things he will not be able to do that he began to get upset.

“One of the activities he was told he may not be able to play again was football.

“When he was told this, he was inconsolable, truly heartbroken.”

Ordinarily, it occurs following a major trauma such as a car accident and if it is spontaneous, occurs in older people.

“It is almost unheard of that a child would suffer from vertebral artery dissection,” said Rebecca.

“After the stroke, Riley spent weeks at the Sheffield Children’s Hospital and specialists from Great Ormond Street were called in for support due to the rarity of his situation.

“Riley had inflamed arteries compromising the blood supply to his brain.”

Throughout his time in hospital, Riley, who had just been scouted by Barnsley Football Club, was allowed home at weekends and made sure that he went to support his team.

After months on the sideline and countless hospital visits, Riley was told by the doctors he could take part in playing football again, much to the delight of his parents.

Rebecca said: “Over the last couple years Riley has come such a long way.

“He has had to make several sacrifices in terms of activities he can and can’t join in with because his dissection hasn’t healed.

“This means that there is every chance he could suffer a stroke again so he has to be incredibly careful to ensure this does not happen.

“He can’t dive in a swimming pool, play on a trampoline or go on a roller coaster because any slight trauma to his head can trigger a stroke.

“Watching him put his boots back on and play football again was amazing but he had to start from the beginning, relearning everything and retraining his body into knowing how to do things that had once been like reflexes.

“This was also evident in his swimming, after jumping in for the first time after his stroke Riley sank and had to be pulled up by his instructor. He now has his 50 metre badge.

“While making sure he followed and respected what the doctors have said, he continues to push himself to the limits.

“He’s no longer allowed to do headers when he is playing football, so he is teaching himself to position his body so if the ball is coming towards him he can catch it with his chest. He is simply amazing.

“He is back with his grassroots team and with Barnsley FC’s development squad on a Friday evening.

“He still suffers from the effects of his condition and frequently battles against aches and pains, numbness and the fear that he will, one day, be told he cannot play again, yet he keeps going, refusing to be beaten by it.

“I am so proud of him and for that he deserves to be recognised.”

Do you know someone worthy of a Young Champions award? Click here.