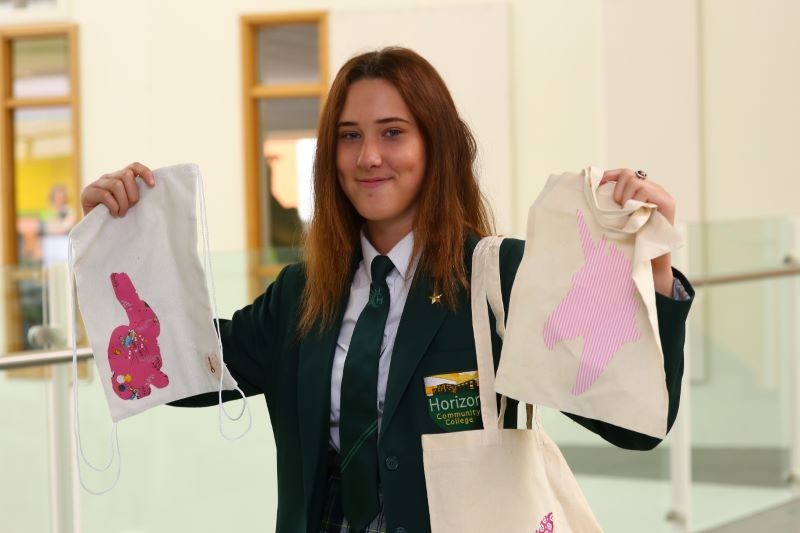 A YOUNG girl who aspires to become a millionaire by creating tote bags has been commended for her entrepreneurship.

Alice Roberts, 13, of Wheatcrofts, Barnsley, creates personalised tote bags and sells them at craft fairs and at her school.

The Horizon pupil launched Totes 4 You as part of the ‘I Know I Can’ challenge, a scheme which aims to build confidence, and teach students the core skills of setting up a business and making money.

Alice’s mum, Deborah Parry, said: “Alice is extremely enthusiastic and since she’s launched her business she has not looked back. She creates everything from scratch and always uses her own initiative.

“As part of the I Know I Can challenge she had a stall on Barnsley Market where she spent the day selling her stock and she just took it in her stride. A lot of the other participants were groups and she was the only one working by herself and her confidence could be seen a mile away. She wasn’t afraid to call people across to her stall and she was even happier when she saw the money she was making, but she has been very wise with it and invests it back into her business.

“Alice has also been to craft fairs with her sister and at the most recent one at Easter, she took the opportunity to sell her bags, and charged an extra £1 to receive an Easter egg with the purchase.

“As you can imagine, the deal was extremely popular with the kids that were at the fair, but it just shows how business-minded she is. She says she wants to be a self-made millionaire and I honestly think she can achieve it if she carries on how she is.”

Lianne Middleton, the careers and enterprise co-ordinator at Horizon, said: “Alice is very focussed and she has committed an awful lot of time, both in an out of school. Her work has paid off because she is learning how to run a business and also how to work independently.

“She recently pitched her business in a Dragon’s Den style competition as part of I Know I Can and she will be finding out shortly at an awards ceremony how well she did. She is very creative and that is why I nominated her for a Young Champions award.”

Deborah said: “I am so proud to hear that her work has been recognised and she has been nominated for Young Champions.

“She works so hard and the only help she asks for is for me to order her materials online.

“As soon as they arrive, she’s off creating her next masterpiece.

“It’s brilliant what she has achieved and she deserves this.”