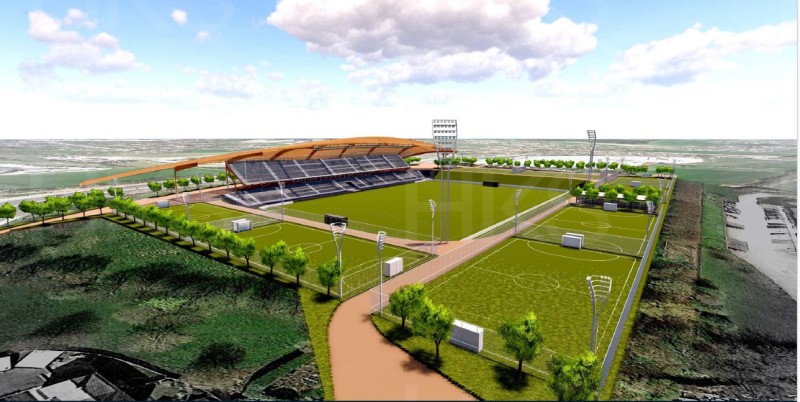 Barnsley Women’s Football Club have submitted plans to the council for a £4-5million development which they believe would create the first football facility in the country dedicated solely to women’s and girls’ football.

The club is hoping to move from its current base at Oakwell to a 7.5-acre site off Broadway, which was formerly the football pitches used by Kingstone School. The Reds hope that the 2,500-capacity stadium – which would also house a gymnasium, changing rooms and a hospitality lounge – could be finished by September of next year.

The club is aiming to secure the funding through grants and private investors from the UK and overseas.  The proposal says female footballers have been ‘playing second fiddle’ to men’s football and that the club would like to create a legacy for women’s and girls’ football in the town.

They want to be averaging crowds of more than 1,000 eventually while their short-term aim is to rise from the fourth tier to the top two divisions of English football within the next four years.

Club owner Steve Maddock told the Chronicle: “This would be the first purpose-built women’s football stadium in the UK, if not the world. We believe it would put Barnsley on the map in women’s football and it would be fantastic for our town to be leading the way.

“Women’s football is really growing in popularity at the moment, with England getting to the World Cup semi-final, and we want to be at the forefront of that in our area.”

The proposal submitted to the council adds: “It is our belief that this land would provide us with a wonderful opportunity.  The club would be happy to purchase the land for a fair price of course, however, and alternatively, should the council prefer to transfer land to a charitable trust, we would be happy to consider this option also.”

The stadium plans have been drawn up by Alan Kypriadis, who worked on projects to create training facilities for Manchester United and Chelsea as well as the Al Rayyan Stadium for the 2022 World Cup in Qatar and a new ground for French top flight club Nantes.

There would be eight five-a-side pitches surrounding the main pitch, while Barnsley Schoolgirls and South Yorkshire Schoolgirls would be invited to play there.

The council is also considering two sites on Broadway in Kingstone for a new 900-pupil school and Maddock said the club would be willing to share the site.

Maddock added: “All the men’s football clubs in Barnsley have been here long-term but there isn’t a long-standing women’s club with girls’ youth sides. The facilities we have been using have not really been designed with women in mind and to have our own venue for women’s football would be a huge step forward.

“We are calling it a ‘home and venue’ rather than just a stadium. It wouldn’t just be for teams from our club, it could be open for all girls’ football teams in the area to use. It would also be a community facility which could be used for various sporting and non-sporting events.”

The women’s club currently has some use of the Oakwell 4G pitch, where the first team play most of their home games.  The proposal adds: “We do not wish for women and girls to continue to play ‘second fiddle’ when it comes to access to facilities and, should we not pursue our ambition to secure our home and venue, this will always likely be the case.”

Owner Maddock added: “We would still maintain a strong relationship with Barnsley FC, who have been fully supportive of our club and women’s football.  We just feel that the time is right to make our own way.  Hopefully both clubs can continue their recent success and both make the town proud. We’re hoping to build a fanbase and get the people of Barnsley supporting their women’s team as well as their men.” T

he Reds are due to play their first pre-season friendly of the summer against Stoke City on Sunday at Oakwell from 2pm.  They are hoping for promotion from National Premier League Division One North, having finished third last season while they won the Sheffield Senior Cup. This season they will be hoping to secure the one promotion place to the third tier.   They are managed by Chris Hamilton who had a 15-year career as a player in Scotland.

Maddock said: “We want to finish first.  “We might have done it last season but we lost our first four games with a new team and management staff. We are making a few new signings this summer to improve on last season’s team and it should be a very exciting campaign.”