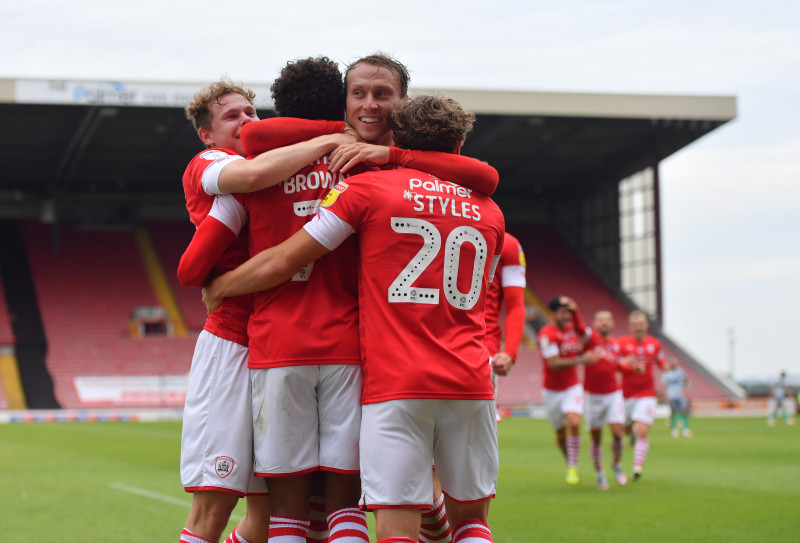 Barnsley go into one of biggest weeks in their recent history having made a magnificent return to action over the last fortnight.

One draw, two wins, three clean sheets, three goals scored and seven points gained. As good a re-start as could have been reasonably expected.

Those games have been against sides who began playing again with genuine ambitions of being in the Premier League next season as the Reds beat QPR and Blackburn Rovers either side of a goalless draw with Millwall which now looks like a valuable point. To only make one change to the starting line-up in three games at the start of a nine-game month is a big risk for Gerhard Struber to take but it has paid off spectacularly.

The stats are staggering for the last eight games, either side of lockdown, which have brought half of Barnsley’s ten wins this season as well as as many clean Championship clean sheets as in the previous 52 matches at that level.

Barnsley would be 12th if the campaign started when Struber took over in November while they are in the top six of the ‘lockdown league’ over the last three games. They could not realistically be going into a make or break week in better form.

They play three sides who have joined them almost all season in the battle to stay in the Championship as they visit Stoke City tomorrow and Luton Town on Tuesday then host Wigan Athletic a week tomorrow.  It is set to a be a mentally and physically exhausting week as it is midway through a run of eight games in 25 days, in mostly very warm weather, and also involves almost 500 miles of travel.

Following this huge trio of fixtures, Barnsley complete their season against three of the current top five as they visit Leeds United then host fifth-placed Nottingham Forest before ending the campaign at Brentford on July 22.  With Leeds seemingly closing in on automatic promotion and Brentford hoping to join them, it looks a very difficult finale which puts even more pressure on the next eight days. This week could have a huge impact on everyone at Oakwell as the club looks to remain stable in emergency circumstances caused by the coronavirus crisis and the lack of fans in stadiums.

The financial difference in staying up and going down is thought to be roughly £7million, mainly in TV deals, ‘solidarity’ payments from the Premier League and larger second tier attendances.  If they go down, the Reds want to receive that money anyway as a special ‘parachute’ payment due to the ‘unbalanced’ season, but it is seen as unlikely. A relegation could launch Barnsley’s owners into a tangle of legal fights surrounding the possible points deductions handed down to clubs who have breached financial fair play rules.

A second drop to League One in three years might alter their plans for the Reds and shift their focus to their growing portfolio of other clubs around Europe, while it would certainly lessen their popularity with many supporters who see last summer’s transfer dealings as the cause. Should Barnsley go down, they may face a long wait to play football again as League One clubs might not be able to afford to re-start until fans can be allowed back into stadiums.

This week will also be vital for the future of Struber, a coach who has increased his profile since moving to England in what – almost a year after it started – is still in his first season in charge of a team in anything other than youth football or the Austrian second tier. He has been coy about his future and, while nothing is certain, seems unlikely to go from the Europa League in late 2019 to the Leasing.com Trophy a year later if Barnsley go down. Whether he intends to stay or not, he will be desperate to have a remarkable escape from a seemingly impossible situation on his CV as well as hero status at Oakwell.

A bad week could also lead to an exodus of players, not just the Germans and Austrians brought in by Struber and predecessor Daniel Stendel, but those who have excelled in the Championship this season such as Cauley Woodrow, Conor Chaplin, Jacob Brown and Alex Mowatt.  Some of them may leave even if Barnsley stay up, although there is expected to be fewer big-money moves following the coronavirus crisis.

The more important question in the short-term is: if not Barnsley, then who?

Tomorrow’s opponents Stoke City look the most obvious candidate after a terrible re-start so far and Barnsley victory at the Bet365 Stadium would see the Reds go above the Potters.
Tuesday’s hosts Luton have joined the Reds in the bottom two in recent months, but they kept their hopes of survival alive with four points from games at Swansea City and leaders Leeds.

Wigan Athletic appeared to be well clear of danger as the form team in the division before entering administration on Wednesday and facing a 12-point deduction.
Last night, a Hull City side who had collected just three points from their last 13 games, moved out of the relegation zone with a 2-1 win – thanks to an injury-time strike by Mallik Wilks who they signed from Barnsley earlier that day – to Middlesbrough, who had been  expected by many to stay up following the appointment of Championship veteran manager Neil Warnock but are now 21st.

Huddersfield Town eased their worries slightly with a 3-0 win at Birmingham City on Wednesday.  Charlton Athletic, who spent the break in the drop zone, have – like Barnsley – collected seven points since the re-start without conceding. It could be shaping up to be a classic finish to the season, reminiscent of 2013, and Barnsley will hope for the same outcome.