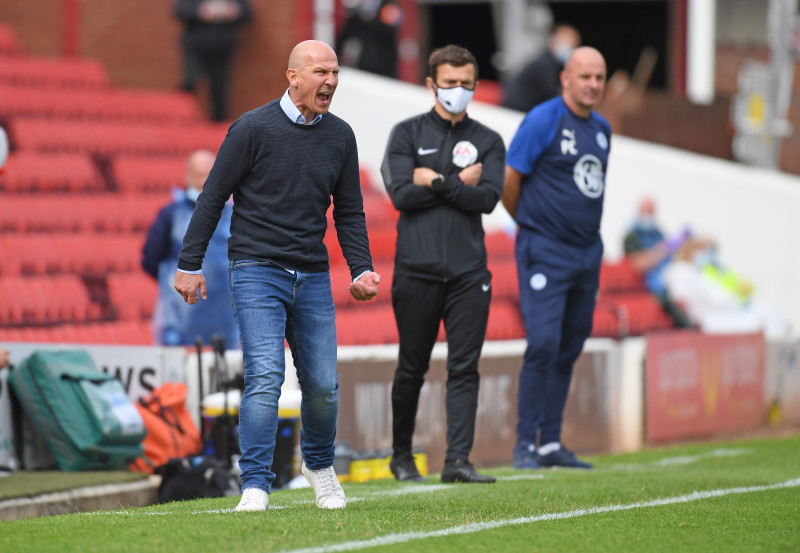 Gerhard Struber was frustrated with his side’s attacking play after they drew 0-0 at home to ten man Wigan Athletic.

The Reds had the better chances and were on top for long spells but could not find a goal. Head coach Struber said: “I am very happy with many parts of this game, with our defensive structure and pressing triggers. We won many balls and and had so much control.

“Also, like the Luton game, we had many chances which is our big topic at the moment – we cannot use our best chances. This is an issue that my strikers are not sharp enough to score goals.

“We had to win this game in the last 20 minutes, with the overloads we had. It was not always necessary to shoot from 20 metres. We need a better balance and timing for the final pass. We need to be more cool and smart when we have chances. That was the only thing that was lacking.”

Wigan’s Danny Fox was sent off after 71 minutes for a high tackle on Elliot Simoes. Barnsley thought that substitute Joe Gelhardt could have joined him seven minutes later for a lunge on Callum Styles while, in the first half, Antonee Robinson received only a yellow card for sending Kilian Ludewig somersaulting in the air.

Struber said: “It was absolutely a red card. But the foul on Callum Styles was also a clear red card, with both feet. This was absolutely clear.  Wigan were out of order with the way they fought in the game. The first half tackle on Kilian Ludewig was maybe also a red.”

Midfielder Marcel Ritzmaier added: “ It was difficult to play against Wigan. We needed to play in our style but there were difficult situations with very strange tackles. That is part of the game and it was a good game. We go for the win in every game and we are disappointed but now it’s time to recover and look forward to the next game."

Most of the other sides in the relegation fight also failed to win so Barnsley are now two points from safety, when Wigan’s 12-point deduction for going into administration is applied, with three remaining games against top five sides Leeds United, Nottingham Forest and Brentford.

“After the lockdown, we are in the top ten or 12 teams and the boys do everything they can at the moment. In our situation we need points. We know we have big teams in the next games but I can remember we have picked up points against big teams. When we play like we did today and against Luton, we will also find chances against Leeds, Nottingham and Brentford. I hope a little luck comes back.”