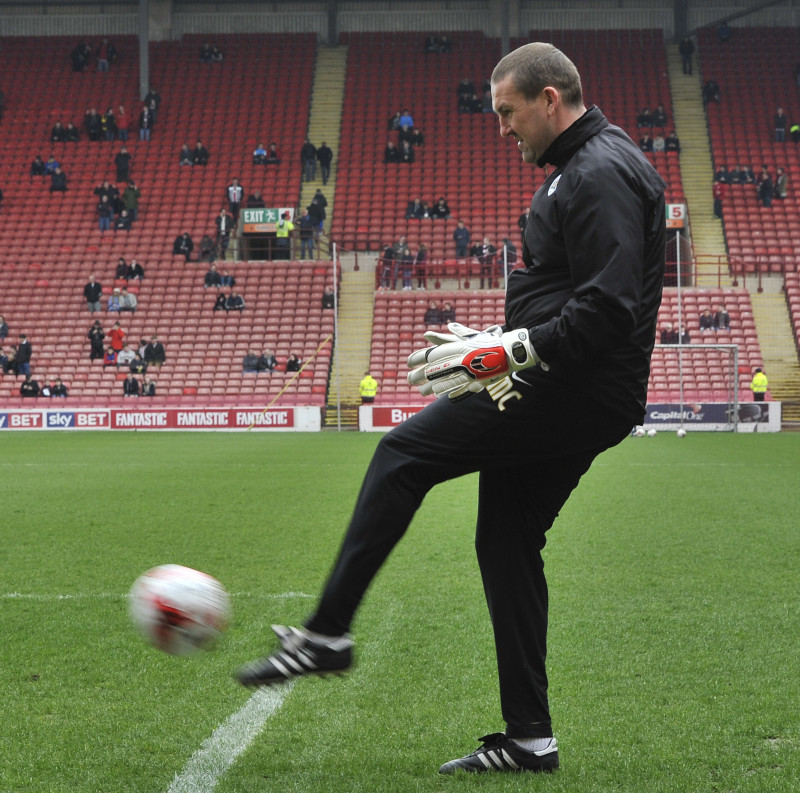 Mark Crossley is hoping that both his former clubs Nottingham Forest and Barnsley achieve their goals this season after they meet on Sunday at Oakwell.

The 51-year-old former goalkeeper from Hoyland, nicknamed ‘Big Norm’, played more than 300 games for Forest from 1989 to 2000, including the 1991 FA Cup final in which he saved a Gary Lineker penalty.  He never played for his hometown club Barnsley – after an unsuccessful trial when he was 15 – but he did join them as Danny Wilson’s goalkeeper coach in March 2014, then left in the summer of 2015.

Crossley told the Chronicle: “I would love Forest to get back into the Premier League. I am hoping they will have secured a play-off spot by Sunday so I can have a word with a few of the lads there and say: ‘come on, let Barnsley win.’  I really want Barnsley to stay up, they are my hometown club and I worked there. They have done remarkably well to get in the Championship.  The manager (Gerhard Struber) has had them picking up a lot more points after he took over.

“We all know you have to have finances in football to survive and Barnsley’s budget is one of the lowest in the Championship.  It’s going to be very difficult but, if they can stay in the league, it would be massive for the club and the town. It’s frustrating because I have seen them play a few times and been really, really impressed with the way they play.”

Crossley arrived at Oakwell months before their 2014 relegation to League One which prompted a change in approach to developing youngsters that soon turned into a rule of only signing players aged 25 or younger under Wilson’s successor Lee Johnson, whom Crossley also worked for.  That policy is still in place today, with a few rare exceptions.

“I really enjoyed it at Barnsley. I liked the way that Patrick (Cryne, former owner) was trying to do things with a new system based on stats and development. But it’s always handy to have some players who have been around the block and can run a dressing room. Although the development of young players is a great idea, I believe you need more experience in there as well.”

One of the players Crossley helped develop was goalkeeper Jack Walton who arrived at Oakwell as a 15-year-old in 2013 and is now the Reds’ number one.  He said: “I thought then that he could be Barnsley’s number one. I always used to say to him: ‘if you want any extra work, knock on my door.’ I have to be honest, I got sick of him knocking on my door. But it’s a brilliant thing because the kid is a hard worker and wants to learn. He and his family were determined for him to do well.  “He had a lot of talent and a lot of confidence as well, which you need as a goalkeeper. I am really glad that he’s doing so well.”

Crossley has spent 2020, including the lockdown period, walking hundreds of miles in the English countryside and inspiring people who are battling mental health issues. He lost his job as a coach at Chesterfield FC at the start of the year and that, as well as his father Geoff’s cancer diagnosis, started a battle with mental health issues which he has faced through the help of walking.  He, along with several other former footballers, run a non-profit organisation called Walking And Talking Charity Hikes (WATCH) which raises money for charities.

Crossley said: “It has gone to another level that we never expected.  “We are hoping to raise £250,000 but I would like to think we will do even better than that. Our intention is to distribute that money to small mental health organisations who really need it. We would also like to get the mental health side of the NHS involved.  I was good friends with Gary Speed (Crossley’s former Wales team-mate who committed suicide in 2011) and I now realise what he must have been going through.

“I lost my job at Chesterfield on January 2 so I was out of the game for the first time in 33 years. I was ready for a break but coming out of the routine of football was hard for me. My dad was diagnosed with cancer at the same time. I hit a really low point. I was struggling mentally. A mate asked me if I wanted to go out for a walk and I really enjoyed it then I started going out on my own. I can’t run because I have had two back operations and my back flares up every time I run.

“I spoke to people like Dean Windass and Chris Kirkland who have spoken publicly about their own battles with mental health problems. We set up a walking group and we meet once a week. We have decided that we are going to climb Mount Kilimanjaro next year.”

Crossley, who also walks on his own as well as with the group, covers 30 to 40 miles a week, six to ten at a time, mainly in the Peak District.  He said: “I do a blog and put videos on Twitter. I have had a lot of feedback from people who say that has helped them when they were struggling. These problems have obviously got worse since the lockdown and now I receive 200 to 300 messages a day because I have opened my social media account so people can message me privately.

“Walking is like therapy. It’s really good for your mind and, for me, it’s the best medicine.  It keeps you fit and keeps the weight off.  I will be doing it for a long, long time.”

Crossley had some good news last week that his father had the all-clear.  “I am really close to my dad and he’s had a very difficult time with chemotherapy.  “He just got the all-clear which is a massive weight off my mind because we weren’t sure he was going to pull through.  “I just couldn’t wait to give him a hug because it’s been hard talking through the window.”