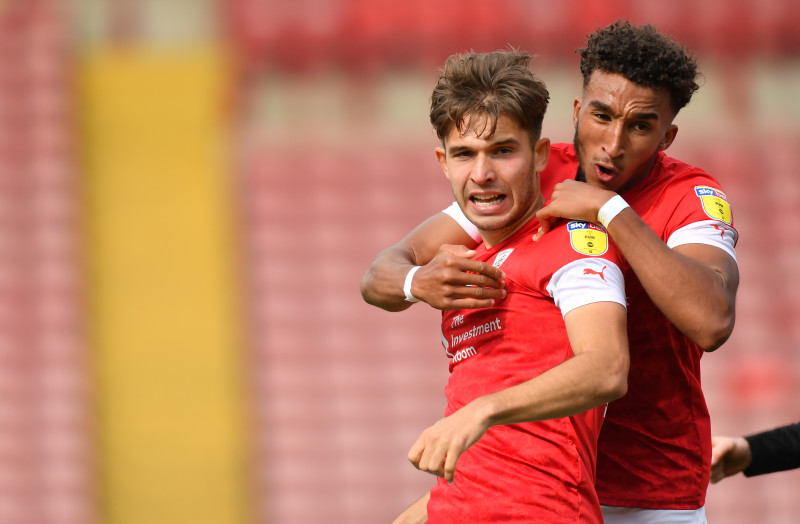 Griffin Park is already a special place for Jacob Brown, after he made his professional debut there in 2016, and he wants to make more memories against Brentford on Wednesday by helping Barnsley to stay in the Championship.

The forward came off the bench as an 18-year-old in a 2-0 win over the Bees in 2016 at the ground he is set to return to in midweek with the Reds needing to win and hope other clubs slip up.
He told the Chronicle: “It’s a big game for the club and for me personally because that’s where I made my debut which is a memory which will stick with me for ever. Hopefully, I can have another good achievement there.”

Brentford were linked with a move for Brown in January. Asked if that has played on his mind, he said: “No. The only thing I am thinking about and all the players are thinking about is performing as well as we can and getting the three points.”

Brown was relegated out of the EFL with loan club Chesterfield in 2018 at the same time as Barnsley were dropping down to League One. He said: “There is no worse feeling, you work hard all season then to get relegated is not nice. That season, Barnsley and Chesterfield went down so it was even worse for me. It is something that no one wants to do and we’re all going to be fighting our hardest on Wednesday to make sure that doesn’t happen.”

Brown was rugby tackled by Barnsley coach Adam Murray during the wild celebrations for Patrick Schmidt’s winning goal against Nottingham Forest on Sunday. He told the Chronicle: “I have watched it back a few times and I think it looks worse than it was. I was running over and I saw Muz and I thought ‘I need to be careful here because he’s a big guy.’ He took me straight to the ground. But I am alright.

“That moment was amazing. You would think with there being no fans, that there is no atmosphere but, when it went in, it was such a good feeling because we knew how much it meant.”

Brown has netted three goals in 39 Championship games this season but has nine assists. His fellow strikers Cauley Woodrow and Conor Chaplin are also going through lean spells.

“As a striker, there is pressure in every game is to score - that’s your job. It’s not through a lack of trying in games and training, we’ve had patches in the season when we’ve been scoring but not keeping clean sheets but now it’s the other way around.

“Hopefully on Wednesday, we keep a clean sheet and score. It’s my first season in the Championship and I have contributed with quite a lot in assist and goals. Throughout my career, I just want to keep getting better.”

Brown admits Wednesday’s game, against a side who could reach the Premier League, is the biggest of his career. He added: “We have beaten teams like Fulham home and away and done well against other top sides. It’s just a case of performing as well as we can and hopefully getting the result.

“It will be a big pressure game for both clubs and hopefully we can use that to our advantage.  If we did it on Wednesday, it would be something that we deserved. I know we haven’t had the best results but we have worked really hard.

“It’s definitely my biggest game, it is for everyone with what’s at stake. It’s a massive moment, such a big time for the club and we need to relish it.”

Brown is likely to come up against centre-back Ethan Pinnock who played with him at Oakwell last season before moving to Brentford. He said: “Eth is a class player. It will be tough but I will be looking forward to it. Whoever we were playing, the goal would be to win.”

Brown, from West Yorkshire, knows plenty of Leeds fans and is hoping the champions can help Barnsley by beating fellow strugglers Charlton Athletic in midweek.

“They’ve been unreal all season so we’re hoping that they can perform on the last day and help us out. We’re focusing on our game but we hope other results go our way.”