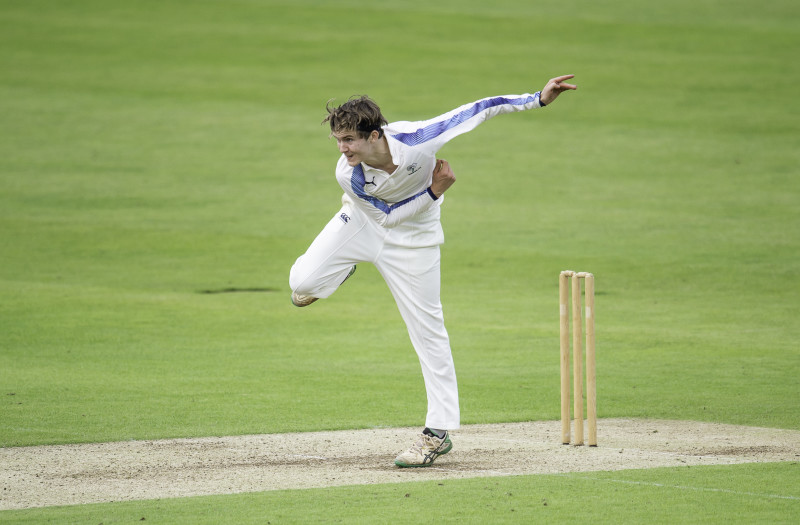 Yorkshire CCC spin bowler Jack Shutt was impressed by the heroics of his hometown football club Barnsley, for whom his father used to play, as he prepared for the county cricket season which begins tomorrow.

The 23-year-old from Elsecar, who broke into the Headingley club’s first team last season, is the son of Steve Shutt who played for the Oakwell club in the 1980s before a career in non-league football and local cricket.  The Reds stayed up last week with injury-time victories over Nottingham Forest and at Premier League hopefuls Brentford.

Jack told the Chronicle: “I watched the Brentford game.  “I haven’t watched that many games recently but I watched that one.They were quality, battling for everything. To score last-minute winners two games in a row is absolutely incredible.”

Shutt will now hope to show similar qualities in the shortened cricket season which will see the 18 counties split into three groups of six for five four-day matches in the Bob Willis Trophy, then the Twenty20 Blast begins on August 27.

Yorkshire – who furloughed their players before bringing them back for pre-season in July – are due to begin tomorrow against Durham CCC at Chester-le-Street. That is where Shutt made history in August last year by taking five for 11 in a Twenty20 match, the club’s second best ever figures in that format.  Shutt – who played in the pre-season friendly against Lancashire last week, taking one for 43 off 19 overs – is hoping to be involved in both the white-ball 20-over format as well as four-day games which are played with a red ball.

He said: “I have ambitions to play all formats for Yorkshire. I have worked pretty hard with both the red ball and white ball over the winter and made decent progress.  We’ll see what the selection of the team is.”

All of Shutt’s seven games for Yorkshire have been Twenty20 fixtures but – after breaking into the side last summer before being injured – he was hoping 2020 would be a big year for him. He said: “It has been frustrating but we have two months of cricket to play so hopefully I can play as much as possible. I am sure there will be chances because there will be so much cricket.

“I am hopeful of kicking on this year.  “There will be significantly less overseas players so there will be opportunities for all English players across the country. There will be a lot of injuries as well because most counties have been furloughed then they have only had the four-week build-up.”

Shutt came through at Elsecar CC, where he has returned during the lockdown to train on his own. He said: “The last few months without cricket have been very strange. I am used to always playing cricket from April onwards. Early on, in March and April, I was just doing a home programme that our strength and conditioning coach gave us and going on runs.

“When the government said you were allowed to practice on your own, I was going across to Elsecar Cricket Club to keep myself as sharp as I could. Now it’s nice to be close to back to normal. It’s been really good to be back training and playing friendlies.

“County cricket definitely needed to come back as soon as possible. It is massively dependent on spectators and a large amount of the income comes from that. The main differences will be playing without fans but I think the lads will get used to that pretty quickly.

“Hopefully there will be some fans later in the season. The new ball is going to be taken a bit later in red ball cricket, which might give spinners more overs, and the days have been shortened a little bit to prevent injuries.”