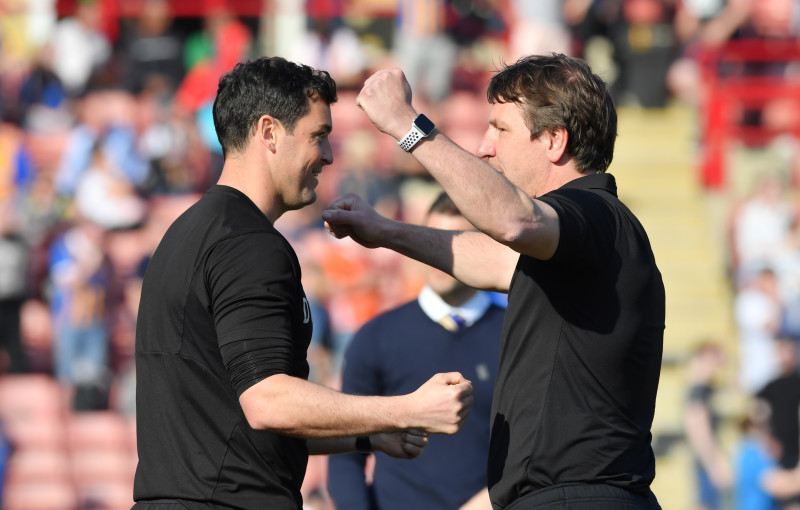 Dale Tonge says he and Daniel Stendel were delighted that Barnsley stayed in the Championship despite the ‘mixed emotions’ of not being able to ‘see our job through.’

Former head coach Stendel, who led the Reds up from League One last year, was sacked in October after collecting six points from 11 games.  Reds fan and former Barnsley player Tonge, from Goldthorpe, had been Stendel’s assistant after coaching in the academy then also assisted caretaker Adam Murray.

But Tonge left days after the appointment of Gerhard Struber who masterminded the astonishing final day survival last month. Tonge told the Chronicle: “I have spoken to Daniel a lot. In the last few weeks we were talking about whether Barnsley would stay up. I am the eternal optimist and always said ‘yes’ but Daniel, being a pragmatist, was a bit more unsure.

“Daniel still loves Barnsley, almost as much as I do as a born and bred fan. It’s well-known he had an affinity with the fans and he wants the best for them. He was really happy they stayed up because it’s almost the same squad and staff he worked with and he had really good relationships with them.

“There are definitely mixed emotions because, ultimately, it’s my club and I wanted to be there. I wanted to see the job through but I am ecstatic that they are in the Championship for next season.”

Tonge says he always believed the Reds players could achieve a shock escape. He said: “Like every fan, I was just nervous because of the disappointment of playing the teams around us but not performing as the manager would have wanted them to. After the Wigan game, there were a lot of doubts because it looked like they had run out of energy.

“There was a lot of negativity from the fans but I know these players can dust themselves off very quickly.  Ironically, the loss at Leeds probably galvanised them because they went toe to toe with the best like in the home game. They knew they could win the last two games after that, which they did.  I was so pleased for the players.

“Daniel let me take on a lot of the responsibility for talking to the players and getting to know them and their families so I know most of them really well.”

Clarke Oduor, who got the winning goal at Brentford, had been scouted by Tonge at Leeds United before moving last summer.  He did not play under Stendel but was given a chance by Struber.

“Clarke has always been a fantastic talent. He just needed the opportunity. We wanted to play him sooner but it was down to the system change and other players. Gerhard has been justified with the players he has picked, especially the younger players. It’s great to see young players thriving at our club and hopefully they can kick on.”

After gaining promotion last summer, Tonge and Stendel saw several of their stars sold on and a series of very inexperienced players brought in. He said: “The inexperience was probably part of why we struggled.  We asked for older players but the recruitment is done in a specific way with the aim to sell on in the future.  We knew that would be the case.

“I hope there isn’t a big turnover of players this summer, that needs to be a lesson learned from last year. If they can keep the core of that squad with maybe a couple of additions, I am sure they can have a positive season.”

Tonge was heartbroken to leave his hometown club.  He said: “It was an awful situation for me. The person who gave me an opportunity had been sacked and then I had to help lead the club in his absence before I was relieved of my duties. I am not a bitter person.

“Things could have been handled totally differently but the club will always have my best wishes.  “The people that run the club have to make hard decisions. I knew after leaving the security of the academy and going into first team football that that could happen, it’s just a shame it ended like it did.”

On Struber, Tonge said: “I only met him once, when he was having a language lesson. I had been relieved of my duties at that point but I wanted to wish him all the best and let him know that I could help him with information on players if he wanted it. He’s done a very good job to keep Barnsley up.”

Stendel and Tonge moved to Scottish Premier League club Hearts and, despite some good results such as a win over Steven Gerrard’s Rangers, they finished bottom of the division which was settled on a points per game ratio. They both left the cash-strapped club at the end of the season.  It is a shame how it ended at Hearts but it was a great opportunity for me to learn a new club and a new league.

“You are only measured by your experiences. I have learned a hell of a lot in the last 18 months, both good and bad, but I believe it will make me a better person and coach.  I take every negative as a chance to take some positives out of it. Hopefully that moves me on to a new job.”