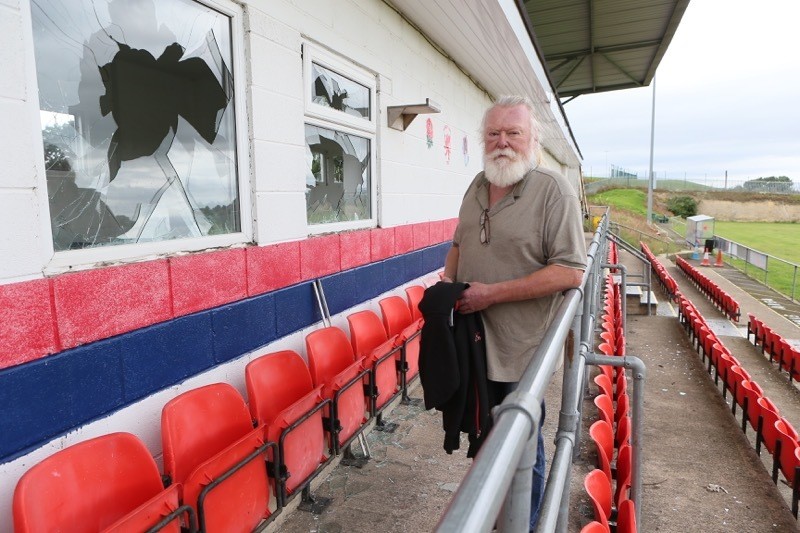 A HISTORIC sports club struggling to keep its head above water has had its future plunged into more doubt after vandals wreaked havoc in an overnight wrecking spree last weekend.

Bosses at Shaw Lane Sports Village - who earlier this summer said they were facing the ‘greatest threat’ to survival since the site’s opening in 1862 because of a collapse in revenue caused by lockdown restrictions - have been left reeling after paint was daubed across stands, panes of glass broken and equipment damaged.

Dave West, president of Barnsley Rugby Club, was heartbroken to discover the damage at about 9am on Monday, leading him to believe the attack took place the night before.

The weight training room and bar between the two rugby pitches are set to be boarded up completely as the lockdown has left the club fighting to financially recover.

“We’ve been fighting hard to keep this club up and running through the lockdown but it’s been incredibly difficult,” Dave told the Chronicle.

“It’s devastating that a small minority responsible for the damage have deprived the rest of us from local sport returning to the site.

“In the present economic time, it’s almost impossible to come back from this if we were to go ahead with repairs.

“We’ve decided to board up the stand altogether and leave it alone.

“The cost of repairs is no longer possible and the door lock is damaged too.

“It’s a total disappointment after more than 100 years serving the community.”

The damage has been described as the worst seen in recent memory by bosses at the complex and shards of glass strewn across the playing surface has put an end to training returning.

“I believe the vandals found a way inside and threw the weights through the window.

“Those windows were doubled-glazed and were looking in good shape, which is what we wanted for the club.

“This is yet another setback for the rugby club that we weren’t in a position to deal with.

“We rely on public support so now that has dried up because of the ban on sport, we’ve had to clear this mess up ourselves.

“We’ve been the hub of sport in Barnsley for decades, so it’s devastating these mindless vandals spoil it for others.”

He added: “It’s been hard enough to keep this club alive at the best of times but we’re hopeful we’ll find those responsible for the damage.

“This time we’re not starting a public fundraiser for the repair funds.

“Our supporters have been generous enough in the past, so we don’t expect them to put their hands in their pockets again.

“If we were able to repair it, I’m concerned it could invite even more problems. We’d love for the people of Barnsley to back us through this tough time.”

Barnsley Central MP, Dan Jarvis, hit out at the vandals responsible and pledged his support the rugby club - and the whole Shaw Lane complex - going forward.

“I wholeheartedly condemn the appalling acts of vandalism that have taken place at Shaw Lane,” Dan said.

“Those responsible must be swiftly brought to justice and face the consequences of their deeply irresponsible actions.

“I would urge anyone with any information relating to these events to come forward.

“Shaw Lane has been at the heart of community sport in Barnsley for generations.

“During the pandemic I have been working closely with Barnsley Rugby Club to support the ground in exceptionally challenging financial circumstances.”