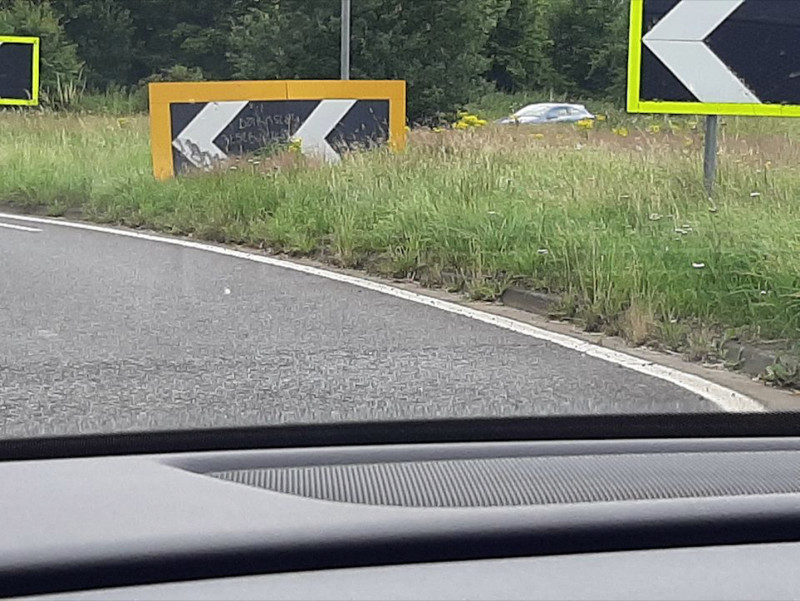 A CONCERNED Mapplewell resident has called for action to be taken at a ‘danger’ roundabout near the M1 following concerns over an obstructed view for drivers.

Anita Hill, of Ibberson Avenue, is campaigning for work to be done at Haigh roundabout leading onto junction 38 of the M1 motorway as she fears the overgrown grass could obscure drivers’ views.

The 53-year-old has said the roundabout’s vegetation, which she witnesses on her drives daily, has not been cut back for months.

She told the Chronicle: “I have some concerns that Haigh roundabout is often forgotten about and nothing is done to the green space.

“When I’m driving to work, my view is obstructed by the grass and I’m uncertain about where oncoming traffic is going, especially at high speeds.

“I’ve raised my worries with the council to see if anything can be done, but no action has been taken yet.

“There’s no one person or group to blame. Drivers also have a responsibility to have safe vehicles and drive with due care and attention and this is often not followed through.

“At the other end of the road, in Wakefield, that side seems to be cut and trimmed more frequently and is therefore safer. I would like to see the same in Barnsley.

“I understand that the council is incredibly stretched at the moment, but I just worry the longer it’s left, the higher chance there could be for a serious accident.”

Anita also believes that the roundabout gives a bad impression of the borough as the overgrown grass looks ‘unappealing’.

“I also think the grass doesn’t look its best and it could give a bad impression for people when they arrive into Barnsley.

“I’m not asking for much, I would just like those responsible to take a proactive approach and clear the area so that drivers can see the full roundabout for a safer drive.

“Action needs to be taken before someone gets seriously hurt.”

“I contacted the council about it then and the matter was dealt with.

“Recently a Mapplewell resident has contacted me over the same issue.

“I raised it at a senior level within the council on July 10 as a health and safety issue and expected it to be dealt with as an urgent priority. “I was surprised that this didn’t happen and chased it up on July 23.

“Given that this is a major motorway junction I am calling on the council to give grass cutting here a high priority for health and safety reasons.

“In addition, the council should be ensuring that visitors to Barnsley by road are given a favourable first impression of the borough.”

Coun Chris Lamb, cabinet spokesperson for environment and transportation, added: “The grass at Haigh roundabout has recently been cut.

“Our teams do visual checks on all our highways to make sure that they are safe and signage is visible.

“This particular roundabout does have some challenges with the motorway network meaning traffic management needs to be in place, which can cause some delays.

“As we continue our recovery from the Covid-19 crisis, we are working towards a more frequent grass cutting cycle. But it should also be remembered that the wet conditions in the last few weeks have encouraged grass to grow more quickly than is usual for mid-summer.”