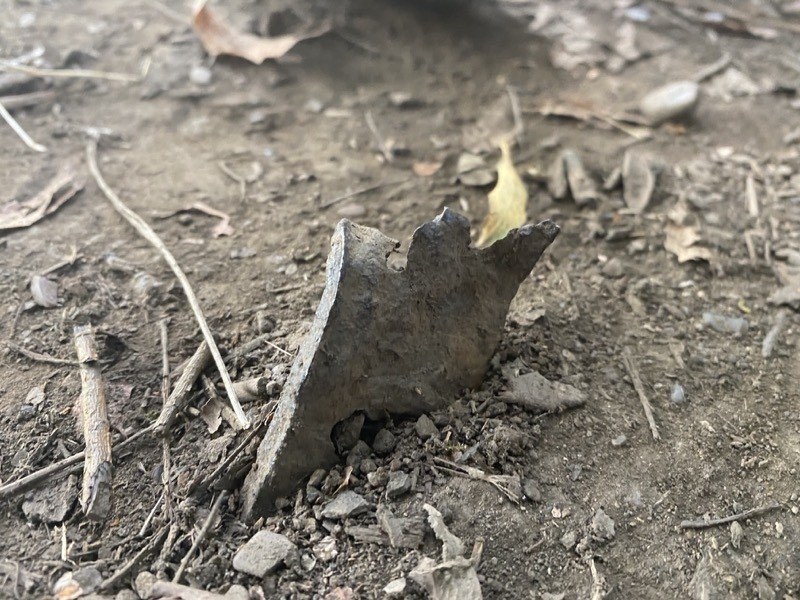 A WARNING has been issued by Barnsley Council after a mother was left bloodsoaked by a half-buried metal spike which is believed to have been dumped at a busy park.

Emily Burgin, of Swaledale Drive in Wombwell, was visiting the park on Bradberry Balk Lane in Darfield with her family on Tuesday.

The group were playing on the rope swing until her mum Diane, 54, was injured by a metal spike which had pierced the ground and into her toe.

Emily, 23, told the Chronicle: “We were enjoying ourselves near a pond, playing on the rope swing and having a good time.

“Then my mum landed on a sharp metal object and her foot was left pouring with blood. We didn’t know what it was but we rushed her home to treat it.

“The object was almost disguised in the ground making it hard to see.

“She’s recovering well but is obviously a bit shaken. I knew it was dangerous and had to report it.

“I contacted my local parish councillors, Kevin Osborne and James Higginbottom, to make sure this didn’t happen to anyone else.

“I’m just glad my mum’s okay and that it wasn’t any worse.”

Kevin raised the issue with council officers and assisted with the search to locate the hidden metal.

“I was contacted by a resident asking if I could help locate and remove a dangerous metal spike from a field near the pit pond.

“It was really important this was removed as it was at risk of injuring someone else.”

Kevin used a mobile app to help narrow down the search as the metal was disguised in the ground.

“The difficulty was locating it from the description the resident provided. I contacted the council immediately and they were very quick and efficient to respond.

“With the help of the mobile app, ‘what3words’, I was able to pinpoint the general area of the metal which helped narrow down the search.

“I think this highlights the importance of social media that really helped us to solve this quickly.

“I’m glad to hear the resident is well and am pleased at the council’s quick response in removing it.”

Coun Chris Lamb, cabinet spokesperson for environment and transport, said: “We received a report from a concerned resident after they had discovered a piece of metal with sharp edges sticking out of the ground, very close to the banks of the River Dove.

“One of our parks officers attended the site swiftly to investigate and remove the piece of metal.

“I’d like to thank the resident who made the report for letting us know so our parks services could resolve the issue promptly.

“Our ‘Everybody Think’ campaign encourages residents to dispose of their waste properly and not to litter, but also help to make sure that our borough stays beautiful for everyone to enjoy.

“We have a dedicated webpage where we encourage our residents to quickly and easily tell us about a variety of issues they may encounter.”