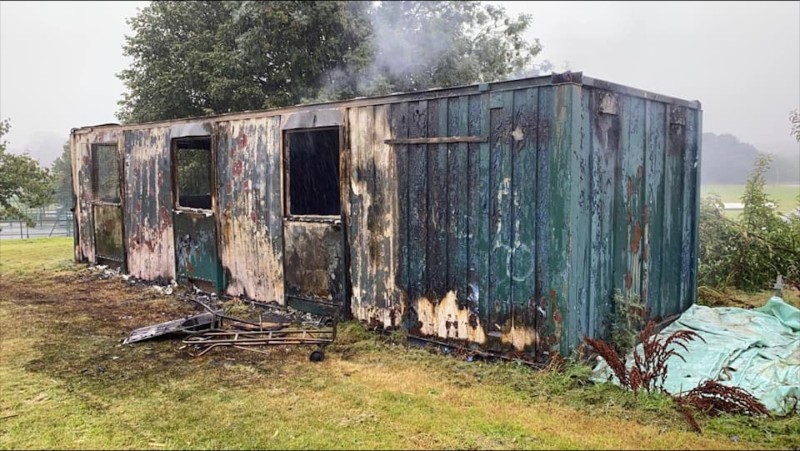 A LONG-RUNNING junior sports club has had its future plunged into doubt after vandals torched its storage unit leaving thousands of pounds worth of damage.

Bosses at Shaw Lane Juniors Football Club were left reeling after the club’s unit was set alight over the weekend, with equipment still inside.

The not-for-profit group, ran by volunteers, have lost an estimated £2,000 worth of sports equipment including nets, goals and line-markers in the fire.

The club, based near Horizon Community College, on Doncaster Road, has launched a public appeal for support after a lack of donations during lockdown restrictions have left them unable to replace the equipment.

Karen Parton, secretary, said: “We were devastated to hear that our club had fallen victim to a mindless arson attack over the weekend.

“Our storage cabin had been completely torched along with everything inside it. It was such a setback for us after just getting back on our feet.

“We’re a not-for-profit club run solely by volunteers from the local community so all the money at our disposable is public funded.

“With the current pandemic, we’ve not had much spare cash so replacing everything ourselves would be crippling.

“It’s not possible that the unit can be repaired, the fire has completely ruined it so it needs replacing entirely.

“This will hinder the children that play which is the biggest shame of all as we want to give them every opportunity possible.

The storage unit was home to the children’s football equipment which has meant the club has had to halt practice.

“I would estimate that there was around £2,000 worth of damage with the amount of equipment that was inside.

“We can’t cover these costs so we’ve had to turn to the public. So far, people have been really generous.

“An online fundraiser has been started that aims to raise £2,000 which is doing great. A few local businesses have also got in touch to offer their support.

“We can’t thank local people enough for their kind words and donations.”

The major damage has meant the club is set to relocate to Wombwell following fears of a repeated incident.

“We’re looking to move to Wombwell Town next year as we can’t go through this again.

“This has caused a massive problem for us so we’re looking to relocate.

“Unfortunately, the incident wasn’t caught on CCTV but I believe the vandals must have climbed over the fence on the field to gain access.

“If anyone has any information, please contact the police so justice can be served.”

Barnsley Central MP, Dan Jarvis, hit out at the vandals responsible and pledged his support to the football club following a spate of criminal activity at Shaw Lane sport complexes in recent months.

“I am deeply concerned about the recent spate of vandalism at the Shaw Lane sports facility, including the appalling incident of arson at the junior football club.

“I would strongly urge anyone with any information to come forward. It is vital that those responsible are brought to justice, and fast.

“Shaw Lane has been at the heart of community football, rugby and cricket in Barnsley for generations.

“I am working closely with the ground to support them through this most difficult of times.”

A spokesperson for South Yorkshire Police said: “We received a call about a suspected arson attack at a storage container on Dodworth Road at around 2.30pm on Sunday.( “It’s believed that the container had sports equipment stored inside.( “Enquiries are ongoing and reassurance visits had been made by the local neighbourhood policing team.