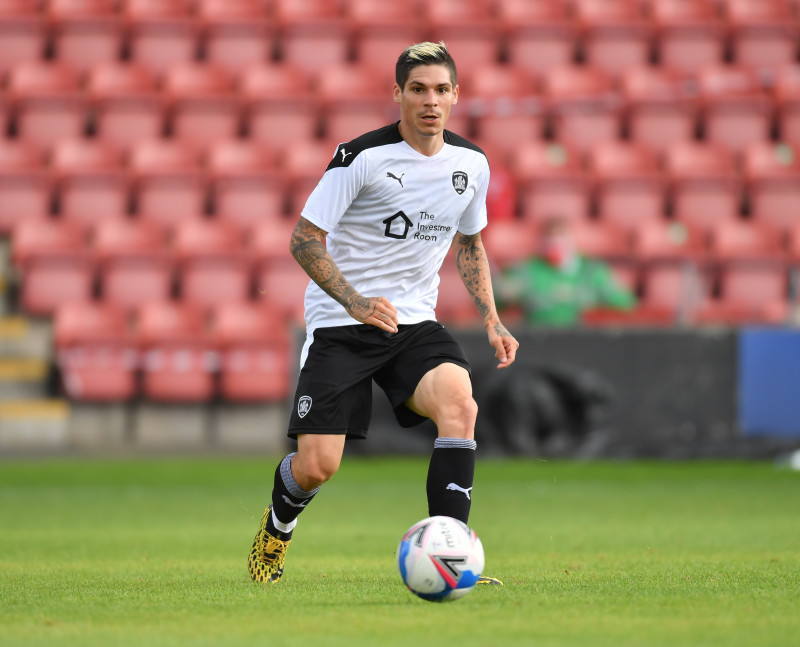 CAN IMPRESSIVE STYLES SOLVE CORNER PROBLEM?
Barnsley really struggled to find an attacking set piece taker last season – trying various different players who could never consistently deliver good crosses. Callum Styles took over that role towards the end of last season and, in the first five minutes in Crewe, put two fine corners, one from each side. His right-wing corner was turned in by Andersen for the opening goal then, seconds later, Jacob Brown volleyed a difficult chance wide at the back post from Styles’ left-wing corner. If the 20-year-old – who was also one of the best players on the pitch as he continued at left wing-back – can consistently produce deliveries like that, then Barnsley will no longer be the weakest side in the Championship from attacking set pieces. Elliot Simoes took over the corners in the second half but – although more eye-catching with dyed blonde hair – could not replicate Styles’ quality.

STRUBER FAVOURING 3-4-1-2
Gerhard Struber arrived at Oakwell with a preferred 4-4-2 diamond formation, which he played for most of the season until changing to 3-4-1-2 towards the end of the dramatic run to safety last month.  While he is expected to use both systems this season, the 3-4-1-2 – with a back three flanked by wing-backs then an attacking midfielder behind the strikers – was in used again at Crewe on Saturday and currently seems to be his favourite system. He has clearly realised that suits Barnsley’s players best at the moment.  Kilian Ludewig and Callum Styles seem to be thriving in the wing-back roles while Mads Andersen is perfectly suited to playing in the middle of a back three which gives Michael Sollbauer and especially Jordan Williams, the chance to bring the ball out from the back. Some fans will always question using top-scorer Cauley Woodrow in the attacking midfield role but, overall, it is a formation with which the players seem comfortable and confident.

FRIESER WARMS UP
One of the main points of interest on Saturday was a first look at new signing Dominik Frieser, although it was clear that no judgement could be made on his value for the team based on 45 minutes in a friendly a few days after he joined the club from LASK Linz. The 26-year-old can play a variety of positions but was used up front in Crewe after coming on at half-time.  He pressed well and helped Barnsley win the ball off the home defence and, on the limited occasions that he had possession, he seemed to move well on the ball and find good passes. He played a part in the second goal, dropping deep to get the ball then move it out to Oduor who crossed for Chaplin to score.

MILLER WING-BACK
Struber decided to field completely different 11s in either half, which led to some players being used in surprising positions. Clarke Oduor is not an obvious centre-back but impressed on the left of the back three – defending well and getting forward to assist the 2-0 goal – while Luke Thomas, usually a winger, caught the eye in central midfield with his passing, movement and a last-ditch tackle on a rare Crewe attack. But the most unexpected selection was the use of strikers George Miller and Victor Adeboyejo in the wing-back roles in the second half. Both players are 22 and have struggled for goals so far in their careers – Adeboyejo has two in his last 49 league games for Barnsley, Bristol Rovers and Cambridge United while Miller struck once in 19 appearances on loan to League Two Scunthorpe last season.  While Adeboyejo was soon moved up front, with Elliot Simoes going onto the left, Miller patrolled the right flank for the full 45 minutes and looked good, running powerfully and linking up with the forward players in some decent moves.  Miller could still be loaned out but, with Jordan Williams currently required at centre-back, he may be the back-up to Kilian Ludewig, having trained all week at right wing-back at St George’s Park while Struber believes that position currently best suits his talents.

JEAN AND JAMES CRYNE IN ATTENDANCE
Gresty Road’s main stand was almost empty, save for a smattering of substitutes, backroom staff, journalists and also Jean and James Cryne.   It had been a tense week for the Crynes who, after their legal proceedings against the Reds’ majority owners were made public in a club statement, responded with a statement of their own in which they claimed they are owed £2.75m by Chien Lee and Paul Conway’s group.   The family, who own 20 per cent of the club, were the only Reds’ owners at the game which not unusual at all since the other group are mainly based overseas.