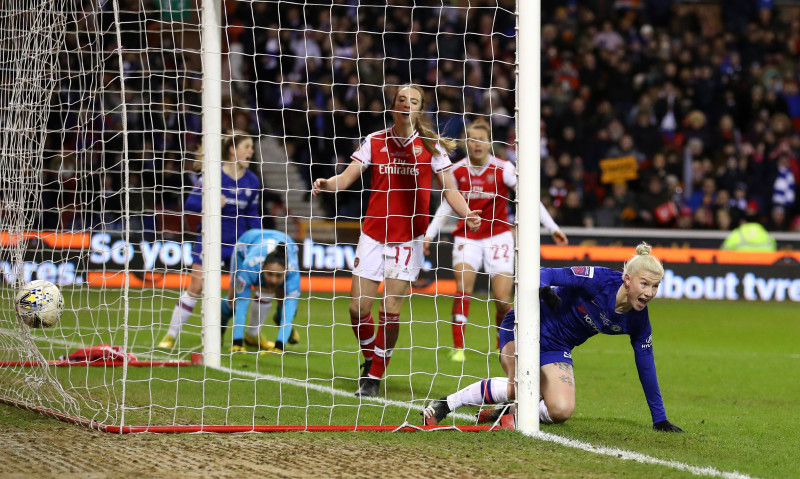 Two England internationals from Barnsley are set to face each other in their first game of the Women’s Super League season today.

Bethany England, who is from Kingstone and plays for Chelsea, is likely to be marked by Carlton woman Amy Turner who plays for Manchester United when the two clubs meet at 2.30pm.

It will be broadcast live on BT Sport and is part of the first round of league games for half a year since the women’s season was cancelled in March due to the coronavirus.

Centre-back Turner told the Chronicle: “I have known Beth for years and she played on the same team as my sister at under ten level.  “She’s a fantastic player and Chelsea’s whole team is really good. It’s good for the town of Barnsley to have us both at a high level.  We will probably be directly up against each other so hopefully I will keep her quiet.  But it will be nice to see her.”

England added: “I have played against Amy a lot and we played with each other for Doncaster Belles. It’s good that there are two Barnsley lasses playing on the top stage. I am sure it will be tough competition when we face each other.”

England suffered a foot injury on international duty at the end of last season. She recovered from that but then her appendix ruptured just before pre-season began which required hospital treatment then, when she returned to training, she suffered an eye injury. She said: “They are my three strokes of bad luck  and I hope it’s all run out for the season. “I am not fully match fit yet but hopefully not far off.”

Chelsea are the reigning league champions while they also won the Community Shield with a 2-0 success over Manchester City on Saturday at an empty Wembley Stadium.  England was their top-scorer last season and is hoping to pick up more silverware this season while adding to her five international caps.

The 26-year-old said: “It was a different way to start the season, in a cup final at Wembley. But we came out on top which was great. I played in the FA Cup final at Wembley in 2016 but we lost. This time it was good to get the win. Last season was a season of a lifetime but I would like to think I can better it every year.

“It’s been a slower start with the injuries but I would like to think I can keep putting in good performances and score the same number of goals if not more. The standard of the league looks a lot tougher this season but we will look to have another unbeaten season and win even more trophies. I want to be back in the running to play for England and also Great Britain at the Olympics next year.”

Turner, 29, has four England caps from 2015 and has been with Manchester United for two seasons after playing for Notts County, Leeds and Sheffield United among others.  She is hoping to play international football again but is focusing first on improving her club’s fourth-placed finish in their first season in the top flight.

Amy said: “We were happy with fourth last season but, this year, we want to break into the top three and qualify for the Champions League.  But it will probably be the most competitive Super League ever. We also want to go on a cup run and compete for silverware. Playing for Manchester United, the club has a history of winning competitions, so we want to add to that.

"We have unfinished business from last season when we missed out on some big games. It was frustrating and we were all disappointed and gutted because we had been on good form but we understood the reasons for cancelling the season.”

Amy is the older sister of Barnsley Women’s FC captain Lucy Turner.  The Reds are in the fourth tier of women’s football but hoping to reach the second tier within the next three years.  Amy said: “I try to go and watch them as much as I can.  “It’s a good standard and you can see the quality is really increasing across women’s football.  “Lucy really enjoys it there and it’s a club on the up.”