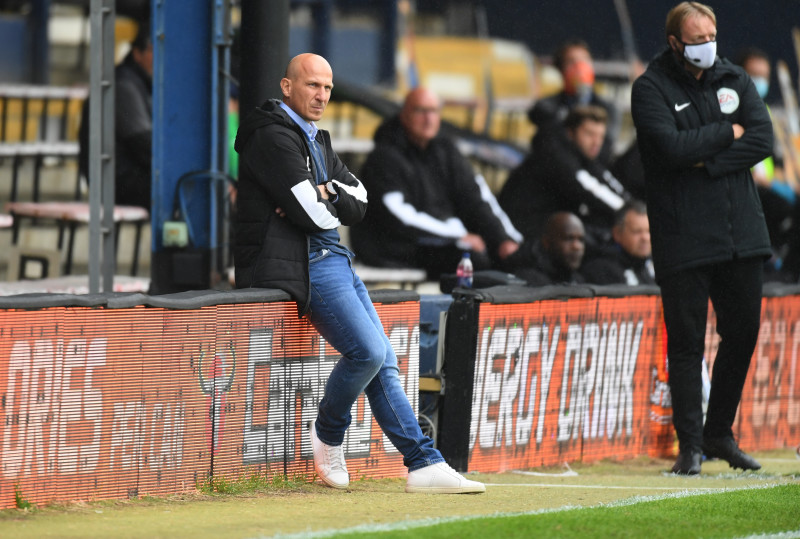 Even in a very unusual year of football – with the calendar, transfer market and matchday experience totally changed by coronavirus – the idea of Barnsley not being one of the favourites to be relegated from the Championship stands out as particularly rare.

But that is the case with none of the major bookmakers putting the Reds in their top six candidates to finish in the bottom three. That is despite them only surviving in the last seconds of last season, and due to Wigan Athletic’s points deduction, while their last five Championship seasons have brought two relegations and two 21st-placed finishes.

That is testament to the reputation head coach Gerhard Struber has built, the number of highly-rated and rapidly improving players in the squad – despite the sale of one of them in Jacob Brown – and also what looks like one of the weaker editions of the Championship in recent years.  ‘Mid-table or maybe even higher’ seems the stock response when players are asked where they think Barnsley can finish next season.

It seems very unlikely that they will repeat the failures of 2013 when, after their last great escape, the Reds began the next season disastrously and manager David Flitcroft was sacked after winning two of 17 games, with relegation following months later.  The pre-season trip to St George’s Park was very reminiscent of the Flitcroft era but he seemed to have a slapdash approach to signings, many of whom were unsuccessful or simply not used, like Lewin Nyatanga, whereas Struber is bringing in players he trusts in positions the Reds need.

The 2013 side were a team of players whose careers had either nearly finished or peaked with that remarkable run to safety.  Only Martin Cranie – who could play at Oakwell tomorrow for Luton Town – continued to be a Championship regular after 2014.

By contrast, many of this squad – who are mostly at the very start of their careers – seem to have the potential to play at this level or higher for years to come.  Maybe not all of them will fulfil that promise but it is a team on the rise and they will only improve from the experience of last season.

The 1-0 win over Nottingham Forest on Saturday was more encouraging evidence that the Reds could have a good season as they delivered an impressive performance to deny their visitors any real chances.  Of course, they need to avoid losing key players to injury – and more sales – as well as the individual errors that plagued them for much of last season.

They will also need to show more resilience within games – they did not come from behind to win last season – continue their improvement with set pieces at both ends of the pitch and find some consistency in a gruelling schedule that includes 13 midweek matches.

They will also need to take their chances better after netting just seven in the final 11 matches of last season.  Before the loss of Brown, the Reds looked capable of adding ten points to last season’s points tally, and having their best Championship season in the 21st century.  They could still do that but need a good final month of the transfer window.  Here are some of the key factors:

You have to go back to 2013 – after another great escape – to find the last summer when the Reds did not cash in by selling a star player.  That was just before Barnsley changed their approach and became a club that developed young players – with part of that business plan being to sell them on for big-money.

Jacob Brown’s sale to Stoke City this week comes a year after Kieffer Moore, Liam Lindsay and Ethan Pinnock followed in the footsteps of Tom Bradshaw in 2018, Marc Roberts in 2017, Alfie Mawson in 2016, Mason Holgate in 2015 and Chris O’Grady in 2014.

Some fans have said Brown will not be a big loss, having netted only three goals in 39 league starts last season, but others have pointed to his nine assists and, at just 22, his potential to improve and be worth far more in a year’s time. He arguably has more potential for growth and improvement than the likes of Cauley Woodrow and Alex Mowatt but, in the short-term, he is not as important to the team as those other two players who are more developed and consistent in their mid-20s.

Clearly the Reds – impacted like every club by Covid-19 – felt the cash they got from Stoke was worth letting Brown leave for and that they can cope without him this season. They have made no secret that will always sell for what they think is the right price. It is a shame as it has been enjoyable to watch him develop over the last six years and he is a likeable young man who seemed to have a genuine love for the club.

Barnsley’s dual focus now must be replacing him correctly and making sure he is the only star to leave this summer. Mowatt, Woodrow and Conor Chaplin must be kept if they want to realise ambitions of moving into mid-table.  The Reds are hunting a striker with more of a physical presence to be, at least, a plan B off the bench – after they used centre-back Aapo Halme in that role in July.

Woodrow and Chaplin both reached double figures last season and looked excellent when paired together on Saturday. New signing Dominik Frieser – thought to have similar attributes to Brown – also impressed as a substitute in the EFL Cup tie.

Patrick Schmidt – who scored against England under 21s this week – may be given more minutes this season after scoring and assisting in injury-time in Barnsley’s final two games of last season.

If Woodrow is used up front more regularly, Barnsley may need to bring in another ‘number ten’ to play just behind the strikers – unless they back youngsters such as Elliot Simoes or Clarke Oduor in that position.

The Reds are clearly after a left wing-back as the players they have been using there, Oduor and Marcel Ritzmaier, are both naturally central midfielders. The middle of the park is an extremely congested area in the Reds squad with this week’s arrival Isaac Christie-Davies joining Callum Styles, Luke Thomas, Romal Palmer, Matty Wolfe, Ritzmaier and Oduor as the players competing to play either alongside Mowatt or in front of him in the number ten role.

The unusually long gap of more than a month between the start of the season and the end of the transfer window has positives and negatives for the Reds. It will give them at least seven matches and plenty of training sessions to assess their team and which areas they need to strengthen.

But it will also mean that anyone who makes a strong start to the season could persuade another club to make a larger bid for them, like Mawson in August 2016 before the deadline was brought forward.


A GOOD START BEFORE VITAL WEEKEND

The first month of Barnsley’s season will be, at least partly, a tense countdown until the weekend of October 16-18. That is when, on the Friday, the transfer window -– in which the Reds are hoping to keep their remaining star players and bring in some new recruits – will close, having been only open for domestic deals since October 5.

The following day, Saturday the 17th, Barnsley are due to host Bristol City in what might be the first game at Oakwell in front of fans in more than seven months, boosting the club’s coffers as well as morale. The plan to get fans back in stadiums next month is now under review by the government after a spike in cases.

That weekend will follow the first international break of the season, before which the Reds will hope to have collected at least a couple of wins from their first four games.  Home fixtures with fellow great escapees Luton Town then newly-promoted Coventry City seem winnable while the trips to Reading and Middlesbrough are unlikely to be their trickiest away games of the season.

By this time last year, Daniel Stendel’s Barnsley had already played six league games and had just returned from an international break for a derby with Leeds United which they would lose to begin their 311-day stint in the relegation zone.

Although they have shown they can recover from a bad run, they will be desperate not to be cut adrift again and to maintain last season’s momentum.

It seems a fairly simple equation. If a head coach, new to the league, the country and language and inheriting a side on a 15-match winless run, can collect 40 points from 30 games – the 12th best tally in that time – then surely he should have them at least in mid-table with a full season to work with them and some new signings he trusts.

It is rarely that simple but the Reds do seem to have hit upon a gem of a coach in Gerhard Struber, whom their recruitment department and board deserve credit for finding.  He is well-respected by the players and staff, who are now sharing his absolute clarity on how football should be played while his forensically detailed approach to organisation and preparation as well as a distinct high-pressing style can be a nightmare for Championship teams.

Struber was reportedly a candidate for the manager’s job at newly-relegated Watford this summer and, should he continue to impress, he will surely be seriously considered for any other vacancy that arises on the Championship’s ruthless managerial merry-go-round.

He will be looking to guide Barnsley into a comfortable mid-table Championship side for the first time since the 2016/17 season under Paul Heckingbottom who eventually left after becoming irritated by the policy of selling key players in every window and the struggles to replace them.

Barnsley have backed Struber by letting him bring in players he knows and more experienced recruits than previously – four of them have played in the Europa League in the last year – but they also need to back him by making sure that the sale of Jacob Brown does not become an exodus of talent.

The average collective spending by the 24 Championship clubs in recent seasons has been about a quarter of a billion pounds but, so far this summer, they are at roughly a tenth of that as clubs cut their cloths in a Covid-stricken world.

As predicted by Barnsley chief executive Dane Murphy, the vast majority of deals have been free transfers or loans with many players moving within the Championship instead of the usual massive-money signings from the Premier League or abroad.

The cheap options are being taken in coaching appointments as well with Bournemouth and Bristol City replacing Eddie Howe and Lee Johnson with their assistants.  That is the trend all the way down the EFL as clubs cannot afford to spend big or cast their net wide for a new coach so take a risk on a former club or a coach within the club.

Sheffield Wednesday will begin their season on minus 12 points while the three promoted clubs are operating on even smaller budgets than Barnsley and have barely played in half a year. There is series of clubs who finished in mid-table last season but could be drawn into the scrap.   It is shaping up to be one of the weakest recent Championships which can only be positive for Barnsley as they look to avoid a relegation fight.