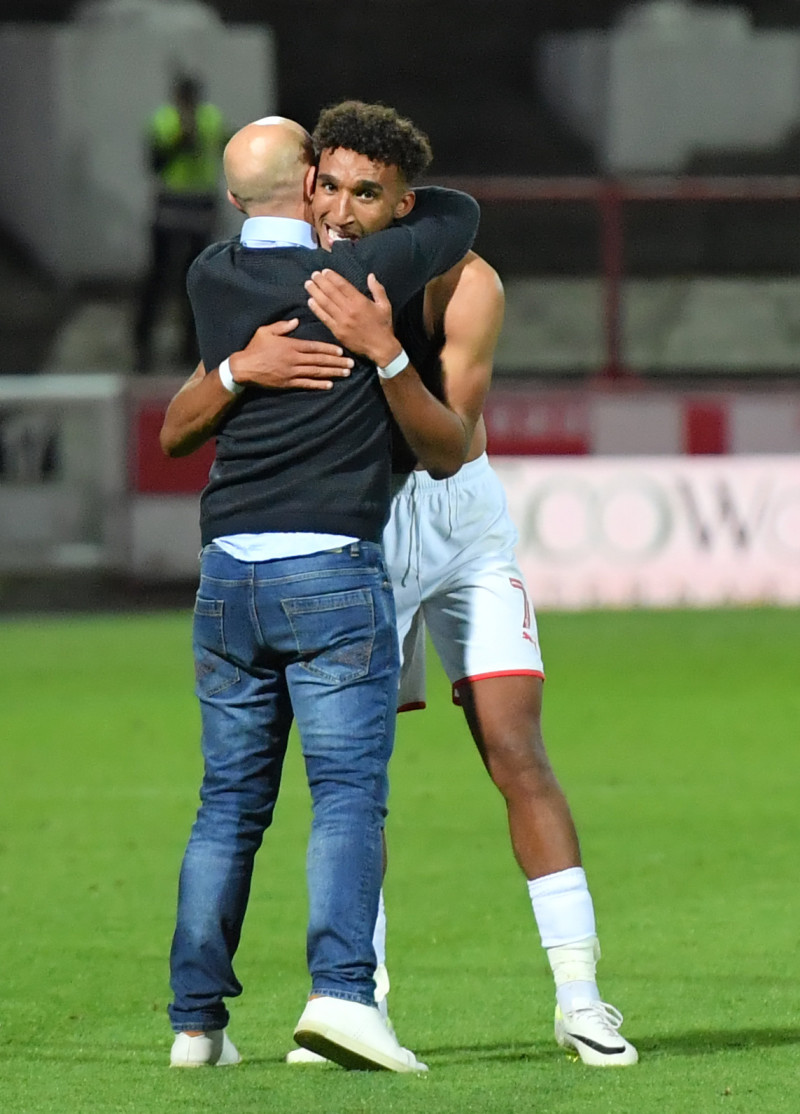 Gerhard Struber is ‘relaxed’ about finding a replacement for Jacob Brown and keeping his other key players ahead of the first league game of the new season.

The Reds begin their Championship campaign tomorrow at home to Luton Town, having kicked off the 2020/21 season with a 1-0 EFL Cup victory over Nottingham Forest on Saturday. Barnsley brought in Kilian Ludewig and Dominik Frieser earlier in the summer then this week added midfielder Isaac Christie-Davies and centre-back Michal Helik.

They are also hoping to bring in at least one striker after Brown moved to Championship rivals Stoke City on Wednesday in a deal worth about £3m with a 20 per cent sell-on clause. They are understood to be closing in on a tall targetman striker from overseas  – with Croatian Sandro Kulenovic one of the options – as well as considering a move for Celtic’s striker Jack Aitchison.

Asked if he was concerned that others could follow Brown in leaving Oakwell, Struber told the Chronicle: “I am relaxed.  “It is not a stressful situation that we lose Jacob Brown. I know Jacob was a very important player last season but we have to trust that we find, in the next few days, the right replacement for Browny.

“It is normal in football that players come and go. It is normal in Barnsley, we develop players and sometimes other clubs have the benefit. It is not easy to handle but I will not cry.  We make the best of the situation but my feeling is we have the right players here and we have to save them. We will find other good players. I am relaxed and looking forward to the season.”

One of the players who may attract attention is Cauley Woodrow who netted 15 goals last season and scored in the EFL Cup on Saturday.  Struber told the Chronicle: “Cauley is very important for us and it is very important that we keep him here.”

He added: “We work to save the rest of the squad. It is not always in our hands. Sometimes when you develop players so quick, they are interesting other clubs. We are a small club with a small budget and we have rules. But the players know they develop in Barnsley.”

Brown – who joined the Reds when he was 16 from Guiseley – played 82 games and scored 12 goals. He broke into the Barnsley team in 2019 at right wing, scoring eight goals in 38 games that season as they secured automatic promotion from League One. He played up front in most of the 2019/20 season, scoring three goals in 39 Championship starts but also registering nine assists which was the sixth most in the division.

Struber added: “I had many talks with Browny before he left. We had a very close relationship and we had a good time together. We spoke about the advantage of him staying in Barnsley. I fought until the last second but sometimes it is not so easy, especially when massive clubs have interest.

"He is ready to play for a big club in the Championship who have a goal to be promoted. It is difficult for me and the team but I think it’s a logical next step, when you have developed a player, that other clubs are interested.”

Kulenovic is a 20-year-old who plays for Dinamo Zagreb and his national under 21s side. The Reds tried to sign him last summer as a replacement for Kieffer Moore when he was at Legia Warsaw.  The former Juventus youth player moved instead to Zagreb but has played just three games in the Croatian top flight. Struber said: “He is an option for us on the market. But we have many players in our focus.  “We will see what happens.”

He added: “For other players who want to develop in England, Barnsley is a big address for them to come to.”

Aitchison, also 20, made his debut for Celtic aged 16 and spent last season with Forest Green Rovers for whom he scored five goals in 28 League Two matches. The Reds are confident they can land Aitchison but do not see him as an immediate first team player so are weighing up whether to sign him for the future.

The Reds are understood to be looking for a left-back, with Ben Williams out for most of the season with an injury. Barnsley’s interest in Ben Whiteman, the Doncaster Rovers captain, appears to have cooled with the two South Yorkshire clubs unable to agree a fee for the midfielder.

Struber said of Whiteman: “He is an interesting player but we have many options. We have no stress. We will search for the right one. He is a good option, but we have many good options. In am in a good exchange with the board and the CEO. We hope we can make good decisions in the next weeks.”

Struber says Hellik’s arrival does not mean he will move out another centre-back, including Bambo Diaby who is still waiting for the result of the investigation into his alleged doping violation. Michael Sollbauer, Mads Andersen and Jordan Williams have started recently in a back three but Barnsley have other centre-backs in Diaby, Aapo Halme and Helik.

Struber said: “I have no more information but I am in contact with Bambo. He is in my plans when we have the ‘go’ but right now we have no go. We have 46 games, as well as the cups, and we have a long and tough season. We need a squad with many players. When we play with a back three we need more options at centre-back.”

Helik is a Polish defender who travelled to Barnsley on Wednesday, which was his 25th birthday. He has signed a three-year contract after leaving Cracovia. He began his career at Ruch Chorzow before moving to Cracovia in 2017, while he has played in the Europa League as well as 134 times in the Polish top flight. He played the first game of the Polish season and a Europa League match at Malmo in Sweden but was on the bench for their latest game on Saturday.

Struber said: “I watched many games of Michal Helik. I see he is a player who has the right quality and skills and experience. He will help us with set pieces. We were a small team but Michal gives us the right height. He can also score goals in attacking set pieces. He has a top character and mentality.”

The transfer window is due to shut on October 5, but clubs can make deals with fellow English clubs until October 16. Barnsley added former Coventry City goalkeeper Corey Addai, 22, to their under 23s squad yesterday.