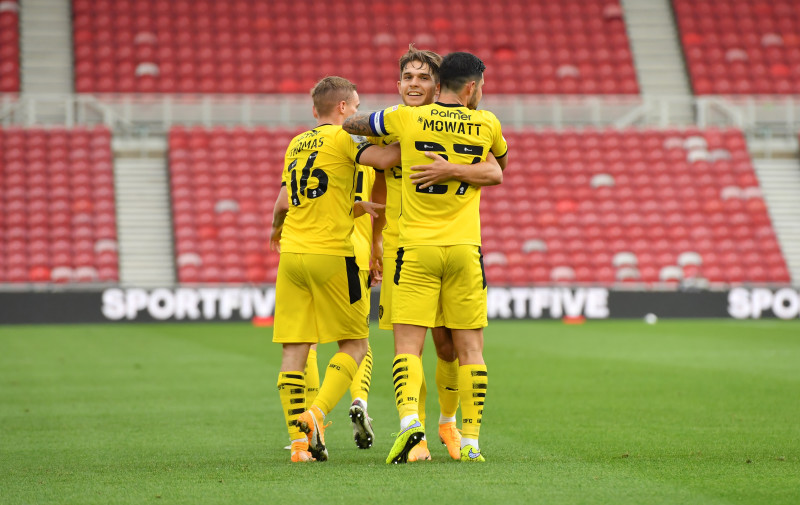 Barnsley won 2-0 at Middlesbrough to set up a trip next week to Premier League giants Chelsea in the third round of the EFL Cup.

Patrick Schmidt and Jordan Williams put the visitors 2-0 up at half-time as they bounced back from the disappointing 1-0 loss at home to Luton Town in their first league game on Saturday.

It is the first time they have reached the third round since they played Tottenham Hotspur at Wembley in 2017 while they have not visited Chelsea's Stamford Bridge since 1998 in the Premier League.

The Reds were on top for the majority of the first half, playing some excellent football, and although they defended a lot in the second half, it was a deserved win over a lacklustre home team.

Brad Collins replaced Jack Walton in goal while Michal Hellik made his debut in place of Callum Styles, with Jordan Williams moving across to left wing-back. Luke Thomas, Dominik Frieser and Patrick Schmidt came in for Elliot Simoes, Cauley Woodrow and Conor Chaplin.

The hosts had the first chance of the game in the third minute when, after Williams half cleared a free-kick, former Barnsley striker Ashley Fletcher shot over the bar from 12 yards. Marcus Browne then headed a Marc Bola cross wide in the fifth minute. Lewis Wing then shot straight at Collins in the ninth minute from the edge of the box after Fletcher brought down a long ball.

Barnsley had their first shot on target in the ninth minute when, after a good run and pass from Kilian Ludewig, Frieser took aim for the bottom right corner from the edge of the box but his effort lacked power and was easily saved.

The visitors netted in the 22nd minute. The ball was fizzed into the feet of Ludewig who touched it off perfectly to Thomas to play in Schmidt in plenty of space on the right of the box and the Austrian found the net from 12 yards out.

It was 2-0 when Thomas turned his man and played an excellent pass down the left of the box for onrushing wing-back Williams who squeezed the ball home at the near post for his first goal since December 2018 when he netted against Manchester City under 23s in the Checkatrade Trophy.

Ludewig – who had an excellent game in almost a free role despite starting at right wing-back – came off at half-time for Styles, with Williams switching from the left to the right.

The hosts had most of the ball in the second half but were almost caught on the break when Schmidt shot from just outside the box, from a Mowatt pass, and saw it beaten away by the goalkeeper.

Collins easily saved from long-range shots by Hayden Coulson and Marcus Tavernier and he tipped over a free-kick by impressive half-time substitute Paddy McNair. Wing also shot wide from the edge of the box. McNair's cross from the right wing hit Browne at the back post and trickled wide.