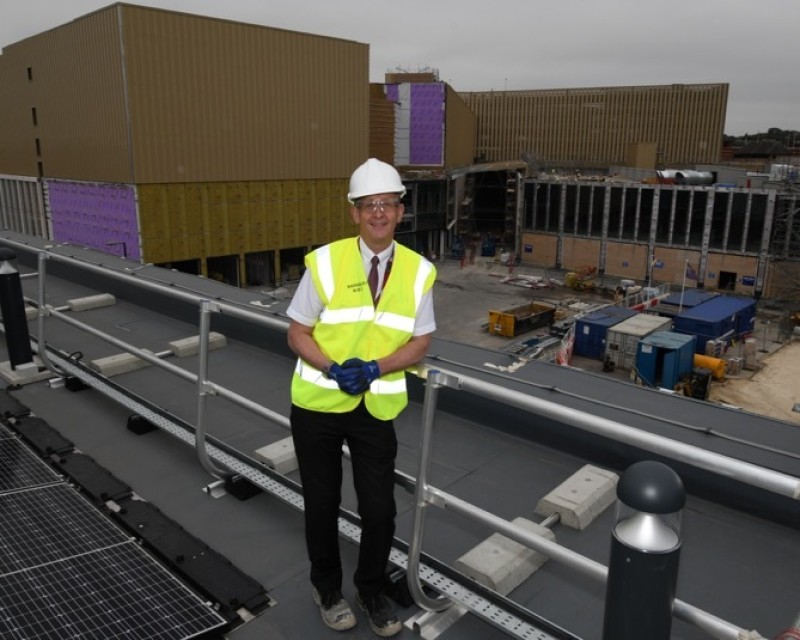 MORE than 95 per cent of Barnsley Council’s multi-million pound Glass Works project team have been revealed as local - with the town centre regeneration team set to open the complex’s doors to the public next September.

There are currently 250 construction workers at the site, with 96 per cent of those being considered local to Barnsley - living within a 25-mile radius of the town - and all are working safely within bubbles to adhere to strict social distancing measures.

The scheme will feature up to 25 new shops, seven new family restaurants, a Superbowl UK which features a bowling alley, as well as a 13-screen Cineworld franchise featuring a large-scale 4DX screen - stacked with moving chairs and steam to offer the full experience.

The centre, which is part of the £200m investment into Barnsley, is set to open to the public in a year’s time and is currently 60 per cent fully let - though the leader of Barnsley Council, Sir Steve Houghton, says there are businesses who are hoping to take a space in the development.

He told the Chronicle: “We’ve got more companies that we’re talking to who want to come and relocate to the scheme so we want the 60 per cent boosting up next year.

“We know that it won’t be 100 per cent because these things never are, but we want to get as close to that as we possibly can do.

“The next project is going to be Eldon Street and what we can do with that but we’re also looking at courthouse, as well as an empty building strategy for the town centre.

A recent report from the Centre for Cities shows Barnsley is in the top ten towns in England for spend following lockdown, with an overall recovery index of 81 - a figure well above other major towns and cities.

“The fact we are a year away from opening - despite challenging economic times - is a testament to the strength of this game-changing scheme that will have a hugely positive impact on our local economy and the lives of people right across Barnsley,” he added.

“There’s a huge amount of confidence in the Glass Works - not least due to the new lettings we have recently secured for the centre, on top of the big names already signed up, and we’re committed to delivering the scheme now more than a year.

“This is not just another shopping centre, it’s something much more ambitious, especially given the mix between leisure and shopping.

“We firmly believe the flexibility of the scheme is what the high street needs, what Barnsley needs and can strengthen the rest of the town centre.”

Originally, the Glass Works was set to open its doors to the public in July 2021, but due to complications regarding coronavirus the project was pushed back although the construction company on site, Henry Boot, only took two weeks off during the virus.

“Everything is back up and running now,” Sir Steve said.

“Henry Boot only had two weeks off during lockdown and they managed to reassemble the workforce and get to work safely.

“The timetable has now shifted a bit because we were talking around July next year an it’s now September, but given everything that’s happened it is a fantastic performance from the company and we can’t wait for it to open.”

Paul Sargent, chief executive of Queensberry - the firm responsible for the site’s running - added: “The investment to deliver the Glass Works has helped to position the town as a perfect example of a thriving regional hub - to be 60 per cent let at this stage in the development cycle, considering the wider economic back drop, is really positive.

“The strength of the occupier interest is down to the fact that the Glass Works is more than just a shopping centre - it offers ease of access, a sense of community, facilities for independent traders alongside established national brands, the historic market, cultural and leisure uses and access to open space.”