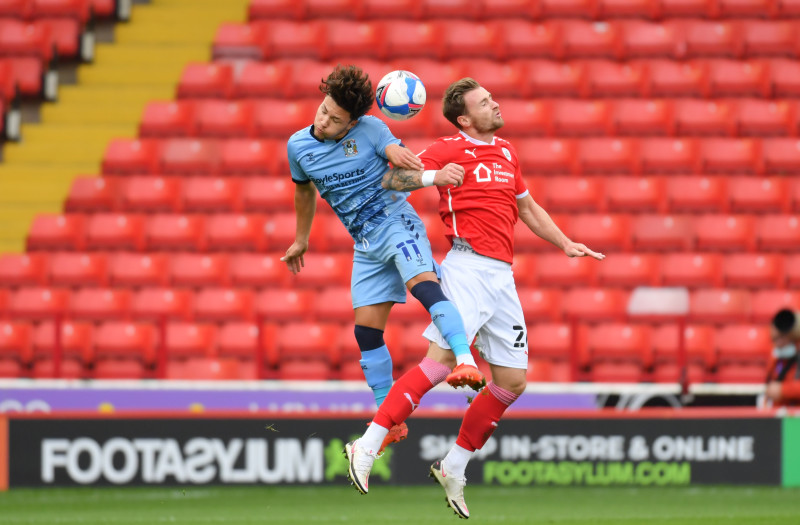 BARNSLEY claimed their first point of the Championship campaign - but have still to score their first league goal.

The Reds had the bulk of the chances in this scoreless skirmish, but couldn't make any of them count in what is becoming a very concerning habit.

The only consolation is that the outcome could have been worse, since the visitors hit the woodwork in the first half.

Barnsley went into the game with head coach Gerhard Struber playing down rumoured interest from American club New York Red Bulls and insisting his focus was firmly on getting the better of former Reds manager Mark Robins and his Coventry side.

The men from the Midlands were chasing a first league win at Oakwell since a 2-0 Championship success in August 2009, six visits ago, although there was a 2-1 FA Cup third-round victory in January 2014.

Barnsley welcomed back centre-backs Michal Helik and Mads Andersen from the suspensions which followed their red cards at Reading a week earlier and forced them to miss the midweek League Cup mauling at Chelsea.

The pair lined up alongside Michael Sollbauer in Struber's favoured three-man defensive line-up, while the boss made two changes from the side which started at Reading, with Callum Styles replacing Marcel Ritzmaier and Cauley Woodrow coming in for Dominik Frieser.

Coventry came into the game having not played since beating QPR 3-2 the night before Barnsley went down 2-0 at Reading.

But it was Barnsley who made the early running, with Jordan Williams driving over from distance before Callum Styles tested Coventry keeper Marko Marosi from 20 yards out after working a one-two with Luke Thomas from a free-kick.

Thomas was then off target with a shot after Williams surged forward down the left.

But Coventry started to find their rhythm, and forged the best chance of the first half when centre-back Leo Ostigard powered a header against the bar from Gustavo Hamer's 16th-minute corner.

The ball fell invitingly to Callum O'Hare, but he blazed his shot over.Ben Sheaf had an effort blocked by Helik, then blazed the rebound too high, while at the other end, Styles shot over from distance shortly before the break.

Struber made a change at the break, bringing on forward Frieser for defender Helik and switching from a 3-4-1-2 to a 4-3-3 formation.

Frieser was soon in the action, heading over from a Conor Chaplin cross, while Woodrow drove too high before captain Alex Mowatt put a shot wide.Barnsley made a second substitution on 59 minutes, Elliot Simoes replacing Thomas.

As the home side continued to push forward, Woodrow had a drive blocked by Kyle McFadzean before Simoes came close with a curling shot from just inside the penalty area which drifted just over.

Woodrow had a great opportunity in the 89th minute, but Marosi smothered his shot.

Then Andersen blocked O'Hare's powerful drive to deny Coventry what would have been an undeserved breakthrough.