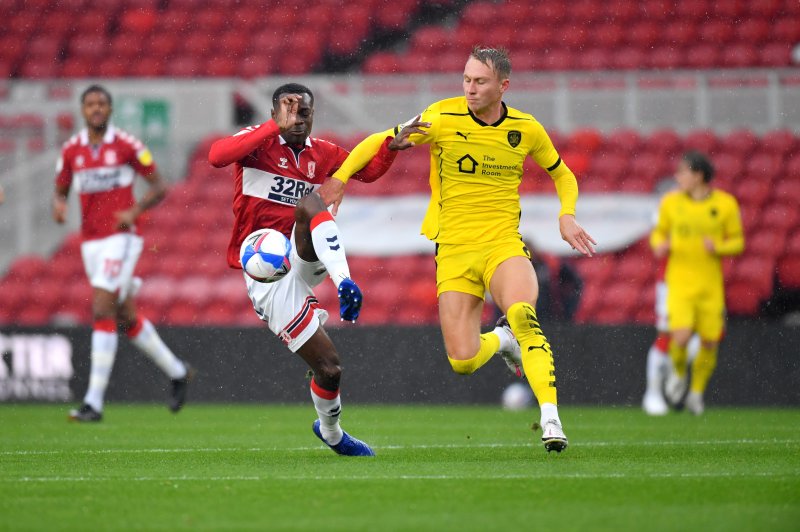 BARNSLEY scored their first league goal of the season, albeit with a penalty, but suffered a third defeat in their opening four Championship games in what might well turn out to be Gerhard Struber's last game as head coach.
Talk over a move to New York Red Bulls for the Austrian dominated the build-up to the fourth match of the Championship campaign, and his players were unable to provide supporters with much to take their minds off the speculation.
It wasn't until the 89th minute that Cauley Woodrow scored from the spot, and by that stage the visitors were trailing to goals by Jonny Howson, in first-half stoppage time ad Chuba Akpom, after 48 minutes.
Barnsley made three changes to the side which drew 0-0 with Coventry seven days previously.
Brad Collins came in for Jack Walton in goal, Marcel Ritzmaier replaced Kilian Ludewig and Dominik Frieser was preferred to Conor Chaplin.
Middlesbrough had Neil Warnock, a former Barnsley player, back in the dug-out for his 1,500th match as a manager in the English Football League following a spell of self-isolation after a positive Covid test.
He too made three changes, centre-back Dael Fry for calf-injury victim Grant Hall, Marc Bola for Djed Spence and former Barnsley loan man Sam Morsy for Marvin Johnson.
Barnsley, playing their usual pressing game, started well and kept the home side contained early on, but had a big let-off in the 14th minute.
Defender Mads Andersen allowed a low ball to slip through and Akpom, who scored on his debut in the 1-1 draw at QPR seven days before, should have done better then poke his shot wide.
Then Collins made a fine to save to thwart George Saville as he met Paddy McNair's free-kick with a diving header.
Woodrow found himself in space on the edge of the Boro penalty area after 24 minutes, but was well off target, before Callum Styles curled a free-kick over.
After Woodrow delivered a cross from wide out, Alex Mowatt played a neat one-two with Jordan Williams, only to fire the ball over the bar.
Collins blocked as Akpom slid in to connect with Bola's cross, and Boro had a goal disallowed, apparently for offside, on 36 minutes, when Morsy's shot took a defection off Akpom and wrongfooted the Reds keeper.
But there was no disputing the home side's breakthrough goal in first-half stoppage time.
Tavernier ratted the bar with a well-struck free-kick, Saville headed the rebound back across the face of goal and Howson drilled it home from the edge of the six-yard box.
Barnsley began the second half with Victor Adeboyejo on for Frieser.
But the visitors found themselves two down within minutes of his introduction as Akpom tucked home the rebound when Collins could only parry Marcus Tavernier's shot.
Barnsley brought on Ludewig for Ritzmaier after 51 minutes, and soon after, won a free-kick 20 yards out, but Adeboyejo thumped it over.
The third substitution, Elliot Simoes for Luke Thomas, came on 67 minutes as the visitors sought a way back into the contest.
Mowatt took aim from a 69th-minute free-kick, but again shot over the bar.
Michal Helik headed narrowly over before Woodrow was felled by Jonny Howson as he broke into the penalty area and got up to put away the spot kick.
Five minutes of stoppage time were added, but Barnsley didn't come close to an equaliser.
Middlesbrough: Bettinelli, Dijksteel, Fry, McNair, Bola, Morsy, Saville, Howson, Tavernier, Akpom (Coulson, 87mins) Assombolonga. Subs not used: Wood, Spence, Johnson, Wing, Browne, Stojanovic.
Barnsley: Collins, Sollbauer, Helik, Andersen, J Williams, Mowatt, Ritzmaier (Ludewig, 51), Styles, Thomas (Simoes, 67), Woodrow, Frieser (Adeboyejo, HT). Subs not used: Oduor, Chaplin, Schmidt, Walton.
Referee: Oliver Langford.