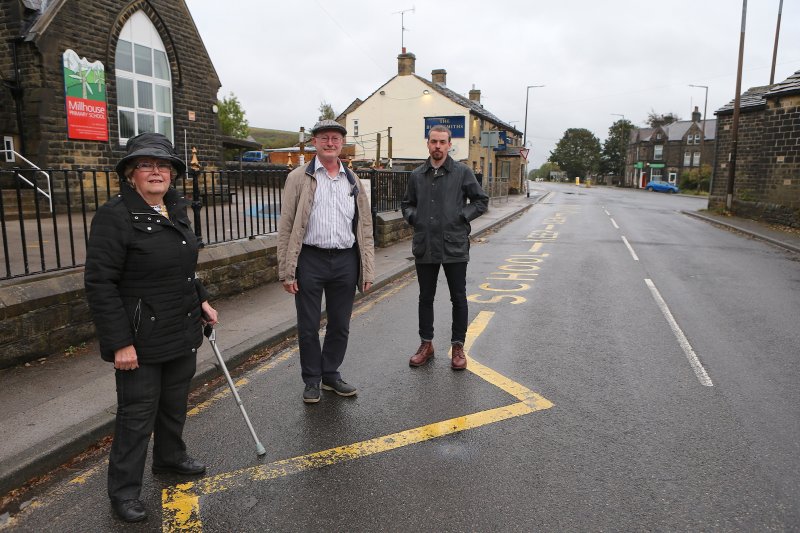 A CAMPAIGN to lower the speed limit past a school where drivers have been recorded at up to 76mph has hit the brakes – because £1.4m is being spent on road safety at the location by Barnsley Council.

Residents near the busy A628 through Millhouse Green are demanding a lower limit than the current 40mph – especially near the village’s primary school.

The school has been flagged up as the only one in the area with a 40mph limit going past it and a campaign – ‘30 For A Reason’ – has been launched in recent weeks with a traffic survey revealing drivers have gone as fast as 76mph along the stretch of road.

The town council has pledged its support for the campaign and at the last meeting received a report from ward councillor John Wilson about the possible use of speed indicator devices to try to curb driver behaviour.

Coun Andrew Millner suggested the council should wait until after £1.4m of planned works along the whole of the A628 have been done.

Pedestrian crossing improvements, the introduction of road safety barriers, better street lighting and traffic calming measures are all part of the work set to be carried out.

“Then we can see just what is implemented,” Coun Millner said.

Coun Michael Barraclough said he had been told by Barnsley Council that the funding does not include any provision for a change in the speed limit.

“Work to bring this into play would have to be paid for from Barnsley Council coffers,” he said. “It is not ideal, but let it take place and then reassess the speed limit once the work has been done.”

Coun Barraclough wanted to see the limit come down to 30mph.

“It as if Barnsley Council won’t listen to our proposals until the money has been spent,” he said.

“Reducing the speed limit is the most effective safety measure. There are trunk roads elsewhere which even have 20mph limits.”

A report into the A628 reveals the stretch was successfully put forward by the local authority for cash from the Safer Roads Fund, which focuses on reducing the risk of potential collisions.

“This length of the A628 was ranked in the ‘high risk’ category of the nation’s roads,” it added. “This was based on reported killed or seriously injured collision records, potential road risk rating and traffic volumes.

“As expected, the collisions are typical for a single carriageway road and include single vehicle loss of control, head-on collisions and misjudged overtaking.

“These were distributed along the route with some small concentrations. The bend at Fulshaw Cross had a cluster of four reported injury collisions in the period. There were also urban types of collisions within the conurbations of Thurlstone and Penistone.