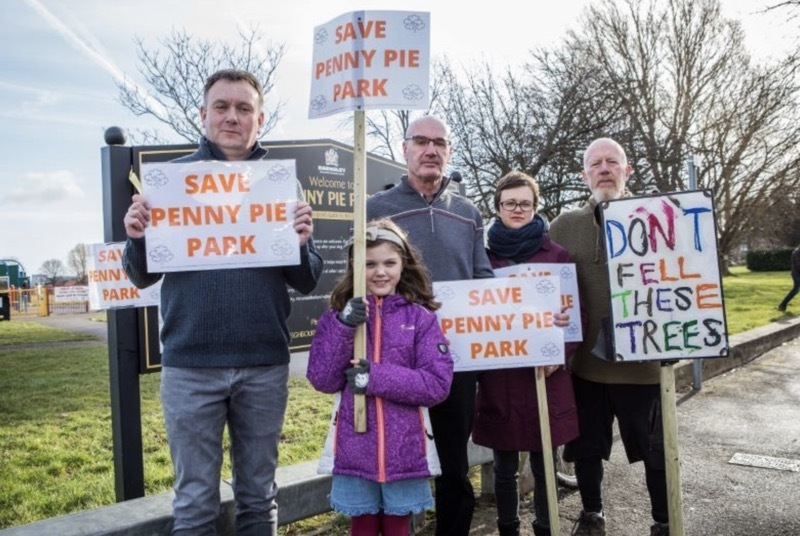 FURIOUS campaigners who have been fighting to save a popular park from ‘destruction’ as a result of plans to build a new one-way road through its land have urged Barnsley Council to axe the scheme - after it was revealed an extra £3m is needed.

Penny Pie Park - which will lose 1.133 hectares of its land in order to make way for the multi-lane system - resulted in more than 2,700 residents signing a petition against the plan when the local authority outlined its intention to reduce traffic into the town centre last year.

Original estimates show £4.3m was set aside for its completion - made up of cash provided by the council and Sheffield City Region’s investment fund - but now a further £3.053m has been approved by cabinet members.

Council leader Sir Steve Houghton told the Chronicle: “The reason for the extra cost is because we’ve listened to the public’s concerns and acted on them.

“We did envisage more expenditure but I appreciate it’s gone from £4.3m to over £7m and that will no doubt concern some campaigners who never wanted the road to be created.”

A cabinet report added there has always been an ‘element of uncertainty’ surrounding costs.

“By its nature a ‘target price’ contract, typically used for engineering works contracts, brings with it an element of uncertainty around costs,” it said.

“This is due to the fact that a mechanism exists within the contract to provide for where a ‘compensation event’ occurs during contract delivery.

“Approval of this funding will increase the total budget required to complete the project from £4.395m to £7.448m.

“To date £2.97m of this budget has either been spent or is fully committed leaving a balance of £1.425m remaining from the original budget allocation.

“The residual balance, however, is insufficient to complete the project due to the cost. Cabinet approval was therefore sought to release capital reserves with a total value of £3.053m.”

The decision to put a new road through the park, at the Dodworth Road crossroads between the town centre and junction 37 of the M1, remains highly controversial.

The council argued there was no other viable option, having considered around three dozen alternatives, and pressed ahead with the plan, eventually winning the ruling cabinet’s backing and then securing planning permission.

A spokesperson from campaign group Save Penny Pie Park said:

“We’ve been completely ignored from the start. Ruling councillors have basically ignored more than 2,700 petitioners, all of whom wanted this damaging scheme to be halted.

“The fact this is now costing almost doubled what was initially envisaged is another kick in the teeth to those people who fought hard to protect a rare belt of green space, loved and used by generations of families, from destruction.

“The figure of £3m is not a simple oversight that can be explained, it’s yet another example of the council’s incompetence and we can only hope this sparks yet more work to end the plan to create the road.”

Coun Peter Fielding, who represents the Dodworth ward, blasted the council’s handling of the saga.

“The council’s expenditure on this has effectively gone up by 150 per cent. We always knew this would be a money pit and that’s clearly the case now,” he added.

“It’s been dishonest and deceitful and it’s as if the council’s hoodwinked people when they should have known all along it required much more cash.

“It’s either incompetence or dishonesty and the cash reserves the council will use could be better utilised elsewhere, especially so in times such as a pandemic.

“The extra £3m was not referred to when this scheme was passed at full council but I won’t be surprised if costs don’t continue to rise.”

“The report also states councillors were consulted with and ‘supported’ this - it could not be further from the truth.”
Author: Josh Timlin