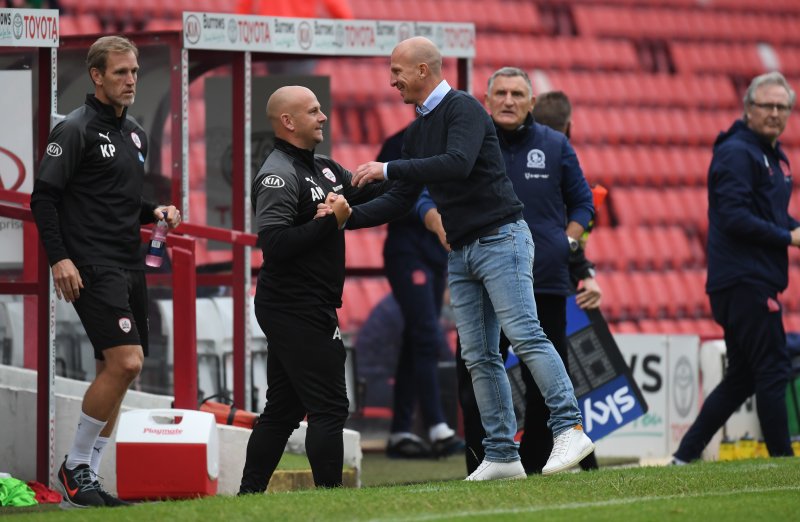 Barnsley’s search for a head coach continues with Adam Murray set to lead them tomorrow against Bristol City.

Gerhard Struber moved to New York Red Bulls last week and was replaced by his former coach Murray on a caretaker basis. Murray is set to be in charge for tomorrow’s home game against Bristol City and potentially the trip to Stoke City on Wednesday but the Reds are keen to make an outside appointment. They are understood to be conducting second interviews and have a preferred candidate.

Barnsley have been interviewing candidates since Tuesday of last week, with the majority understood to have been working in Germany or Austria.

One candidate is Valerien Ismael, the former Crystal Palace centre-back.

He is French but spent most of his career in Germany including spells in charge of Nurnberg and Wolfsburg.

The 45-year-old spent last season at Austrian club LASK Linz, where he worked with new Barnsley striker Dominik Frieser. He was sacked in July.

Others who have been linked to the role include Markus Schopp, the head coach of Austrian top flight club TSV Hartberg, and German Alexander Zorniger but neither are thought to be leading candidates.

Reports in Germany say Hoffenheim coach Marcel Rapp has ruled himself out.

Meanwhile, Murray has been taking training along with Tonda Eckert and Wolfgang Luisser who were brought in in the summer to assist Struber.

Murray told the Chronicle: “Working with Gerhard has been an education.

“I learned a lot off Daniel (Stendel, previous head coach) but Gerhard took that to a new level. From a personal level, I have learned a lot as a coach.

“I have looked at things he did and decided if I liked them or if I would change them a little bit. It’s been great for my journey but it’s not really about me, it’s about the players.

“I was a little bit upset to see him go but I understand he couldn’t turn the opportunity down.

“He had put this team in a very good position and we were ready to push again.

“We just have to carry on the good work of the last 12 months. It was upsetting for all of us but we can’t mope about it because we have a job to do.”

Tomorrow’s game is the first of seven in 22 days and a chance for Barnsley to improve on a start to the season which has so far brought one point and one goal from four Championship matches.

Murray was made manager of League Two Mansfield Town aged 33 in 2014, and lasted two years before resigning and moving to non-league Boston United where he spent ten months.

He joined Barnsley as under 18s coach but was brought onto the first team staff last year by Stendel who he replaced on a caretaker basis after the German’s sacking in October 2019.

His last spell in charge, a year ago, saw the Reds draw 1-1 at home to Swansea then 2-2 at West Brom, having been 2-0 up, before defeats to Huddersfield Town and Stoke City either side of a 2-2 draw at home to tomorrow’s visitors Bristol City.

He said: “I think there are a lot of differences to last time. We are in a much better place as a group of people and a team. Last time there were a lot more fires to put out, this time it is tweaking a few things, scoring a few more goals and keeping the good work Gerhard did going. We are not in the position we want to be in the league but we are positive.

“The biggest challenge has been settling people’s minds because we are a very tight group and we achieved something special last season.

“It took a few days to get our heads around losing the manager but we know that has gone, we’re professionals and we have to get three points.

“We have been focusing on getting our goal-scorers in positions where they can score goals and maybe not having them so much involved in the build-up.

“I am a lot clearer in my own mind this time, about what I want to do as a coach, but I don’t want to confuse the players with too much change for when a new manager comes in.”

Asked if he wants the job full-time, Murray said: “If the club asked me I would have a decision to make but I am more than happy with the role I am in. My focus is on the group of players.

“The club is in a process and my job isn’t to keep asking what is going on, it is to get the players ready to go to war.”