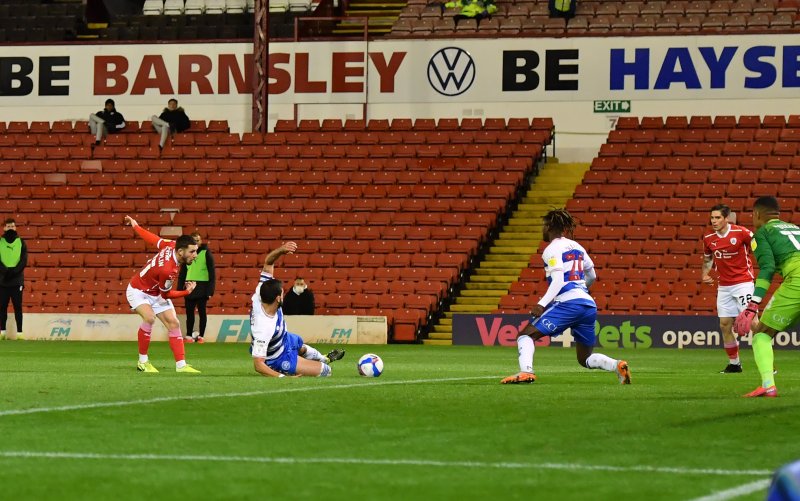 Valerien Ismael enjoyed a fine first game as Barnsley head coach as his side beat ten man  Queens Park Rangers 3-0 at Oakwell on Tuesday night to register their first league win of the season.
Hoops defender Rob Dickie was sent off after 26 minutes for hauling back Cauley Woodrow who was through on goal but got up to smash in the penalty, which was followed ten minutes later by a Conor Chaplin strike. Yoann Barbet scored a baffling own goal midway through the second half.
The hosts could easily have doubled their tally, at least, while the visitors did not have a shot on target until injury-time.
Ismael made two changes from the team that drew at Millwall on Saturday under caretaker Adam Murray. Fit-again Woodrow and Callum Styles came in for Matty James and Elliot Simoes. Romal Palmer and Luke Thomas were not in the squad but George Miller was on the bench.  Barnsley played 3-4-3 with Chaplin on the left on the front three and Dominik Frieser on the right while Woodrow was in the centre.
Very little happened in the first quarter of the match, as QPR started the brighter but the Reds grew into the game with Clarke Oduor having the first shot on target when his 20-yard poor effort skewed up into the air and was caught by the goalkeeper.
The game changed when Styles' pass was not cut out by two defenders on the edge of the box and travelled through to Woodrow who was clean through eight yards out when he was pulled back by Dickie. The referee David Webb sent the defender off and Woodrow blasted in his fourth goal of the season, and third in the league which have all been penalties.
Woodrow forced a save from Senny Dieng with a low shot from just outside the box which the goalkeeper dived to his right to save. Seconds later, it was 2-0 as Frieser received the ball on the left wing and found Chaplin in the box who produced a fine finish into the bottom left corner for his first goal of the season.
Ismael brought Matty James on at half-time for Oduor, with Styles moving to left wing-back. Chaplin should have scored a second on 50 minutes when Alex Mowatt's excellent low cross from the left was met by a diving header but, unmarked five yards out, he nodded into the ground and it looped up for Dieng to catch easily.
At the other end, Dominic Ball headed over a left-wing corner after being left unmarked 12 yards out.
The third goal saw Mowatt's excellent pass release Frieser on the right wing and he impressively picked out Woodrow who took a poor touch which gifted the ball to Barbet but the centre-back inexplicably passed the ball from 12 yards out past his 'keeper into the net.
Mowatt nearly made it 4-0 after a good move saw him shoot from the right of the box but Dieng made an outstanding save to stop the ball flying into the bottom left corner.
Substitute Patrick Schmidt missed a fine chance when he shot straight at Dieng from the left of the box after being played in by Chaplin. Schmidt then headed an Elliot Simoes cross straight at the goalkeeper. Impressive substitute Simoes almost netted after a fine run from near halfway to the edge of the box but his shot was well saved by the legs of the goalkeeper.
Dieng also denied Schmidt with a good block after the Austrian ran onto a fine chipped past by Chaplin who then curled wide from 15 yards on the right of the box after being well found by Styles.
Ball had QPR's first shot on target in injury-time, attempting to lob Walton who easily caught the 30-yard effort.
Barnsley (3-4-3): Walton; Sollbauer, Helik, Andersen; Brittain, Mowatt, Styles, Oduor (James HT); Chaplin, Woodrow (Schmidt 67mins), Frieser (Simoes 75). Unused: Collins, Halme, Schmidt, Miller, Kane. Goals: Woodrow 27 (pen), Chaplin 37, Barbet OG 65.
QPR: Dieng; Kakay, Rickie, Barbet, Hamalainen; Ball, Carroll, Adomah (Kane 54mins), Chair (Masterson 29); Bonne (Willock 63), Dykes. Unused: Kelly, Cameron, Bettache, Kelman.
AS IT HAPPENED