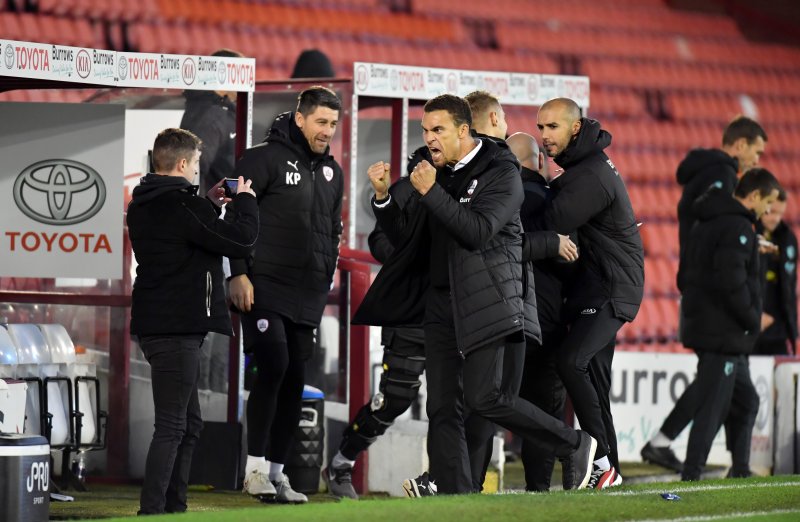 Valerien Ismael was 'very proud' of his side after a 1-0 win over Watford completed a 'perfect week' in his new job as Barnsley head coach.

The Reds defeated one of the promotion favourites in the Championship, following up Tuesday's 3-0 success over Queens Park Rangers in the Frenchman's first match.

Ismael told the Chronicle: "I am very proud of the guys. It was a tough game against a very strong team. The first half was perfect, exactly what we wanted with the pressing and we created a lot of very good situations.

"The second half was a big fight but you need such a game to adapt to the Championship. For the guys, it's a very good feeling today.

"We need every player. George Miller played for the first time and did very well, he fought with the defenders.

"Sometimes we were lucky. Watford got a big, big chance but sometimes you need luck to win."

Barnsley captain Alex Mowatt got the goal with a long-range strike in the fifth minute. Ismael said: "Alex is our captain, he is very important and a big influence on the game with his ability to keep the ball and play like a quarterback. He understands very quickly what we want to see on the pitch. We use his quality to win the ball and shoot from distance, he did that very well today."

Barnsley kept a second straight clean sheet under Ismael, who said: "You need a fight, we defended the box together and did very well. It is important to get this feeling because we have to invest a lot of energy in each game. We don't have the possibilities like Watford – when you see their roster, it is very wide. In every game we invest a lot of energy and today showed when we do that, we can beat anyone. We have to believe in our quality and our philosophy. This win will give us a lot of confidence and belief. It has been a perfect first week but now we have to be focused on the next game."

The downside of the day for Barnsley was a hamstring injury to right wing-back Callum Brittain who came off at half-time. Ismael said: "We lost a player to hamstring injury for the second game in a row. It is a big loss after Cauley Woodrow. We will have to see what the situation is tomorrow but I think it is bad."

Defender Michael Sollbauer added: "If you want to have success against a team like Watford, you have to work together. We worked really hard to get these points. Our skipper scored a really good goal. We also had some chances to score another goal and this is the only point we have to work on. In the end it was a deserved win.

"Our defending started from the front, our defenders put a lot of work in which made it easy for us at the back. We did a good job to defend our box."