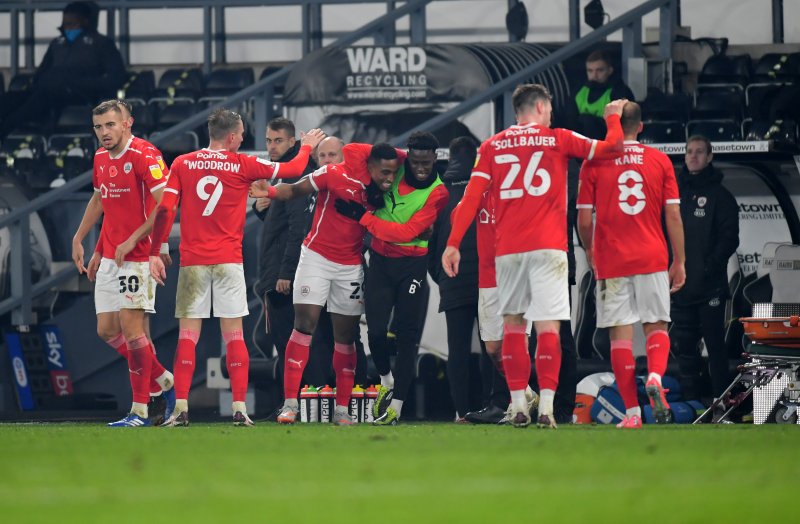 Valerien Ismael says his gameplan of pressing Derby County into mistakes resulted in a 'perfect afternoon' as Barnsley won 2-0 at Pride Park.

The Frenchman now has three wins from his first four matches after Conor Chaplin and Victor Adeboyejo struck.

Ismael said: "It was a big win for us. First of all for the attitude of the team. We wanted to be aggressive with high intensity. I told the guys to force mistakes and punish mistakes. It was the perfect gameplan. I am very happy with the result and performance. It is another clean sheet, a first goal for Victor, our first away win and, I am told, our first win against Derby since 2009. It was a perfect afternoon.

"Derby have very very good players and very big quality. When they are on the bottom, they don't know the situation so you have to fight with the brain and give more. I told the guys that we have a chance to get the points because in two or three months we don't know what is happening with Derby."

Conor Chaplin opened the scoring after goalkeeper David Marshall gave him the ball. Ismael said: "We knew that Derby's confidence was very very down. In such a situation you have to be ready to force the mistakes so it will be difficult for the opponent. We were ready to force this mistake so it was perfect."

Chaplin added: "It is a pleasing goal. It's what we work on in training for pressing triggers, so it will make the lads and staff really happy. We have been talking about how massive it is to score the first goal in this league because it is so hard to get back into games.

"It's a massive win for us. We wanted to react after Tuesday night (a 3-0 loss in Cardiff) and we have reacted in the best possible fashion. With not having a game for two weeks, three points is exactly what you want.

"We didn't start too well, after the first five minutes, we were a bit sloppy and we didn't hold the ball well enough up front.

"But it was a different performance than what people are used to from us. The defensive structure was brilliant and the discipline from all the lads was really good. It was a counter attacking game where we set traps and created chances. We could have had a few more."

Substitute Victor Adeboeyjo doubled the lead late on with his first Championship goal. Ismael said: "I am very happy for this guy. Since my first day I worked with him and I feel very good spirit and positive attitute. He is ready to invest a lot of energy for the team and I think this way to play football could be very good for him. I hope it is a breakthrough for him for this season.

"The strikers did their job, it is why they get the money every month."