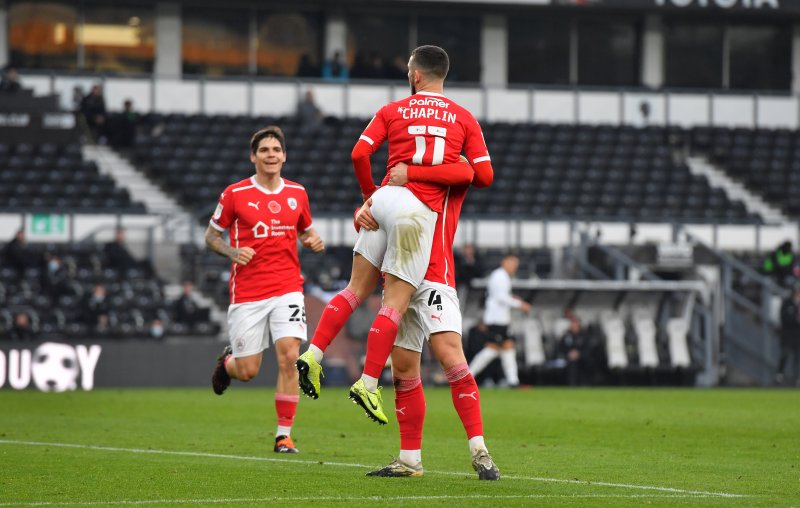 Conor Chaplin insists Barnsley are not thinking about the six-point gap between themselves and the bottom three as they have always expected to spend this season well away from the relegation scrap.

The striker netted his second goal of the season in the 2-0 win at Derby County on Saturday which left the Reds 16th. They have not been in the relegation zone this season, after they scored an injury-time winner to stay up at Brentford in July.

Chaplin told the Chronicle: “I don’t think anyone is thinking about that half of the table this year. We have come on leaps and bounds from last year. It is not even a conversation that happens in our dressing room. It is ‘how high can we finish?’ not looking over our shoulders. We have grown up a tremendous amount as a team and as individuals.

Chaplin is enjoying working with Valerien Ismael who has won three of his four matches as head coach so far.

“The results speak for themselves.

“He has got his message across loud and clear. The lads understand what he wants which is a big thing for players.

Chaplin opened the scoring on Saturday due to an error by goalkeeper David Marshall whose pass was intercepted by the Reds striker.

“It is a pleasing goal. It’s what we work on in training with pressing triggers, so it will make the lads and staff really happy. We have been talking about how massive it is to score the first goal in this league because it is so hard to get back into games.”

The other goal was netted late on by Victor Adeboyejo, from a Chaplin assist.

Adeboyejo had not scored a league goal for the Reds in more than two years and was loaned out last season.

“It was a really good finish and quite a good team move.

“I am delighted for Vic, he’s been patient and he’s a different option that we haven’t got at the club. He’s been working hard on the training pitch which I really like about him. He puts the work in to make sure that, when he gets the opportunity, he’s fresh and fit and he’s confident in front of goal. All the lads are really happy for him.”

Adeboyejo and George Miller have both played under Ismael after barely featuring last season, while Patrick Schmidt has doubled the number of league starts he has made for the Reds under Ismael. Chaplin recognises there may be more strikers getting opportunities than last season when he scored 13 and Cauley Woodrow 15.

“This season is like no other so you will need your squad more than any other season because of the intensity and the relentless schedule.

“We have just come off three weeks of playing twice a week. It’s tough but every club is in the same situation.

“With the international break we have some days off to rest and recuperate.

“It doesn’t get easier when we come back, especially in December.”