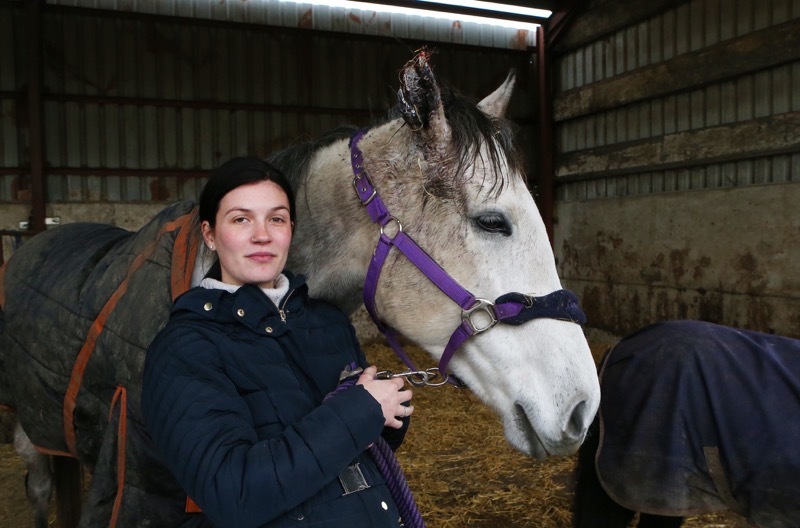 A REWARD of £1,000 is being offered to find the sadistic yobs who lashed a firework to a horse - and then set it off.

Tojo, who was grazing in fields at Medlam’s Farm in Worsbrough on Sunday night, was badly scarred by the firework which exploded on his ear, leaving it split in three places.

Owner Fran Winder, 23, of Kendray called a vet to help treat her horse and was told it was likely that a firework had been tied to his ear - but luckily he had managed to dislodge it before it fully exploded.

Now, Fran is determined to find the people responsible for the attack which has left Tojo in constant pain.

“I’ve had Tojo since August and we have such a good bond. I love him like family so this was extremely upsetting for me.

“I was already worried about the fireworks but he was in a field and not near anybody so thought he would be fine and left him at around 7.30pm on Sunday.

“I received a call in the morning that Tojo’s ear was pouring with blood so raced down to see if he was OK.

“Tojo was really distressed and shaken and I was really worried about him. I couldn’t even look at him without crying.

“I have never felt such rage and devastation. My heart aches for him - I cannot get my head around why anyone would ever want to do something cruel to an animal.”

The attack has left Fran devastated, and she has since offered a financial reward to anybody who has legitimate information about the incident.

“I’m absolutely fuming about this - that’s why I’ve issued a £1,000 reward because the person responsible doesn’t deserve to get away with this,” Fran added.

“I am not the kind of person to ever let it go and get over it, not ever, and I’ll continue to offer this award for anyone who provides legitimate information.

“Fireworks should be restricted full stop. It takes the lives of so many animals across the country and it’s just not worth it.

“It’s incredibly cruel for people to do and it just leaves devastation behind. I’m determined to find the people responsible.”

Fran’s pleas are backed by the RSPCA, a charity campaigning for fireworks to be restricted to November 5, New Year’s Eve, Chinese New Year and Diwali.

Dr Mark Kennedy, from the RSPCA, said: “All too often we hear heartbreaking stories of animals who seriously injure themselves in a blind panic after being spooked by fireworks.

“Perhaps even more shockingly, we seem to be seeing more incidents reported to our inspectors of animals being deliberately targeted and injured using fireworks.

“Enough is enough. We need tighter controls over the sale and use of these potentially lethal explosives.”

A spokesperson for South Yorkshire Police added: “Police received a report that a horse had been found injured in fields off Ardsley Road in Worsbrough on Monday.

“It is reported the horse was discovered with burns to one of its ears by its owner at 10am.

“When she last checked the horse at 7.30pm on Sunday it was unharmed. The burns required treatment from a vet.

“Anyone with any information which could help the investigation is asked to call 101 quoting incident number 861 of November 9.”
Author: Emma Shepherd