Stephen jumped into action to save choking baby Hadley 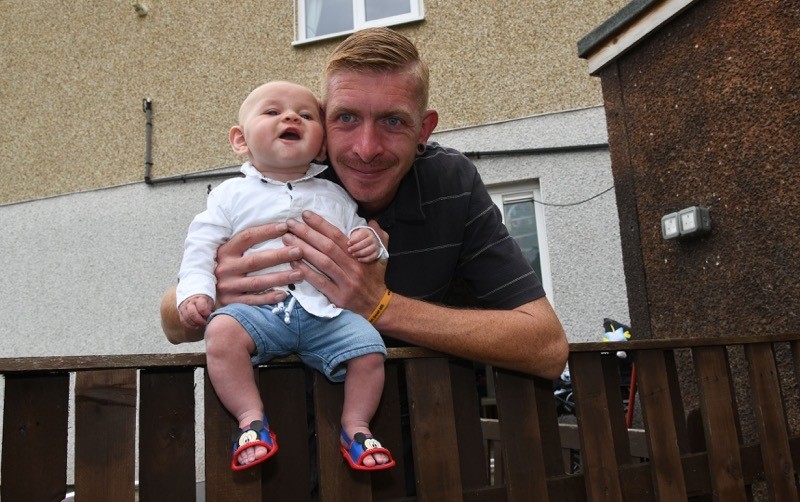 A QUICK-thinking neighbour who jumped over a five-foot fence to save a 14-week-old baby who was choking has been hailed a hero and has made it to the finals of the Proud of Barnsley Awards.

When Hadley Walker started teething, mum Becky, 27, gave him some children’s ibuprofen to help ease his discomfort, but to her shock, the tot began choking on the medicine.

Becky had put it into his mouth using a syringe which came with the medicine, but it left Hadley unable to swallow and he began to choke.

“I was giving him the medicine with the syringe like I have done before and when he got to the last of it he just started choking,” said Becky, of Wombwell.

“I sat him up to try and burp him and then stuck my fingers down his throat to try and make him gag but nothing was working and I started to panic.

“He went grey and lifeless, he was all floppy and I shouted for my mum, Mandy, and she started calling for help.

“I have been taught child first-aid but in that moment I couldn’t remember a thing.

“Hadley was lifeless and almost dead and I was crying because I felt so helpless and in that moment all my thoughts were focussed on him.”

Luckily, Becky’s neighbour Stephen Harrison was unloading his car and heard her desperate calls for help, leaping over the fence to get to the distressed baby.

“He laid him facing down over his knee and patted his back to open his airways.

“If Stephen hadn’t come along when he did Hadley would have died, there is no doubt in my mind about that.

Stephen, a trained first aider, told the Chronicle he was worried he had hurt the tot through his life-saving actions.

“I knew I needed to do something so I just jumped over the fence and grabbed him,” said Stephen.

“There was no point me trying to make him gag so I checked he wasn’t choking on his tongue and laid him over my knee and tried to stop him choking.

“When he came back it was like a weight had been lifted from my shoulders. I never thought I would have to save someone’s life, let alone a baby’s.

“If that had have happened to my children I would have frozen so I don’t know how I did what I did.”

Hadley was checked over at the hospital and given the all clear but Becky is adamant she won’t use syringes to give medication in future.

“The paediatric nurse told me that they don’t recommend the use of syringes because it causes the medicine to come out too quickly, which can cause choking.”

Becky wants other parents to be aware of the risks and be extremely careful using syringes or not use them at all.

“If Stephen hadn’t been there, Hadley would not be here today, and I want other parents to know the dangers of using syringes. Stephen is my hero and he is Hadley’s hero.

“There are no words that can thank him enough for what he has done.”

Stephen is a finalist for the Exceptional Achievement award.