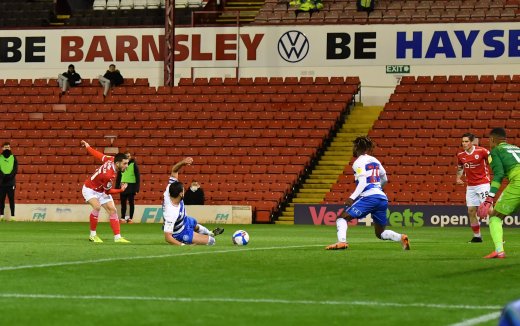 Valerien Ismael enjoyed a fine first game as Barnsley head coach as his side beat ten man  Queens Park Rangers 3-0 at Oakwell on Tuesday night to register their first league win of the season.
Hoops defender Rob Dickie was sent off after 26 minutes for hauling back Cauley Woodrow who was through on goal but got up to smash in the penalty, which was followed ten minutes later by a Conor Chaplin strike. Yoann...

Valerien Ismael was delighted with a 3-0 win over Queens Park Rangers in his first match as Barnsley head coach.


The visitors had a man sent off midway through the second half, with Cauley Woodrow netting the resultant penalty before Conor Chaplin made it 2-0 at half-time then Yoann Barbet added a bizarre own goal.


Ismael told the Chronicle: "The first ten minutes were very difficult, QPR played very strong, but then we came back...

Valerien Ismael is hoping to instil more of a winning mentality in Barnsley after arriving at Oakwell as head coach this week.The 45-year-old Frenchman has been appointed by the Reds, after previously working in Germany, Greece and Austria.He said: "I am very happy to be here and thankful to the fans for the welcome over social media. It was a great feeling for me, my first impression from the club is very good and positive....

Adam Murray was pleased with 'a real good away performance' in Barnsley's 1-1 draw at Millwall on Saturday – his last as caretaker manager.


There were two goals just before half-time as the Reds took the lead through a stunning Alex Mowatt strike but the hosts levelled immediately and forced goalkeeper Jack Walton into several superb saves.


Murray said: "It was a real good away performance. You know when you come to a team that...

Barnsley drew 1-1 at Millwall in the final game before Valerien Ismael takes over as head coach.
Alex Mowatt's sensational long-range goal put the visitors in front after a very dull first 44 minutes but there was still time for the hosts to level in first half injury-time. The visitors were well on top in the second half but goalkeeper Jack Walton produced an outstanding performance with three point blank saves.
The Reds have now... 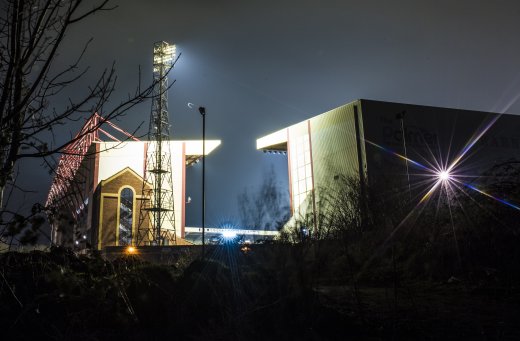 
The Frenchman has agreed a three-year contract and is due to watch the Reds' match at Millwall tomorrow, in which Adam Murray will be caretaker, before taking his first training session on Monday ahead of Tuesday's home game with Queens Park Rangers.


Ismael, 45, played as a centre-back for French clubs Strasbourg and Lens then Premier League club Crystal Palace in 1998 before finishing...

Barnsley could have another professional sports club within the next decade after a former professional basketball player launched an ambitious project to reach the top level in the country.

Barnsley Metros have been set up this year and are due to run junior teams as well as a senior side that is set to enter the Division Three of the National Basketball League, with the aim of progressing to the British Basketball League which...

Cauley Woodrow is glad the ‘distraction’ of speculation about his future during the transfer window is over and he can focus on scoring goals for Barnsley.

The Reds’ top-scorer was a target for other clubs last week but the club’s valuation was not met and he extended his contact for a year until 2023 on deadline day.

Woodrow told the Chronicle: “It’s good to get away from any distractions and know my future...

October has brought Elliot Simoes’ international debut and his first goal of the season but he is now focused on helping Barnsley to their first league win of the campaign.

The 21-year-old came off the bench for Angola during the international break and set up a goal in the 3-0 win over Mozambique. He told the Chronicle: “It was a good experience and it felt good to make my international debut. I have double...

Herbie Kane netted his first ever league goal at Oakwell and is now hoping for more success there.

The 21-year-old joined Barnsley from Liverpool on deadline day on a four-year deal for a reported fee of £1.25million then came off the bench in the 2-2 draw the following day against his hometown club Bristol City and also at Stoke in midweek. He played two EFL Cup games for the Premier League champions and was... 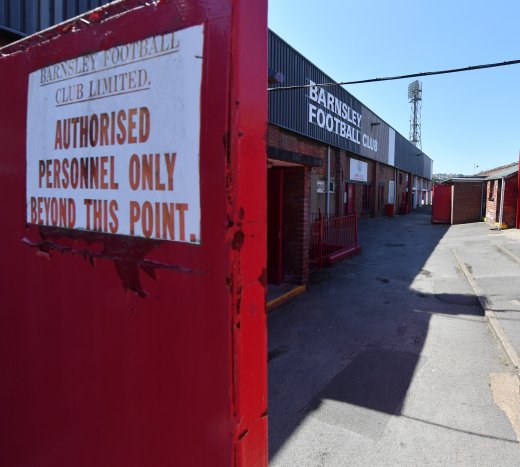 Barnsley have begun negotiations with ‘a group’ of English-based strikers who do not have clubs, but they are not close to signing anyone.

The Reds brought in midfielders Herbie Kane and Matty James on deadline day last Friday while they kept hold of star striker Cauley Woodrow who signed a new contract.

But, having missed out on a targetman striker, they are hoping to recruit a free agent in that position.

Barnsley are expected to have a new head coach by the end of next week with current caretaker Adam Murray one of the main candidates along with Frenchman Valerien Ismael.

The Reds have selected a final three, with the other candidate thought to be another overseas coach.

They were likely to move a step closer to the final appointment at a board meeting last night although a first victory of the season at Millwall...


We’re in a decent position at Barnsley.


We are not one of the clubs who are fearing for their future. I don’t want to point the finger and say: ‘give us money.’


But we feel that, for the sustainability of the...

Adam Murray and Valerien Ismael are two of three final candidates for the Barnsley head coach role, with a decision likely to be made within the next week.


Murray – the caretaker since Gerhard Struber moved to New York Red Bulls this month – took charge of the 2-2 draws with Bristol City on Saturday then toke City on Wednesday.


He is expected to be in charge for their trip to Millwall tomorrow then they...

Barnsley are frustrated to only have collected a point from a Wednesday evening trip to Stoke City in which they led twice and played against ten men for the final half an hour.


It was a second 2-2 draw for caretaker Adam Murray after replacing Gerhard Struber, while the Reds are still waiting for a first league win after six attempts.


Murray told the Chronicle: "Overall the performance was very good. We were in control... 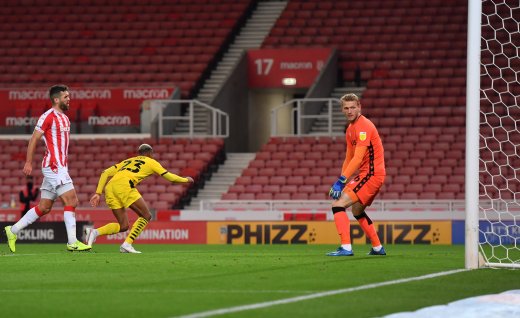 Barnsley lost the lead twice in a 2-2 draw with ten man Stoke City on Wednesday night.
Elliot Simoes put the Reds in front then, although the hosts levelled on 44 minutes, Dominik Frieser got his first goal for the club on the stroke of half-time. Stoke levelled early in the second half due to a Jack Walton error but had defender Nathan Collins sent off on the hour-mark.
The Reds are yet to win in...

Barnsley are hoping to use the free agent market to recruit a new striker.


The Reds did not bring in a forward in the final weeks of the transfer window, despite efforts to recruit a tall targetman.


They can still sign players who are not attached to clubs. Caretaker Adam Murray said: "We are speaking to a couple of free agents at centre-forward.  If we feel the right one is out there will look into...

Michael Sollbauer is 'still groggy' and will be assessed before Barnsley visit Stoke City tomorrow from 7.45pm.


Centre-back Sollbauer suffered a neck injury and blow to the head while winning a late penalty which was scored in the Reds' 2-2 draw at home to Bristol City on Saturday.


Caretaker Adam Murray said: "He's a lot better. He still feels a little bit groggy. We will have to make a late decision on him. We're not...

Michael Sollbauer is not seriously injured following the aerial foul which saw him stretchered off and a late penalty scored by Barnsley in a 2-2 draw with Bristol City at Oakwell on Saturday.


Michal Helik put the Reds in front after 65 seconds then the visitors scored twice in the first six minutes of the second half, before Callum O'Dowda clattered Sollbauer in the box and Cauley Woodrow slotted in the penalty after 102 minutes. ...

Cauley Woodrow scored a 102nd-minute penalty as Barnsley drew 2-2 at home to Championship leaders in their first game of the post Gerhard Struber era.
Woodrow fired in with the final kick of the game after Michael Sollbauer had to receive treatment on the pitch for about seven minutes before being stretchered off. He had been fouled in the air just inside the box by Callum O'Dowda.
Michal Helik headed the hosts in front after... 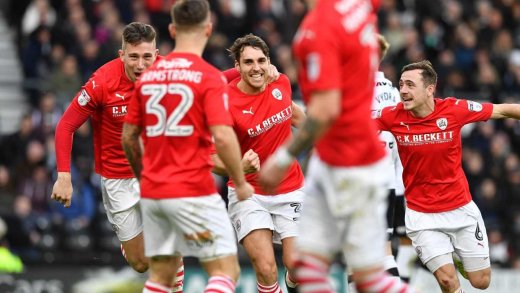 Matty James has returned to Oakwell on loan from Leicester City until January.

Central midfielder James, 29, played 18 games on loan to the Reds in the first half of 2017. He has since struggled with injuries and has only played five minutes of league football since early 2018.

The deal went through near the end of the transfer window. James will add experience to the squad and is a defensive midfielder which...

Cauley Woodrow has extended his contract with Barnsley, putting an end to speculation of a deadline day move.


The Reds' top-scorer was the subject of interest from other Championship clubs including Cardiff City but no bids have matched Barnsley's valuation.


He has signed a one-year extension until 2023.


Woodrow has 36 goals in 84 games for Barnsley since arriving from Fulham in 2018. He netted 14 in the Championship last season and is the only...

Herbie Kane has joined Barnsley on a four-year deal.


The 21-year-old midfielder arrives from Liverpool for an undisclosed fee. He could make his debut against his hometown club Bristol City tomorrow.


He made two League Cup appearances for the Premier League champions and also went out on loan to Doncaster Rovers in 2018/19 – when he scored at Oakwell in a League One draw – and Hull City in the Championship last season.

Josh Wale admits not being able to fight heading into the final years of his career is a ‘nightmare’ situation but believes he still has some big nights ahead of him.


The 32-year-old former British champion from Brampton was hoping to fight in a world title eliminator this year but has been restricted to just training during the coronavirus crisis.


Some televised boxing shows have taken place over the last several months behind-closed-doors but Wale’s...

Barry Murphy played a record 569 Barnsley games from 1962-78 then was a coach in the famous Allan Clarke era and is now club ambassador and matchday host. In his new autobiography, he discusses his life and career with his beloved Reds. Here are some exclusive extracts


WHEN I HAD arrived at Barnsley, we were getting crowds of less than 3,000, which was smaller than at South Shields, and...