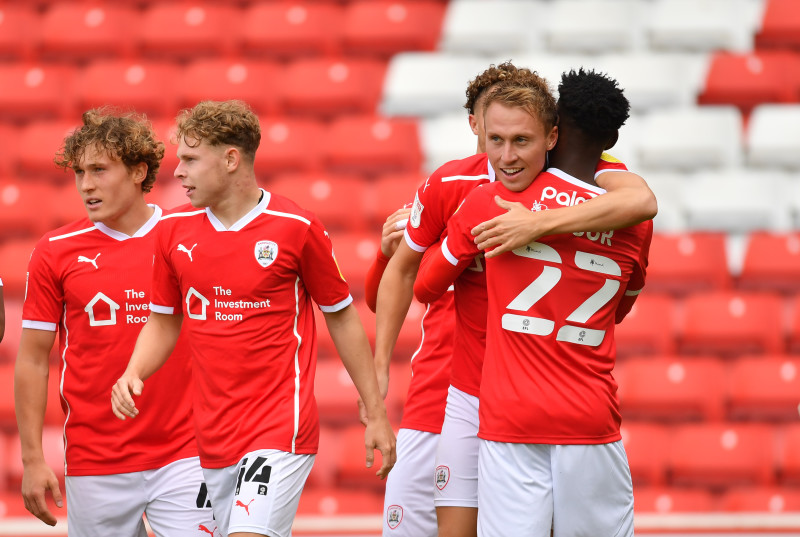 Gerhard Struber said his Barnsley team made a good 'first step' in their 1-0 EFL Cup win over Nottingham Forest at Oakwell on Saturday.

The Reds reached the second round thanks to Cauley Woodrow's strike early in the second half, in their first game of the 2020/21 season.

Struber told the Chronicle: "The performance was OK. We must improve many things but it was a good first step in the right direction. I did not see any chances for Forest. This is very good for us. The team did very well against the ball with good structure. We created chances for more goals but, in the end, it is a deserved win and a good feeling Cauley Woodrow."

Victor Adeboyejo was a surprise starter up front instead of Jacob Brown who was an unused substitute. Struber, who said he would use the game as a 'big friendly', said: "It was the last chance for me to see Victor play. I have not had much time to see him. The game today was a good situation for me and for him. With his performance against the ball with his power and his first sprint, he showed me a good picture. But he must learn with his positioning and he must improve many things. He is only in our squad for three or four weeks. We will see what is best for him and for the club in the future."

Dominik Frieser made his debut as a second half substitute for Chaplin and forced the goalkeeper into a save. The Austrian striker told the Chronicle: "I liked it, I enjoyed playing in the stadium for the first time and I am very happy about the win. We were the better team from the first minute. We could have scored more goals and I could have scored a goal. But we won which is most important. It was not easy for me to come into the game. The other team plays only long balls and I had to run a lot."

Struber has played down the importance of the cup but Barnsley are now in the second round draw. He said: "The biggest focus is on the Championship. We have to be professional in these cup games and not more. Today was a good situation to see the boys in a cup game. I am happy with the performance and the result."

Striker Conor Chaplin is more positive about the cup. He said: "We all want to do well in the league but cup runs, as long as they don't hinder your league form, are the sort of memories you look back on. We could draw big Premier League club. Obviously it's a shame without the fans at the moment, but it's still good for the players to play in those big games. The most important thing is to get a winning mentality and to want to win every game in any competition. We were even disappointed we lost the friendly at Newcastle last week.

"The Forest game was similar to what most people expected, we have't had many match minutes in pre-season but the tempo was better than I thought it would be. The most important thing was to get the win."