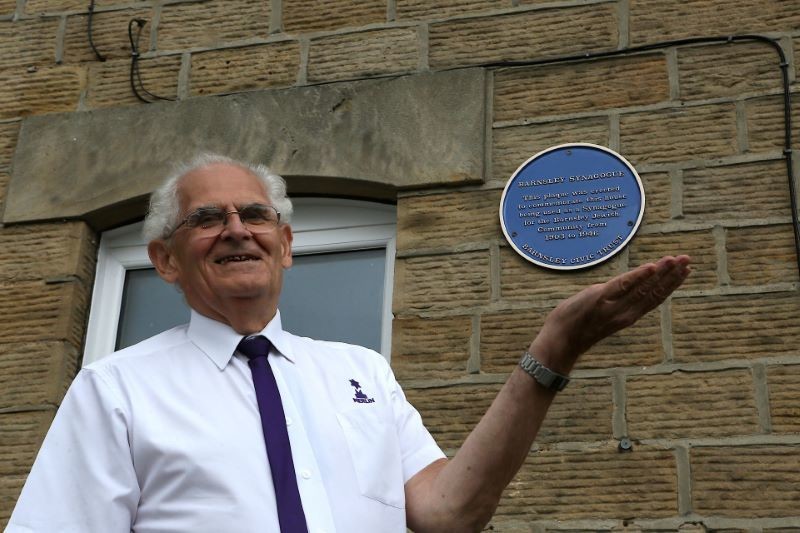 A BLUE plaque has been erected to mark the place where there was a Jewish synagogue in Barnsley.

The synagogue a Jewish place of worship was in a house on Castlereagh Street, Barnsley and was in use from 1903 to 1946.

The plaque reads: “This plaque was erected to commemorate this house being used as a Synagogue for the Barnsley Jewish Community from 1903 to 1946.’

It is thought the synagogue was a house, most likely lived in by a Jewish family, who used it for prayer meetings.

To be a synagogue, 10 people had to meet there. It is not known why it stopped being used. The house is now a house of multiple occupation.

The plaque was the result of lengthy efforts by Richard Dante, whose family had a tailoring business in Barnsley between 1949 and 1983. It was organised by the Barnsley Civic Trust.

Richard, 68, of Leeds, researched the Jewish community of Barnsley on the internet and discovered the address of the synagogue in Castlereagh Street. On a visit to the site, he was surprised to see the building was still standing and thought it should be a recognised for posterity with a blue plaque.

A ceremony was held to mark the erection of the plaque, with people attending from Leeds, Bradford and Harrogate.

At the unveiling, Owen Gleadall, chairman of Barnsley Civic Trust said the small Jewish community met in the house and came together for prayers. He said the blue plaque would help to create a link with Barnsley’s past which was and remains, a rich and diverse community. He said: “The Civic Trust is pleased to honour the building and to recognise this important feature in Barnsley’s history.”

Rabbi Y Golomb of Sheffield Hebrew Congregation said that in Judaism, a place of divine worship retains its sanctity even after it has been decommissioned, and that Barnsley was ennobled by honouring the sacred site.

The plaque was unveiled by the Mayor, Coun Steve Green.