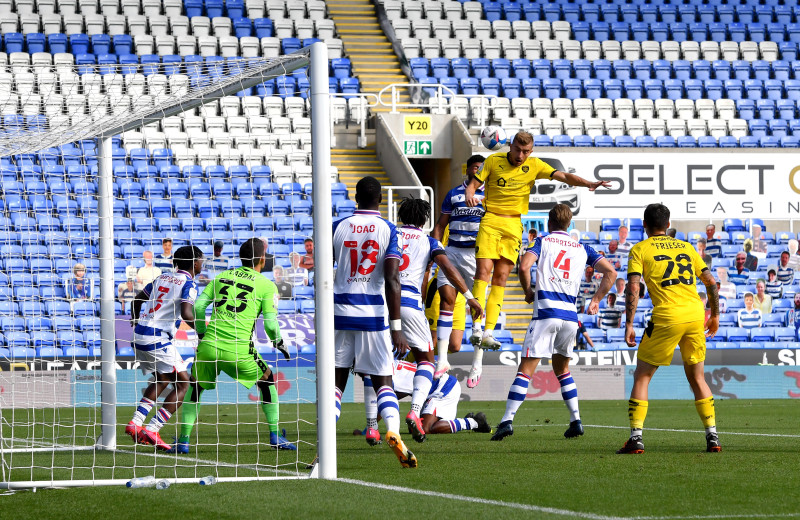 Barnsley had two men sent off in a 2-0 loss at Reading on Saturday afternoon.

The Reds were easily the better side in the first half but had defender Michal Helik dismissed by referee Tim Robinson on his league debut three minutes before the break.

The hosts took the lead midway through the second half then Mads Andersen received a second yellow card seconds later and Reading cantered to victory. The Reds have now lost both their league games this season without scoring.

Gerhard Struber made three changes to the side that lost the first league game of the season a week earlier at home to Luton Town. Helik made his Championship debut while striker Dominik Frieser was given his first league start for the club and Luke Thomas also came into the side, after all three impressed in the midweek cup win at Middlesbrough.

Dropping out of the team were the injured Elliot Simoes, last season's top-scorer Cauley Woodrow and Callum Styles. Thomas played in attacking midfield behind Conor Chaplin and Frieser while Marcel Ritzmaier partnered Alex Mowatt in the centre.

The visitors were the better side in the first half and almost took the lead but Frieser's header from a left-wing Ritzmaier cross was brilliantly clawed out by goalkeeper Rafael. Thomas then fired wide from 20 yards after Frieser touched a Jordan Williams cross to him.

The impressive Ritzmaier also saw two left-wing corners met by centre-backs at the back post but neither Michael Sollbauer or Mads Andersen could put their headers from tight angles on target.

In the 42nd minute, Barnsley worked the ball excellently on the left and – after a Williams cross was punched clear by the goalkeeper – Ludewig hesitated 15 yards out and saw his shot blocked. Reading then blasted a long ball down the pitch and Helik was judged by the referee to have pulled back Lucas Joao, which earned him a red card. There appeared to be minimal contact and the former Sheffield Wednesday striker threw himself to the ground.

Thomas was taken off at half-time to be replaced by Callum Styles, with the Reds using a 4-3-2 formation, then Patrick Schmidt replaced the impressive Frieser.

The hosts had more of the ball with their numerical advantage in the second half and got forward more then had their first shot in the 66th minute when substitute Yakou Meite headed John Swift's cross by Walton pushed it wide of the bottom right corner. The following corner was met by Meite and, after Liam Moore's effort was blocked, he headed in from close range.

The second red card came about a minute after the opening goal as Andersen handled the ball and was shown a second yellow card. The referee judged that he had stopped a pass to set up an attacking opportunity for the Reds.

The second goal came on 76 minutes when Michael Olise sent a sensational 30-yard volley into the bottom right corner after Ludewig only half-cleared a corner.

Substitute George Puscas forced another save out of Walton who pushed away a shot from the right of the penalty area. Alex Mowatt almost pulled one back but his header from a Ritmzaier corner was straight at Rafael. Walton did well to push wide a 20-yard Ejaria strike in injury-time.