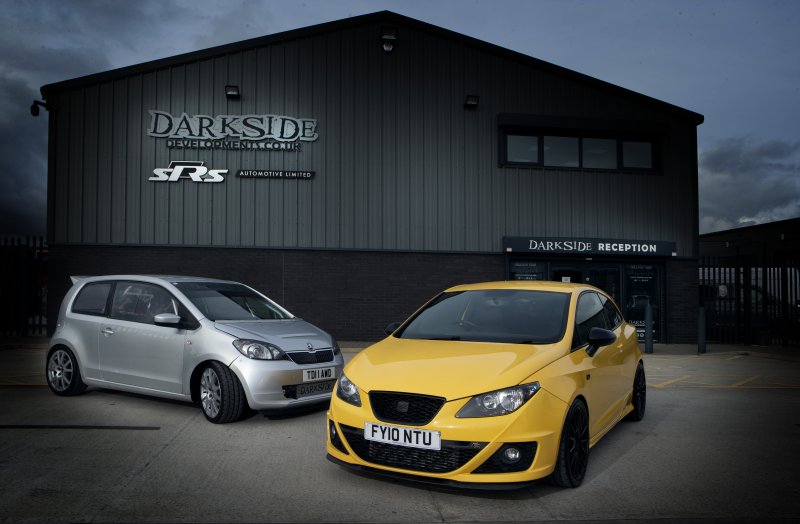 As someone who’s always been an OEM-plus kind of bloke when it comes to cars, you’d perhaps think an assignment to drive two heavily modified superminis would fail to ignite my excitement.

My car modifying history is as follows: Supersprint, Milltek and KTEC exhausts on my S2 106 Rallye, Clio Trophy and Megane R26 respectively, and a nice remap on the latter to unlock a bit more power. That’s it.

When I look back at those, each was a tasteful-but-welcome addition, maintaining the cars’ standard looks, steering away from the Max Power crowd congregating in Cortonwood’s car park where youngsters in Corsas flock to in order to show off their horrific wind deflectors and 22-inch Halfords alloys.

However, the ‘true’ car modifying scene is booming and there are some absolute geniuses working in places such as Barnsley’s very own Darkside Developments, which has a cracking facility in Grimethorpe.

They’re giving away two of their test mules - firstly a Seat Ibiza FR which has a handy 294bhp and the star of the show, a ludicrous Skoda Citigo, but more about that later…

First up, the Ibiza, which in its mark four guise is still the best-looking version. Although the regular FR was trumped by its more powerful Cupra stablemate, the bragging rights definitely go to this yellow one. It has a reworked 2.0-litre diesel engine so while that 294bhp headline figure is impressive, it’s the torque that really stands out.

Inside, it’s standard fare: leather seats, an FR-badged steering wheel and a manual gearbox. Start it up and it’s clear from the off that this is no normal FR: it’s loud, it shakes and you almost feel like its horses are eager to get out onto the road. For such a small car with a large amount of power, it’s by no means a pig to get going and the sweet-shifting manual makes things a delight.

Allow it to warm up and the pull it conjures is eye-opening; third and fourth gears are utterly addictive and unlike most out-of-the-box diesels where they’re out of puff within the blink of an eye, the Ibiza’s engine is mapped beautifully so you get the full-blooded dose of horsepower, but followed by a kick of torque that makes holding onto the gear so much more enjoyable.

Heading back to Darkside’s HQ, I was extremely impressed by my first taste of their work, because the FR has the hard-to-achieve balance of having way more power than standard but actually maintaining its OEM look to others.

Walk over to the Citigo - which shares its platform with the VW Up and Seat Mii - and you drink in the details. It’s a bit of a Frankenstein, this one, as aside from its actual shape it’s so far removed from the humble car it’s based on.

The intercooler, the obviously larger-than-usual brakes, the side-exit exhaust and the polycarbonate side windows all vie for one’s attention, but open the driver’s door and you resemble a kid on Christmas morning. There’s a pair of hip-hugging bucket seats, a full roll cage, an alcantara steering wheel, a rally-style handbrake and a flocked dash. It’s bare, it’s compromised and it’s so silly it’s cool.

Pop the bonnet and you’ll find out it’s not the Citigo’s original engine and it is in fact the same 2.0-litre block as was in the FR, albeit this time with 360bhp and way, way, way less weight to pull. Climb through the postbox-like entry by hoisting your leg over the roll cage, strap your harness and you’ll just grin as you lap up what you’re going to drive.

It’s noisy, you feel miles away from the front - a strange experience given you’re usually a few inches away in, say, an Up GTI - and you’re oh so low. The clutch is heavy, the manual gearbox requires warmth and you feel like a fighter pilot taking a daft machine down to the shops. The steering feels great, but it does not like scarred road surfaces given its track-biased set-up.

Find a decent straight, bury your right foot in third gear and you’ll be frankly alarmed at the rate in which it piles on numbers. On a damp, cold Friday morning, I had expected it to be scrabbling for traction, before I remembered the engineering wizards at Darkside transplanted a four-wheel-drive system into the little Citigo, so getting its power down is never really an issue.

It handles, too. The manual gearbox truly stands out as its action is nigh-on perfect, but it turns sweetly and retains its supermini-style tenacity in the corners. Feel through the wheel is exceptional, too, but when you’re fully committed through the gears it is a laugh-out-loud experience as it’s so damn noisy.

People look, they’re intrigued, they ask questions. It’s an incredible little thing, a proper sense of occasion, and this - or the FR - could be yours for the small price of a £15 raffle ticket.

Winners will be drawn on Halloween on October 31. Enter, I cannot say it enough… Visit darksidedevelopments.co.uk for more information.