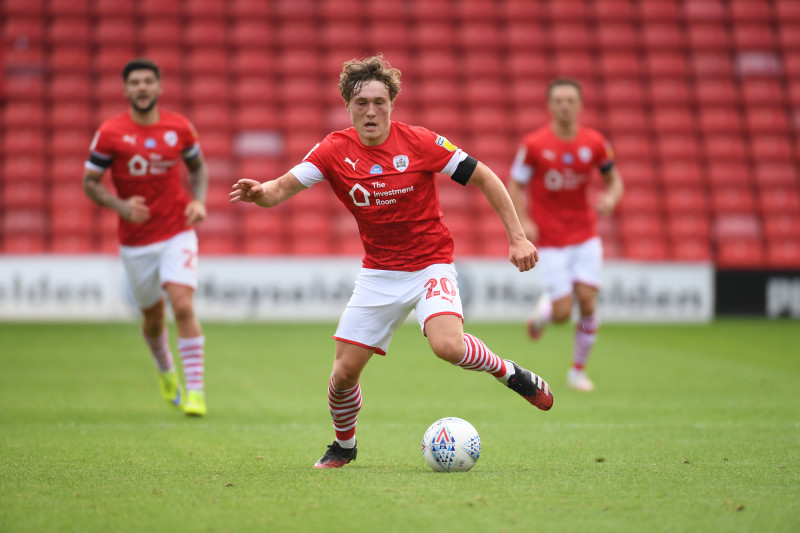 Barnsley drew 0-0 at home to ten man Wigan Athletic in a basement battle in the Championship on Saturday.

Wigan’s Danny Fox was sent off midway through the second half but the Reds, although they had the better chances throughout, could not find the net.

Barnsley are two points off safety, if you adjust the table for Wigan’s 12-point deduction for going into administration, with three games remaining against top five sides Leeds United, Nottingham Forest and Brentford.

Head coach Gerhard Struber made two changes from the side that drew 1-1 at Luton Town on Tuesday as Callum Styles and Elliot Simoes started in place of Conor Chaplin and Mike Bahre. Styles played at left wing-back with Marcel Ritzmaier moving into central midfield in a 3-4-1-2.

The home side started the brighter of the two, attacking with energy and fluidity, especially through Styles on the left, and pressing their visitors into mistakes.

Barnsley almost took the lead in the second minute when Simoes played in Kilian Ludewig on the right of the box but his low shot from a tight angle went narrowly wide of the bottom left corner. Cauley Woodrow then exchanged passes with Alex Mowatt before beating a man and shooting but his 25-yard effort went straight at David Marshall.

The visiting goalkeeper was more tested in the 14th minute when he had to dive to his left to impressively tip away a low shot by Jacob Brown after a scramble on the edge of the box.

Kieffer Moore, the former Barnsley striker, won a header from a corner but it looked to be going wide when Jack Walton gathered it at the second attempt. Marshall saved again from a long-range strike, this time by Ritzmaier just before the break.

Styles, who had been one of the best players on the pitch in the first half, almost cost his team in injury-time as he lost the ball in his half then Michael Sollbauer had to make a superb block in his box to deny Kieran Dowell.

Wigan were slightly on top at the start of the second half but should have gone behind on 62 minutes when, after a corner was cleared but hooked back in by Styles, Sollbauer was through on goal and not offside but he barely connected six yards out and the volleyed effort trickled agonisingly wide.

Fox was sent off in the 71st minute for a high challenge on Simoes. Substitute Joe Gelhardt was then booked a challenge on Styles which Barnsley again thought should have warranted a red.

The ten men almost took the lead in the 80th minute when a cross from the left was met by Kal Naismith but his low 12-yard effort – Wigan’s first shot on target – was blocked on the line by Jordan Williams. Naismith then blocked a shot in the other box after Simoes brought down a deflected Styles cross and shot from 15 yards.

Struber brought on Aapo Halme, the goal-scorer at Luton on Tuesday, to play up front with fellow substitutes Conor Chaplin and Patrick Schmidt. Styles almost won it in the 93rd minute when played in on the left of the box by Chaplin but his shot from a tight angle was well-saved by Marshall, who also easily caught a header from Halme from the resulting corner.