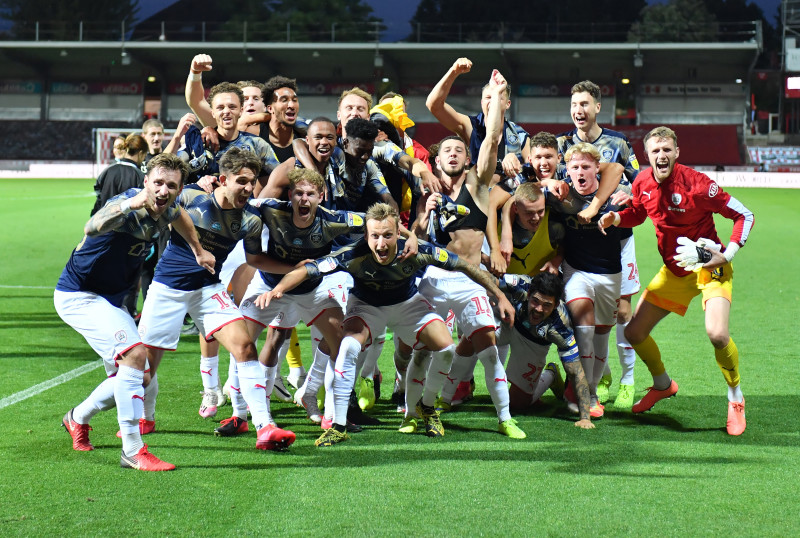 For 311 days, Barnsley were in the relegation zone then, with seconds remaining in the season, they were safe.

The Reds spent more than ten months in the bottom three – far longer than a normal season – after the 2-0 home loss to Leeds United on September 15, during which time they played 38 games. To wake up every day for nearly a year knowing you are in the drop zone must be mentally draining but the Reds’ players and staff have shown tremendous strength, character and no little skill to stay in the fight until Clarke Oduor’s dramatic late winner.

It is an extraordinary achievement which, whatever the players go on to do, will always be remembered by them as well as the fans. They have been helped by Wigan’s 12-point deduction but mostly they helped themselves, winning five matches of the nine after the re-start including the final two in a season for the first time since 1989.

Just as they were staring into the abyss of League One, the Leasing.com Trophy, the FA Cup first round and no international breaks, they produced a remarkable recovery. Here are some of the key factors:

On July 27, 2019,  a year ago on Monday, Daniel Stendel was complaining, not for the first time, about the lack of experience in his new-look Barnsley side after a harrowing friendly loss to Sheffield United at Oakwell.

On the same day – more than 1,000 miles away in Modling, Austria – Gerhard Struber was taking charge of Wolfsberger for the first time. Struber’s team, featuring Michael Sollbauer and Marcel Ritzmaier, won 3-0 against an Admira Wacker side who had Patrick Schmidt up front. Schmidt, Struber, Ritzmaier and Sollbauer would all make the move to Barnsley over the next months then, 361 days after their first game of a prolonged season, they would get the win they needed at Brentford’s Griffin Park on Wednesday.

In a year, Struber – having only previously managed in youth football and Austrian lower leagues – has had his first coaching experience in the Austrian top flight, as well as the Europa League against the likes of AS Roma, and his first taste of English football. On top of that, he has had to deal with Bambo Diaby’s suspension for alleged doping violations as well as the impact of the coronavirus crisis – one of the minor effects of which, and far less important than the thousands of deaths, has been a major logistical problem for football.

If the table had started when he arrived, the Reds would be 12th while they have picked up the seventh most Championship points since the re-start. They were nine points adrift after the home loss to Birmingham City on February 11, seven points when football re-started and five before Patrick Schmidt netted a 94th-minute winner against Nottingham Forest on Sunday at the start of a simply bonkers week.

When Struber arrived, Barnsley were last and had not won in more than three months while they also had the worst defensive record in the division. They let in 33 goals in 16 games before he came in and 36 in 30 afterwards, almost halving the number of goals conceded per game while the points-per-game ratio has more than doubled from 0.6 to 1.3.

The Reds can now manage their way through games while many players have spoken about being given a far clearer role by the current boss than the last one. After four weeks of training in lockdown, they came back more organised and comfortable in a 3-4-1-2.

Struber was far less willing than Daniel Stendel to give second chances to unreliable players, such as Dimitri Cavare and Mallik Wilks, while Toby Sibbick and Cameron McGeehan also paid the price for not fitting the ‘Struber style.’

He instead blooded players from the under 23s, with Elliot Simoes, Clarke Oduor, Romal Palmer and Matty Wolfe all playing their first league games under him and Callum Styles and Jack Walton becoming star men in recent weeks.

He said he has had to be ‘like a father’ for ‘my boys’ but has clearly missed his own family in Salzburg, often hopping on a plane after games when that was still allowed.

He was allowed to bring in experienced players he knows and trusts in January which was a luxury never given to his predecessor Stendel. Struber’s tearful post-season interview, in which he expressed his pride in his players, will endear him just as much to the Reds fans as his extraordinary success on the pitch.

The supporters will be desperate for him to stay and, although he has been very coy about his future, he has hinted he would like to work with this squad again.

Co-owner Paul Conway’s pronouncement that the summer transfer window was the most successful in the club’s history looked suspect at the time and, despite the Reds achieving their goal by staying up, is still questionable.

They survived due to the excellence of their coaching staff and the superb effort of their players but, in order to truly establish themselves in the Championship, they need to rethink their recruitment plans.

Developing young players is noble, brave and rewarding – both financially and for the staff and fans who watch these talents develop. But Barnsley went too far last summer and forgot that these youngsters need help on the pitch, and it almost cost them.

The story has been told so many times in these pages, in angry social media posts, by disgruntled fans on the many disappointing matchdays and even by promotion-winning head coach Daniel Stendel before he was sacked after 11 games. They let four promotion stars from last season leave the club and used their data-driven Europe-wide recruitment searches and strict under 25s policy to recruit their replacements.

Of the 12 players they brought in last summer, only goalkeeper Sami Radlinger was older than 23 – with four 20-year-olds and four aged 21 – while the only Championship experience in that dozen was Aapo Halme’s one start and three substitute appearances and Luke Thomas’ six minutes.  Only Chaplin and goalkeeper Brad Collins had made more than 50 starts in their senior careers.

The four centre-backs brought in, aged 20 or 21, seemed particularly ill-equipped and so it proved, especially early on, as Barnsley went from having the EFL’s statistically best defence last season to one of the worst.

Barnsley, still one of the division’s lowest-payers on wages, spent most of the roughly £17million brought in through promotion and sales in one of their most expensive transfer windows ever. Around £1million, when all clauses and future payments are calculated, is understood to have been spent on each of Chaplin, Thomas, Patrick Schmidt, Mallik Wilks and Mads Andersen.

Of the 12 signings, only Chaplin has been a real success but others have room to develop into very good players for the Reds. It is encouraging that they relaxed their policy in January to allow Struber to recruit his experienced former players such as Michael Sollbauer who has made a huge impact. One area in which you cannot fault the recruitment department or board is the identification of head coaches.

Sollbauer and Struber turned defence from shambles to solid

Before mid-February, Barnsley had kept just three clean sheets in 32 Championship matches and only one in 26 since August.

In the 14 matches since then, they have let in just 11 of their 69, goals in this season – four in the thrashing at Stoke City which now seems like an anomaly.

They kept eight clean sheets in those 14 games, which is as many as in their previous 58 Championship matches.

Key to that change has clearly been the January signing of Michael Sollbauer, who the Reds broke their usual age policy to reunite with his former manager Gerhard Struber.

He arrived having not played for six weeks due to the winter break in his home country, and looked rusty in his first two games, but since then – the own goal at Leeds last week aside – he has been consistently solid.

It is not just his own performances that have helped the Reds, but the impact he has had on other players such as Mads Andersen who has improved massively since having an experienced veteran alongside him.

Andersen and Jordan Williams have also played crucial roles in a back three, after Struber switched to a formation which has provided them with more defensive stability.

Goalkeeper Jack Walton has been well-shielded but also come up with excellent saves when needed and provided a calm and confident presence. The whole team needs credit for the way they blocked, battled and pressed from front to back.

The Reds badly struggled to defend set pieces in the first half of the season then, after some small improvements before lockdown, they clearly worked hard on that during the break as – aside from the disaster at Stoke – they have kept out free-kicks and corners with ease.

The solidity may have come at the expense of attacking creativity and threat, as Barnsley scored just six goals after lockdown, but it was what they needed to do to survive.


Captain fantastic and top-scorers have been star performers

It is appropriate that Alex Mowatt, Conor Chaplin and Cauley Woodrow made the most appearances for the Reds this season as they have been their three star players throughout the campaign.

Although Woodrow and Chaplin’s goals dried up towards the end, their regular scoring kept Barnsley in with a chance when the Reds were massively struggling to defend.

This season is the first in ten Championship campaigns since 2002 in which Barnsley have had two players with more than ten goals each. As for Mowatt, he has taken his outstanding form from League One into the Championship, despite being shunted into different positions in an under-performing and much-changing team.

The captain has been an extremely reliable and consistent performer who fought bravely all the way through despite hope seeming very scant at many points.

Those three players, as well as the man with the fourth most appearances Jacob Brown, are likely to be targets for other clubs this summer. But, although they may need to sell one or two to balance the books after the impact of Covid-19 and fanless matches, other clubs may not have   as much money as previously while the Reds must avoid a firesale like  last summer.