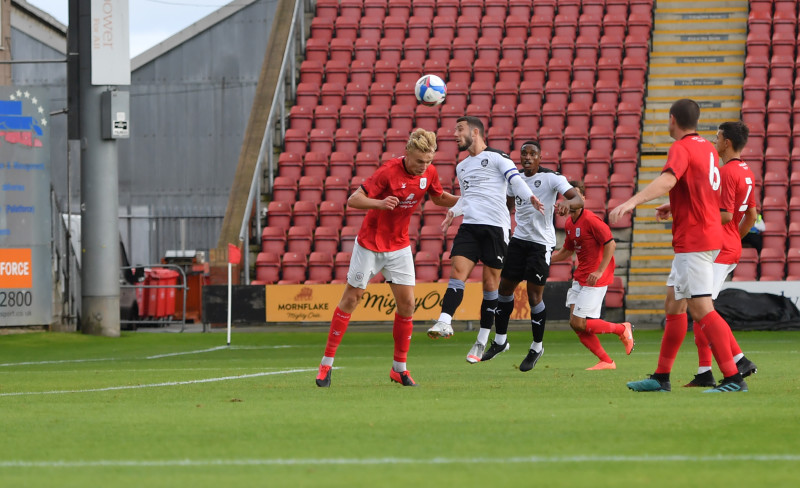 There always seems to be some drama around the corner for Barnsley Football Club.

The Reds, although still in a pandemic and waiting for a seemingly never-ending investigation into Bambo Diaby’s alleged doping violation to be concluded, looked to be sailing into smoother waters in early August.

They survived in the Championship in astonishing circumstances at Brentford after 311 days in the relegation zone and are determined to keep Gerhard Struber as well as his star players then push up the table next season.

But suddenly, after a rare quiet fortnight, the news emerged that the Cryne family were taking legal action against the other ownership group of the club – the consortium led by Chien Lee and Paul Conway who have 80 per cent of the business.

Both sides have been critical of the other in statements, although the Crynes – who are seeking to recoup £2.75million they are owed for the sale of the club – are keen to settle the matter as soon as possible and avoid a lengthy court battle.

The concern for supporters, as well as long-term worries over the stability of the club, will be whether this behind-the-scenes battle with hinder the good work done by Struber and his players. Sources at Oakwell insist it has nothing to do with the football and Jean and James Cryne’s attendance at Crewe on Saturday suggest they are fully behind the staff and players.

There is recent precedent in South Yorkshire of a club achieving outstanding success in the Championship despite its owners being at war with each other.  Sheffield United reached the Premier League two years ago while Kevin McCabe and Prince Abdullah Bin Mosaad battled over control of the club.

While the statements were flying to and fro from the Crynes and their fellow owners, the Reds were actually having a very good week in terms of football last week. Struber put his squad through their paces at St George’s Park and was joined by two new coaches as well as the first signings of the summer in Kilian Ludewig and Dominik Frieser.

Two signings is more than almost half of the Championship clubs made in the first four weeks of what has so far been a very quiet transfer window.

Those recruits – and the January signings of Michael Sollbauer and  Marcel Ritzmaier – indicate change in policy.

Previously, many of the Reds’ incoming signings had been identified by the recruitment department, the data-driven side of which is headed by James Cryne and nicknamed the ‘spreadsheet’ by fans.

But, since the arrival of Struber, all the signings have been players the head coach knows from his time in Austria.  It will be interesting to see if that continues as the Reds attempt to bring in several more players, with left-back and central midfield some of the areas being looked at.

There has also been a relaxation of the strict policy of signing only under 25s, with Sollbauer, Ritzmaier and Frieser all older than that and with hundreds of games under their belts to provide much-needed experience.

Ludewig was also the first loan player to arrive in two years since Oliver McBurnie as the Reds – previously reluctant to develop other club’s players instead of their own – accept that the addition of a few loan stars can add quality not available otherwise.

Struber’s predecessor Daniel Stendel was allowed some say on signings, recruiting his former players Sami Radlinger and Mike Bahre as well as Mallik Wilks, who impressed him in League One, but most were brought in by the recruitment department.  Radlinger and Wilks left the club before the end of the season and Bahre looks set to follow. It must be hoped that Struber’s selections are more successful as Barnsley begin a season which will see them play at least 48 games in 35 weeks.

The Reds are due to make 12 trips of 150 miles or longer and there will be at least 13 midweek fixtures, including Tuesday evening journeys to Cardiff, Watford, QPR and Wycombe.  The first three matches appear a fairly gentle introduction as Barnsley host Luton Town, their fellow great escapees of last season, on the opening day before visiting Reading then welcoming newly-promoted Coventry City, who have not played since March.  That is an opportunity to get some precious early points on the board before, hopefully, fans return.

The first game in front of fans could be the October 3 trip to Middlesbrough then, after the first international break, Oakwell’s terraces could be occupied once again when Bristol City visit.  That is far from certain as, although current government guidance is that fans can come back from October, local lockdowns are being imposed across the country as the virus still rages while there is understood to be plenty of logistical work to do to get supporters back in their seats.

Moving forward in the calendar, December immediately catches the eye as Barnsley are due to play eight matches in the final month of the year.  They include derbies at Sheffield Wednesday before they host Huddersfield Town on Boxing Day and visit Rotherham United three days later.

By then, the Reds will have hoped to have brought 2020 – one of the most chaotic and dramatic years in their history – to a much more stable conclusion on and off the pitch.