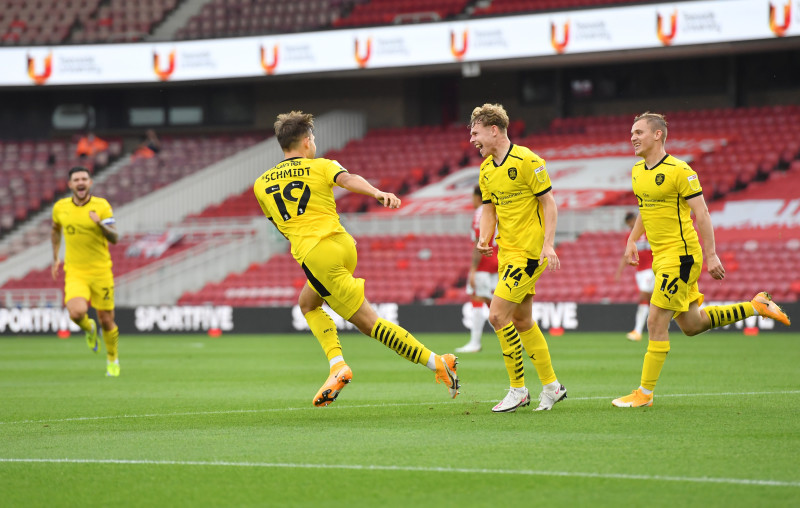 Gerhard Struber is happy his Barnsley side will get to visit Premier League giants Chelsea in the third round of the EFL Cup after a 'good but not brilliant' win at Middlesbrough in the second round.

The Reds triumphed 2-0 at the Riverside Stadium thanks to first half goals by Patrick Schmidt and Jordan Williams.

Struber said: "It was not a brilliant performance, but it was good. In the first half we had good solutions and played well on the ball. Middlesbrough could not calculate our game style and we had a good handling of their aggression. The second half was a fight with set pieces and free-kicks. My boys showed me they are ready against a good physical team. They handled the long balls with a good structure. We deserved the win."

Barnsley will now visit Chelsea in the next round next week. Struber said: "It is a bonus game. Our focus is on preparing for Reading. I am very happy for my team that we can play in Chelsea. It is a big chance to show what we can do.

"Chelsea is a completely outstanding team on another level to us. We are in the Championship and I hope everyone remembers we have the lowest budget in this league. When we see the team from Middlesbrough, they have completely different individual quality. But when we stay together shoulder to shoulder, it is not always about the transfer value, it is the spirit in the team."

Struber was pleased with the players who came into the side, such as debutant Michal Helik. He said: "It is very good when I can use my whole squad. Many players showed me they are ready. Helik showed me he is very helpful from long balls from the first second. He is ready.

"Luke Thomas, Patrick Schmidt and Jordan Williams showed me a good performance and so did Brad Collins in the goal with a fantastic job. I have many thoughts in my brain which one will play against Reading."

Schmidt opened the scoring with his first goal of the season. Struber said: "We create a good matchplan today. We showed the boys an animation of the goal that Patrick scored, then they scored this goal."

Schmidt added: "We do this every week before matchday. We play a three v two in the 18-yard box. The goal was the exact situation that we trained. I knew what to do and it worked well.

"I am very happy for the team because we played very well. We kept a clean sheet which is very important for our self confidence."

Struber was pleased with his team's attitude after the league loss to Luton on Saturday.
He said: "We were surprised by the aggression against Luton. We handled it tonight and then Middlesbrough went back and were more passive. Everyone was ready to fight."