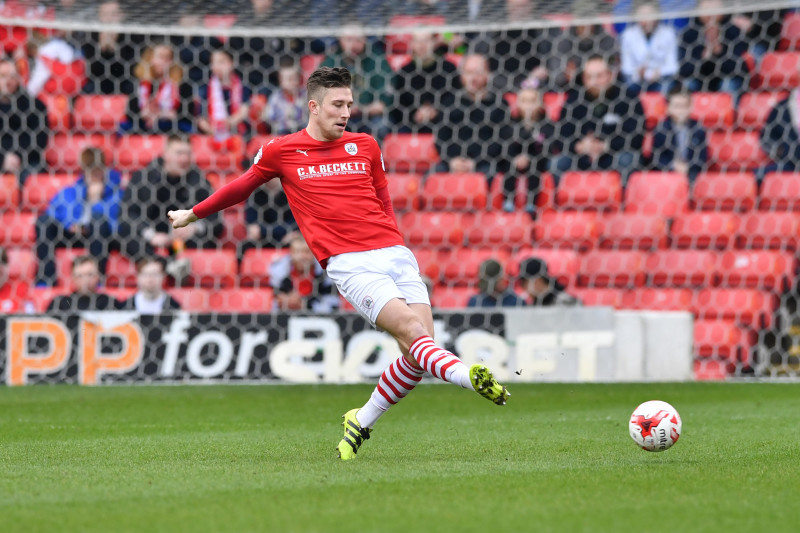 Angus MacDonald's new contract at Barnsley is the latest highlight in a remarkable career which seemed to have finished at the age of 16 when he was told he would have to stop playing football due to a blood clot in one of his lungs.

Up until 2008, MacDonald was one of the most highly-rated young centre-backs in the country. He was playing for England under 16s alongside future full internationals Jack Butland, Ross Barkley and Jonjo Shelvey and had been handed a four-year professional contract by Reading who were in the Premier League.

But he then spent 19 months out of the game after the potentially life-threatening blood clot was discovered.

He told the Chronicle: "The doctors said I would never play football again and that I would have to take tablets for the rest of my life. It was devastating.  I spent six weeks in hospital and then had to go in every other week for a year and a half.

"I was on tablets to thin my blood and I couldn't play sport of any kind because if I got a cut it might not stop bleeding.  I was told that if the clot moved, then my life could be in danger. It was a very dark time in my life but I always hoped that I could recover from it and, in the end, I got through it and I am absolutely clear of it now.

"That experience makes me feel really grateful to be where I am now, playing football for a living at a high level."

When MacDonald returned to action after the illness, he was put back into the England under 19s squad and played four times for them in 2010. But the next time he would pull on a national team shirt was in the England C side – for non-league players – three years later after being released by Reading without playing a first team game.

He rebuilt his career in the Conference with a season at Salisbury City then two with Torquay United, who sold him in August of last year to Barnsley where he has impressed as an almost ever-present centre-back alongside his former England C colleague Marc Roberts. He initially joined the Reds on a two-year deal but has now extended his contract until the summer of 2019.

He said: "I am over the moon to sign the new contract. It has been a fantastic six months or so at Barnsley and I am very grateful to them for signing me and trusting me to play in the Championship.  Hopefully I can repay them for the trust they have shown in me."

MacDonald has been praised by Barnsley's head coach Paul Heckingbottom and Reds fans but he admits the only real blemishes on his generally impressive first season at Championship level are the three own goals he has scored. Two of them have come in the last two away games at QPR and Norwich while the first one was in December at Sheffield Wednesday who the Reds host tomorrow when MacDonald will come up against his former team-mate Sam Winnall who moved from Oakwell to Hillsborough in January.

Angus said: "The own goals are the only negative of this season for me.  They were all quite unlucky but there are things I can work on in training to make sure they don't happen again.  It was really disappointing to score that own goal at Hillsborough but hopefully I can have a better game this time.

"Derbies are always the games you want to play in the most.  The fans will be right behind us and it should be a great atmosphere. We were unlucky against them away and we want to put it right in the home game. I think our fans will be on Sam Winnall's back from minute one and hopefully myself and Marc can keep him quiet as well as the other players Wednesday have."

MacDonald has been able to relax during the two-week international break which has just finished, but he would be happy to be busy during those parts of the season in the future if he were to be called up by the Scottish national side. Although he has represented England at three different levels and was raised in England, he qualifies for Scotland whose most recent squad included 13 Championship players.

"I am eligible to play for Scotland through my dad's side of the family. My granddad is Scottish.  When I was playing for the under 16s against Scotland, the commentators couldn't believe I was playing for England with a name like mine. Playing for Scotland is something I would definitely be interested in and I have heard a few rumours about them looking at me. But they are only rumours and I am not getting carried away. Playing regularly in the Championship can only help my chances and I will just wait to see if they approach me.

"I have enjoyed the international break. It was nice to have a bit of a break from the madness of the games. I just chilled out and went on a few walks with my dog.  It was nice to relax a bit before the final period of games this season. We want to finish as high as we can in the league and end the season on a high."