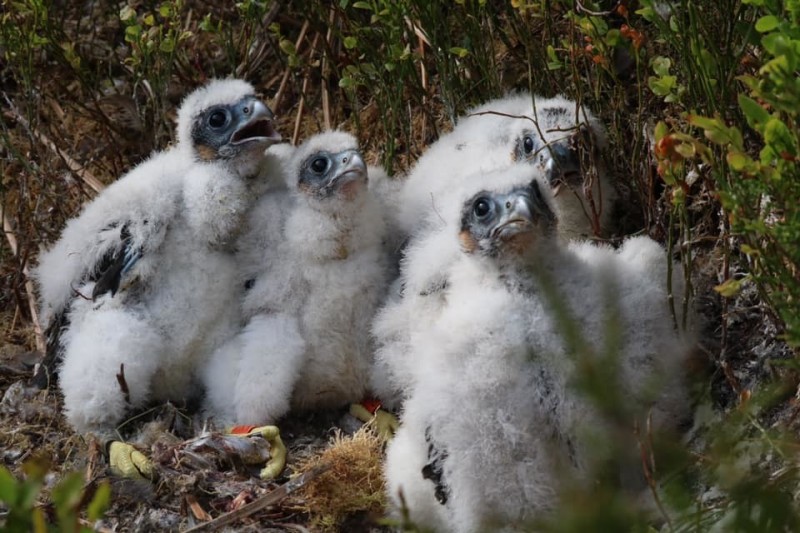 PEREGRINE falcons have returned to moorland in Barnsley’s most rural countryside having ‘thrived’ as a result of lockdown, wildlife experts have claimed.

Four chicks - three females and one male - across two nests have successfully fledged in grouse moor areas near Dunford Bridge.

Peregrines are among the world’s most common birds of prey but they have suffered years of persecution in the UK which has resulted in their numbers dwindling.

Conservation efforts have been made and as part of this, these chicks have been fitted with two non-invasive identification rings that will enable conservationists to monitor their progress and health.

“They were all ringed at the ideal age and, having now fledged the nest site, will be trained to hunt by their parents.

It comes just months after protesters claimed some protected bird species had eradicated due to grouse-shooting in one of the town’s beauty spots.

Campaign groups Ban Bloodsports on Yorkshire’s Moors and the League Against Cruel Sports jointly wrote to Yorkshire Water, the owner of land around Range Moor, Langsett, with what they said was evidence relating to the alarming decline.

There are no breeding pairs of ring ouzel now, while other species which form part of a healthy upland habitat - including hen harrier, merlin, short-eared owl and dunlin - are completely absent but falcons’ return has been cited as a huge step forward.

More than 135,000 people have signed a petition to Yorkshire Water’s chief executive, Richard Flint, urging the company to clean up its act by banning shooting - something which campaigners believe will also signal a start of rare wildlife returning.

Richard Bailey, of the Peak District Moorland Group, added: “For most of us lockdown has been a difficult period. However, for wildlife it has meant a huge, and largely welcome, reduction in disturbances.

“These successful nests are a reminder of the positive outcome for our wildlife on local moorland.”

Peregrine falcons are enjoying a turnaround in their success and they are known to be charismatic birds that have long captivated spectators with their distinctive hunting style.

Spotting their prey from high above, they drop into steep drives, known as ‘stoops’, reaching speeds of over 200mph, making them the fastest animal in the world.

“It is fantastic new that peregrines have had ‘lockdown luck’ on moors managed for grouse shooting and is a testament to the daily conservation efforts of the gamekeepers,” Amanda Anderson, director of the Moorland Association, added.

“Successful nests in places that have not been occupied for many years has thrilled watchful keepers and we hope that now the chicks are on the wing, returning visitors will be able to enjoy seeing them.

“Watching a ‘stoop’ as they hunt their prey is exhilarating but understanding that the prey is also there because of active conservation on the back of grouse management completes the experience.”