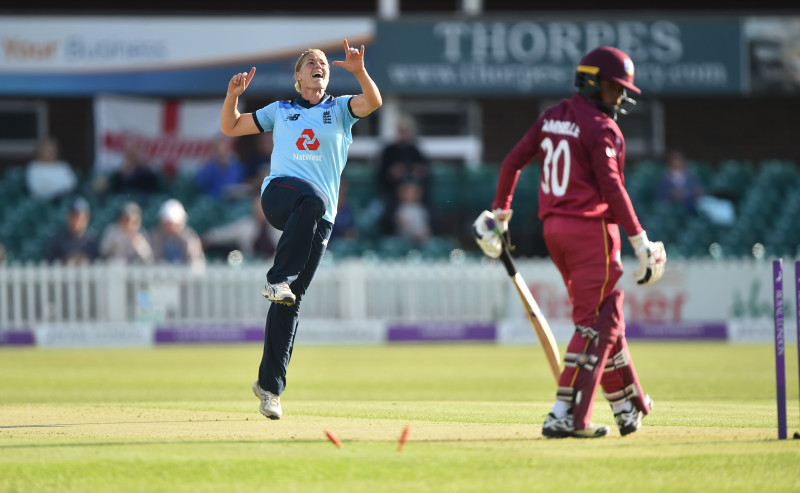 Katherine Brunt is relieved that she will play for England this year after the West Indies agreed to tour in September.

No women’s cricket has been played since the World Twenty20 in March while the 50-over World Cup, due to be staged early next year, has been pushed back to 2022.  South Africa were supposed to tour but pulled out last week then the West Indies stepped in this week. There will be five Twenty20 games, all played in a ‘bio-secure bubble’ Derby, starting from September 21.

They will all be shown live on Sky Sports while the third fixture – on Saturday, September 26 – will also be on broadcast on BBC TV, the first time a women’s cricket game has been on free-to-air television since 1993.

Brunt, who has been in a training camp with England at Loughborough for eight weeks, said: “It was annoying that South Africa pulled out because they said they would come. It’s on them and the politics over there.  That’s gone now and it’s a miracle for the West Indies to come over here with hardly any preparation.

“That was always the preferred option and we just want to get back into action because it’s been a long wait. It’s really good that one of the games will be on the BBC so more people can watch us play. There was only so much disappointment you can take. We had been let down quite a lot already.”

Later in the autumn, Brunt and her fiancee Natalie Sciver – who also plays for England – are set to play in the Big Bash Twenty20 League in Australia.  She said: “It will be a big investment if Cricket Australia can put that on. Myself and Natalie have said that we will go. We will have to fly economy because of cutbacks then we will be quarantined for two weeks and stay in one bubble for the whole tournament.
It will be rubbish and we are only going for the money, really.”

The coronavirus crisis has highlighted the gap between men’s and women’s sport, with the former often providing much more money, but Brunt appreciates the work of the ECB this year.

“There is some inequality because women don’t bring in the big money and the boards need to prioritise that, but it seems as though the ECB are trying everything they can to give us some games. They are spending about half a million pounds on chartering flights, getting hotels and putting our games on – that is immense.  It’s way more than we ever expected. For me, the problem is with the governing bodies of the other countries who aren’t prepared to let their teams play.”

Brunt, who turned 35 this summer, has played 217 games for England in a 16-year career which has seen her take 274 wickets.  She admits she has considered retiring but is tempted to continue until 2022 when the 50-over and 20-over World Cups are scheduled as well as an Ashes series and the Commonwealth Games in Birmingham in which England are set to field a team.

She said: “I am in limbo. I am ready to retire and, if I had to retire tomorrow, I will be happy with that. I don’t have a purpose anymore because there aren’t any big competitions in the next year.

“During Covid, I have had a taste of what retirement could be like and I really enjoyed it. Cricket feels more like work now which it never really did before.  My plan is to play against the West Indies and in the Big Bash then have a good Christmas at home and have a good think in the New Year.  My body feels great one minute then really bad the next so it is hard to know what to do.

“There is no major cricket in the next year so it would be silly to make a definite decision until we get closer to 2022 when it sounds like they are trying to kill us with the schedule of two World Cups, and Ashes series and the Commonwealth Games.  It’s a really strange time and hard to find the motivation.  A lot of us were focusing on the World Cup but that has gone now.  Everything is up in the air.”