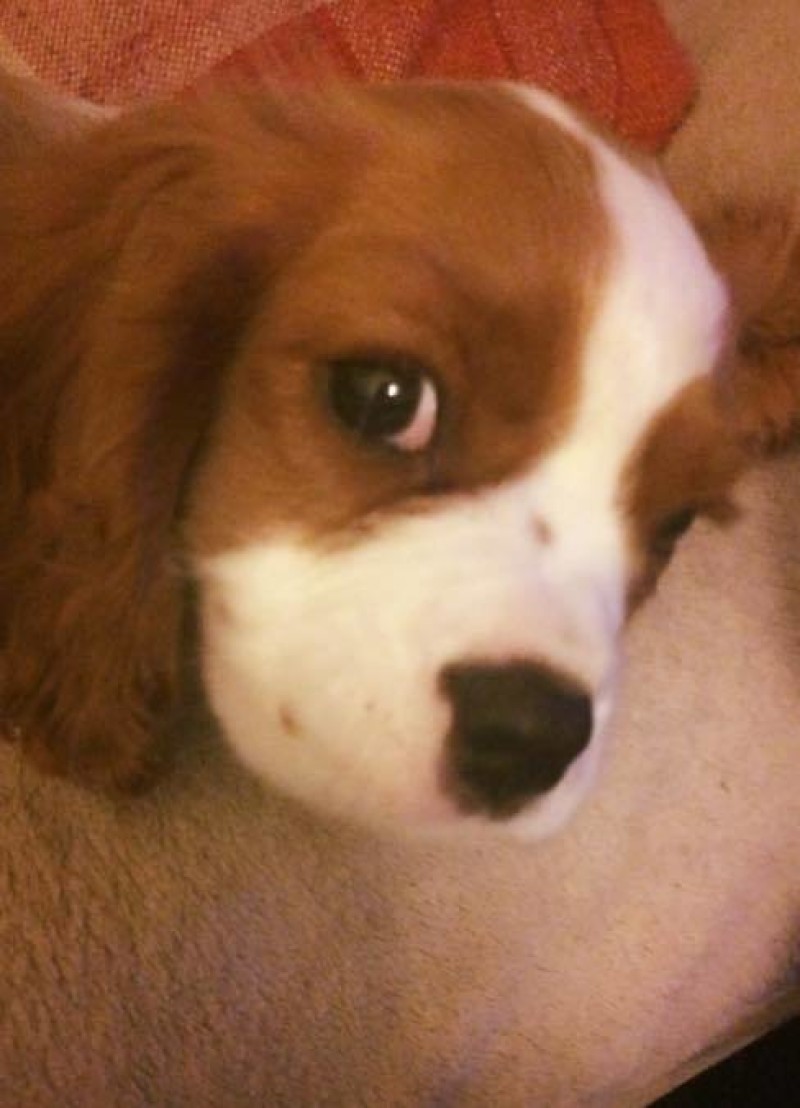 THE OWNER of a poisoned puppy is warning others to be careful when out walking their pets.

Cavalier King Charles spaniel Clegg had to be put to sleep hours after he picked up what is believed to have been poisoned meat while on a walk at the Fleets, off Smithies Lane, Honeywell, with owners Bernadette Eaton and her husband Shaun.

The dog was on an extending lead and Shaun saw the dog had picked something up and rushed over to take it off him.

But once they got back to their Hartington Drive home they noticed Clegg, who was only 15 weeks old, drinking profusely.

Within half an hour, he had collapsed, but despite taking his to the vet’s, they were unable to save him and he died hours later.

Staff at The Pet Vet on Wakefield Road, where he was taken, said he had suffered brain damage caused by poisoning.

Bernadette said she normally takes in elderly rescue dogs but Clegg was the first puppy they had got from a breeder, with the aim of him becoming part of their family for a long time.

They had only had him for six weeks before his death.

Bernadette said: “He was perfectly healthy on the field and then picked something up in his mouth. My husband ran over in a matter of seconds, I don’t even think he swallowed any. We thought it was a piece of wood and he came home and had a lot to drink. But within half an hour he collapsed. We rushed him to the vet who did everything they could but confirmed he had been poisoned.

“We don’t know what the substance was and we probably will never know. They would have to test 100 different types and do a post mortem.

“After we left me and my husband went back on to the field with flashlights and found a bit of curled up meat where Clegg had dropped it.

“Clegg survived until 1am, then the vet rang and said there was nothing they could do. It had acted on his brain and nervous system and caused severe brain damage. It was very quick acting. He didn’t even vomit.

“We are absolutely devastated. The field is a very popular place with dog walkers and we don’t want anybody else to go through what we have been through.

‘We have always been very safety conscious, we don’t leave them for more than a few hours and never take our eyes off them. But it only took a few seconds. Within half an hour our dog was dying. We don’t know why anyone would do that.”

Bernadette said Clegg’s death is just one of many similar incidents in Barnsley this year, including in Locke Park.

“We don’t know if it is someone on a crusade against perceived dog foulers. But it is just a nice area there, children play on that field, and it is now so dangerous. Not that children would pick up some meat off the ground but the fact they are poisoning that area anywhere is disgusting.

“I have owned dogs for more than 20 years and this is the first time something like this has happened. We just want people to be aware and if they exercise in the area, keep their eyes open. Our dog really suffered at the end and he was just a baby, he had everything in front of him, years of joy and compassion.

“We don’t want another to go through that. It was horrific and I will never get it out of my head. I have never seen a dog in that condition.”