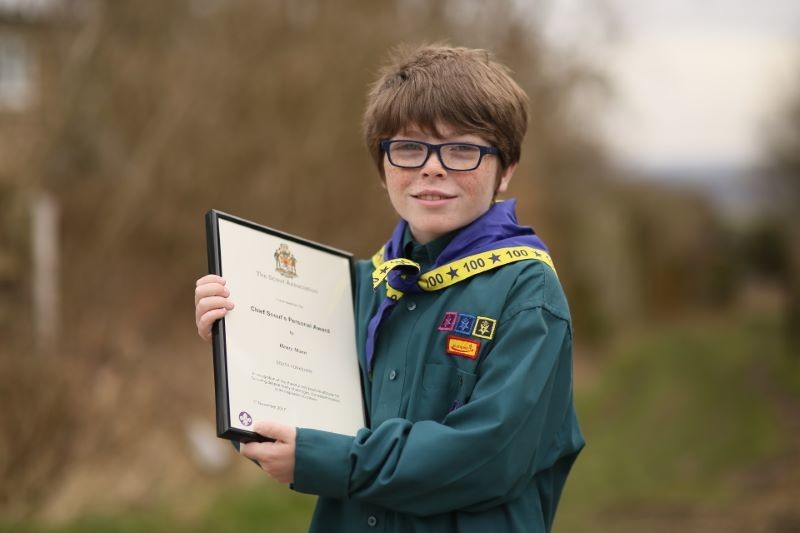 HENRY Mann has been recognised by chief scout Bear Grylls for his achievements in scouting.

And his determination to take part in the adventurous activities organised by Penistone Scout Group, despite living with Cystic Fibrosis, saw district commissioner Tina Langley nominate him for a Young Champions Award.

Henry, ten, from Hollinmoor View, Thurgoland, has been shortlisted in the Young Adventurer category.

Mum Sarah said Henry goes through two sessions of physiotherapy every day, balances numerous medications and has to be careful about his exposure to damp, mould and other variables to ensure his CF - which is a genetic disorder mainly affecting the lungs - is not triggered.

Despite all this, he loves attending scouts as it fosters a sense of independence. And he is something of a daredevil, taking on any challenge he can.

Sarah said: “He joined Beavers aged six, plays football and hockey at school. And with scouting he gets to do lots of outdoor activities like ziplining, climbing walls, crate building, rifle shooting. The only thing he cannot do is anything around stagnant water and he has to be mindful of hygiene as it can affect his chest.

“It makes me really proud to think of what he does and for him to be nominated. He does go through a lot sometimes but he doesn’t let it get him down.

“He went for his chief scout silver award and while he was there, was surprised with the personal award which apparently goes to the chief scout Bear Grylls who reads through everything and decides who is awarded.

“He is full of beans and so chatty. And at the scouts they accept him for who he is. The Scout Leaders are so brilliant with him and will adapt things to accommodate him. We try to get across to him that CF isn’t Henry. Henry is himself and we don’t want the condition to take over his life, which it doesn’t.”

Tina said: “Henry has been an active member throughout the time he has been with this group and received both his bronze and silver Chief Scouts Awards, these are the top achievement for the sections. He has worked hard to achieve these along with other badges, including Nights Away, either under canvas or in a building, cyclist, time on water and hikes badges.

“Henry manages life very well and is a popular young man. He has often attended Beavers and Cubs when he has not been well enough for school as he is keen to be involved in every aspect of scouting and is often disappointed to find that he cannot attend camps or other events, including weekly meetings, due to his condition. He is always keen to complete his physio on camp as quickly as possible to ensure that he doesn’t miss any of the activities on offer.

“Henry has to work extra hard to achieve adventurous activities that his peers can complete with ease. From the badges he has achieved in his time in scouting, it is clear that Henry has an excellent sense of determination to achieve his full potential. He is very conscious of the differences and challenges he faces and often states that he wants to do the same as all his friends, which in scouting, he has fully achieved with support.

“Henry is described by those who know his as an extremely friendly, happy and helpful young person who is keen to try all new experiences and join in with all the fun. However the adults involved in his life recognise that this is not always possible and support Henry to achieve his full potential both in scouting and education as well as everyday life.”