Change of habit at loved pub 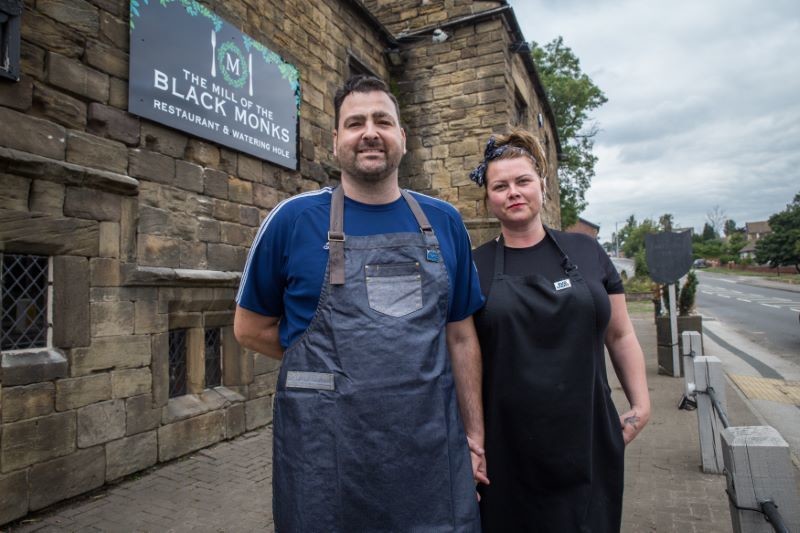 THE COUPLE behind the reinvention of the Mill of the Black Monks are hoping they can ‘bring it back’ to its former glory.

Emma, 42, said: “We jumped at the chance to take the building on. It’s been a dream of mine to run it properly and call it my own.

“I’m from Lundwood, all my friends are from here. I remember being young and coming here with my parents.”

The pub has fallen into disrepair over the last few years, with the recent revelation of a cannabis farm being found in the cellar denting its reputation further.

Emma, of Station Road, said: “I saw it with my own two eyes. The locksmith had to bust the lock to get into the downstairs area.

“It was so dirty, it hadn’t been touched for I don’t know how long, there was stuff all over.

“They were using what used to be the pub as storage, the lights had no bulbs and the fixtures had been smashed, the chairs were boxed in and covered with cardboard.

“We have taken all the covers off the old church pews and recovered them, all the old pictures are back up.

“This was the original floor underneath every flagstone is a number which is the order they originally went down in, and we had to clean them and put them back in the same order that the monks would have had them in.

“It’s got a beautiful stone floor and sandstone walls. We’ve brought them back to life. We have our beer cellar installed downstairs, so it’s now being used as was intended.”

Emma said it was her father who initially alerted her to the availability of the pub.

From there, Emma and Lee had meetings with owner Malcolm Lister, who agreed they could take over the property on a ten-year lease.

“It was like getting your exam results, the mix of not knowing and excitement. I actually cried when they told me they’d like us to take over,” Emma said.

Th couple have decided to leave their other businesses Bailey’s Cafe in Barnsley market, which will close in September, and Kitchen Bistro and Tapas on Pitt Street, which has been sold.

Emma has brought across her entire staff from the cafe, who will provide traditional pub food in the daytime.

Interviews are currently being held for a new chef who will take over the kitchen in evenings.

Emma said that someone had left her a cake, flowers and bottle of Prosecco at the pub.

She said: “It’s always been a community pub. It’s like people are saying thank you for bringing the Mill back, it’s really touching.”