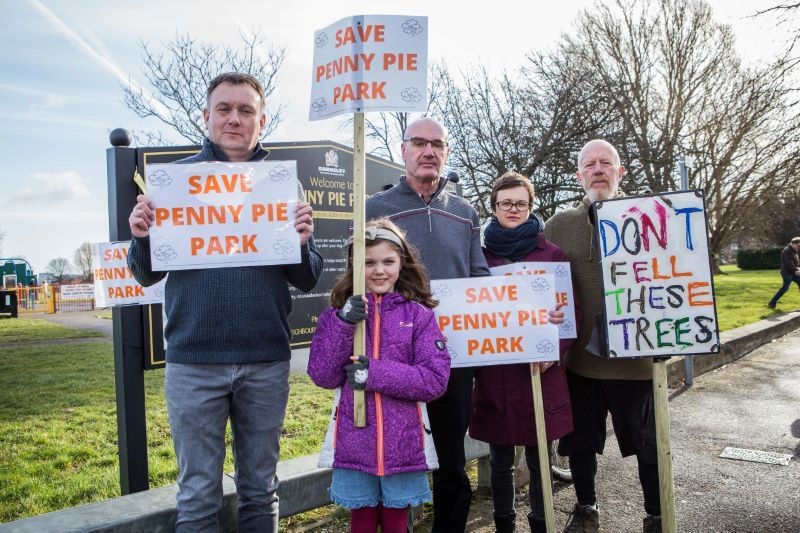 CAMPAIGNERS opposing plans to carve up a popular park in order to create a new one-way ring-road are set to hold a night-time protest outside Barnsley Town Hall.

Members of Save Penny Pie Park, who amassed more than 2,700 signatures against Barnsley Council’s plan to alleviate congestion for town centre-bound traffic off junction 37 of the M1, say they will meet in a last-ditch attempt to sway ruling cabinet members’ opinions.

The council - whose planning board awarded permission for the controversial scheme off Dodworth Road before Christmas - then had a statutory obligation to consult with the public as its plan impacts the park, land which is currently designated as public open space, and a part of it will be lost.

A report, which was compiled as part of the land appropriation consultation, will be discussed at the cabinet meeting on July 10 where the scheme is expected to be finalised.

Campaigner Peter Giles said: “We will be holding a night-time vigil the night before cabinet meets, likely to endorse the appropriation, on the steps of the town hall.

“It will be a further reminder that we do not agree with our elected members and their officers. The loss of any greenspace, the needless felling of urban trees, the failure to hear the voice of the majority and the further accommodation of motor vehicles in our polluted town is regarded as totally unacceptable.”

Coun Peter Fielding, who represents the Dodworth ward, urged highways bosses to go back to the drawing board given the huge public backlash the scheme has had.

“We amassed a huge petition and hundreds of written objections originally before the plan was approved, but we have had more than 100 more to the latest consultation,” he told the Chronicle.

“Penny Pie Park is clearly treasured and it needs to be maintained for future generations to enjoy.

“We’re urging the council to go back to the drawing board as the scheme is very much against the public’s wishes.

“There are multiple concerns about air pollution, road safety and traffic before you even mention about the carving up of a much-loved park.

“We have to keep fighting to protect it as it’s clearly what the community want.”

There are currently 239 trees in the park and 75 will be removed to make way for the road, although the council said this week it will plant more than 100 native trees to alleviate campaigners’ environmental concerns.

A statement from council leader Sir Steve Houghton added: “Data from Barnsley Biological Records Centre does not suggest that local populations of bird species could be put at risk by the development, provided the proposed mitigation and enhancements are put in place.

“The hedge area alongside the railway line at the north forms a useful wildlife corridor which should be retained, and that was endorsed. The removal of some of the trees which form a line down the west, south and east boundaries will affect the continuity of that wildlife corridor but the impacts could be mitigated for.

“While we will need to remove some mature trees, those that have been selected for removal do have lower ecological value.

“It is Barnsley Council’s aspiration to have a high quality, aesthetically pleasing landscaping to the remaining park areas, with at least 100 new native, extra heavy standard trees to be planted and therefore, overall at least a minimum of 25 more trees in Penny Pie Park.

“The extra heavy standard trees will be planted in the appropriate season. October to February is generally the tree planting season - any failures will be picked up in the following winter period and will be replanted.

“The landscape management plan will be carried out in accordance with the approved plan and will be part of the next stage of more detailed plans.”