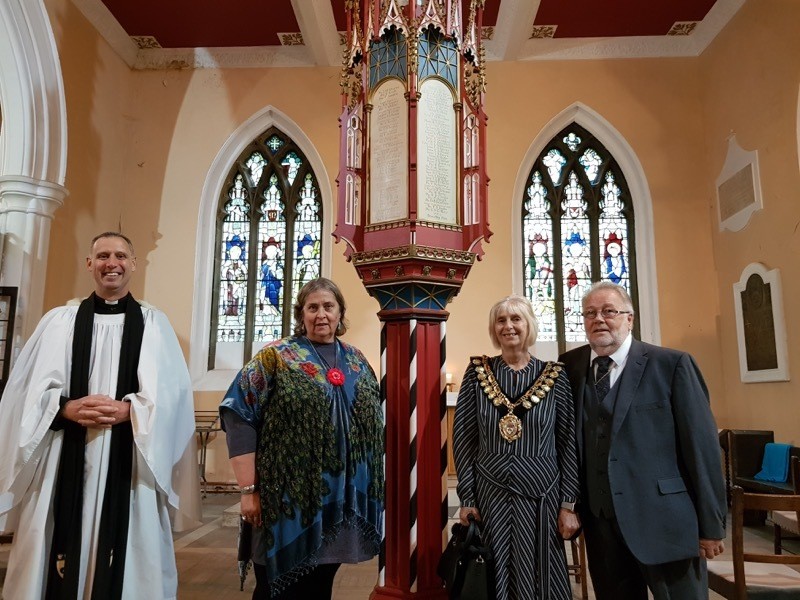 A PROJECT ensuring the memories of 200 Barnsley soldiers who fell during the First World War will be preserved has reached a milestone - as the pillar bearing their names was rededicated.

The church is the site of the restored colours of the Barnsley Pals, and a memorial pillar situated in the former lady chapel - now a dedicated war memorial chapel.

The hexagonal timber pillar, first dedicated in 1922, bears the names of 200 people - among them members of the 13th and 14th Battalions of the York and Lancaster Regiment, and various other regiments and branches of the armed forces.

There is also the name of one woman, Dorothy Fox of the Voluntary Aid Detachment, about whom Mayor of Barnsley Coun Pauline Markham spoke before the rededication was confirmed by Rev Canon Stephen Race.

She was engaged as a nurse on the first day of the Battle of the Somme, serving at Ipswich Hospital, Northumberland VA Hospital and then Manchester’s Western General Military Hospital before dying of pneumonia on November 3, 1918.

Her inclusion on the memorial, Rev Stephen said, ‘reminds us that the war was fought on many fronts by many people’.

The rededication follows the renovation of the pillar, which along with the restoration and framing of the Pals colours forms the crux of a project spearheaded by local historian Jane Ainsworth.

The project has been funded by the War Memorials Trust, South Yorkshire Community Foundaton and Barnsley Council, and the recently-established Friends of St Mary’s group.

“The six panels had been damaged by water ingress and general age,” said Jane.

“So we fundraised to have it cleaned and conserved, and had the colours framed, and we’d just finished the work in March when the church was locked up.

“So, not many people have seen the pillar as it is now.

“The conservators did say they’d never come across anything like it, as a memorial.

“Most importantly, we wanted all the names to be readable, so people can pay their respects to everyone on it.”