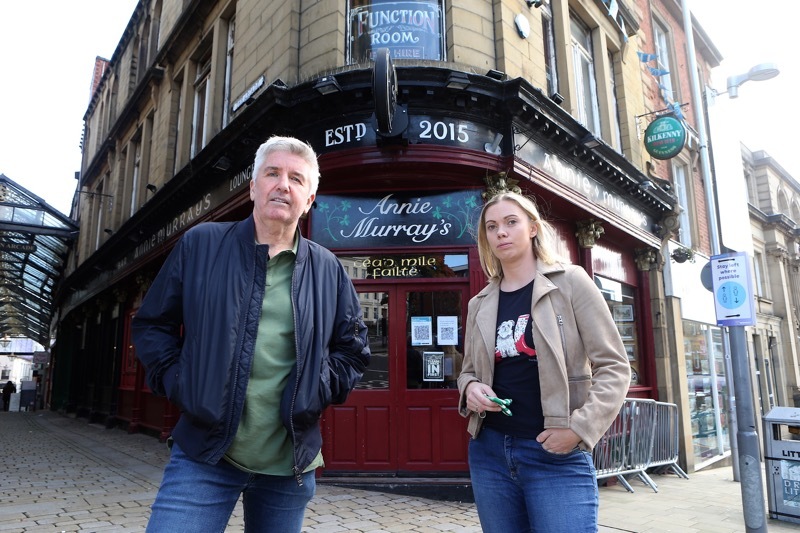 PUBS across Barnsley will face their ‘toughest-ever’ fight for survival and are relying on a pre-Christmas reopening after the country was plunged into a second spell of lockdown yesterday, worried landlords have admitted.

The town’s hospitality sector - which reopened in July - has been hit hard in recent months with 10pm closures, table service and food-only restrictions being phased in.

It led some landlords including Paul McNicholas - who runs 00 Bar, Annie Murray’s and Hill 16 in the town centre - to opt against opening and he told the Chronicle it is ‘essential’ that boozers are allowed to open their doors for the lucrative Christmas and new year period.

He said: “It’s been a struggle but we’re having to remain optimistic that we’ll have that reopening to look forward to, just in time for what’s our busiest period of the year.

“January and February follow and they’re the quietest months in the year, so it doesn’t really bear thinking about missing out on Christmas trade.

“We’re receiving help from the government but as ever, we could always do with more as the situation is precarious.”

Pubs contributed almost £50m to Barnsley’s economy last year and provided more than 2,500 jobs - figures which are expected to dramatically fall in 2020 as a result of coronavirus.

The lockdown, which is due to end on December 2, is expected to be followed by the three-tier format which was in place prior to yesterday’s shutdown.

The Barnsley branch of the Campaign for Real Ale (CAMRA) warned widespread closures will be seen - unless cash-strapped venues are helped and are back in business next month.

A spokesman said: “It is absolutely devastating for local pubs and breweries across Barnsley, Doncaster, Rotherham and Sheffield.

“Publicans have done everything to make their premises Covid-secure.

“They have been operating at reduced trade for months while trying to recover from both the first lockdown and months of reduced consumer confidence as a result of restrictions like the curfew.

“If pubs are to avoid becoming a sacrificial lamb then they need a decent, long-term financial support package. This must properly compensate pubs for having to close altogether.

“It also needs to help pubs pay wages before the new job support scheme kicks in, as well as providing help in the weeks and months after restrictions are lifted if pubs and breweries are to have any chance of getting back on their feet and avoiding having to close their doors for good before Christmas.”

The government performed a U-turn and allowed boozers to sell takeaway alcohol - a move welcomed by CAMRA - but it is one that ‘won’t be enough’ to transform their fortunes.

“We’re continuing to call on the government to bring in a comprehensive, long-term financial support package to support all pubs and breweries through the lockdown and the tough months that will follow this winter,” the spokesman added.

“Without a sector-specific support package, we risk seeing Barnsley’s pubs and breweries closing their doors for good.”
Author: Josh Timlin