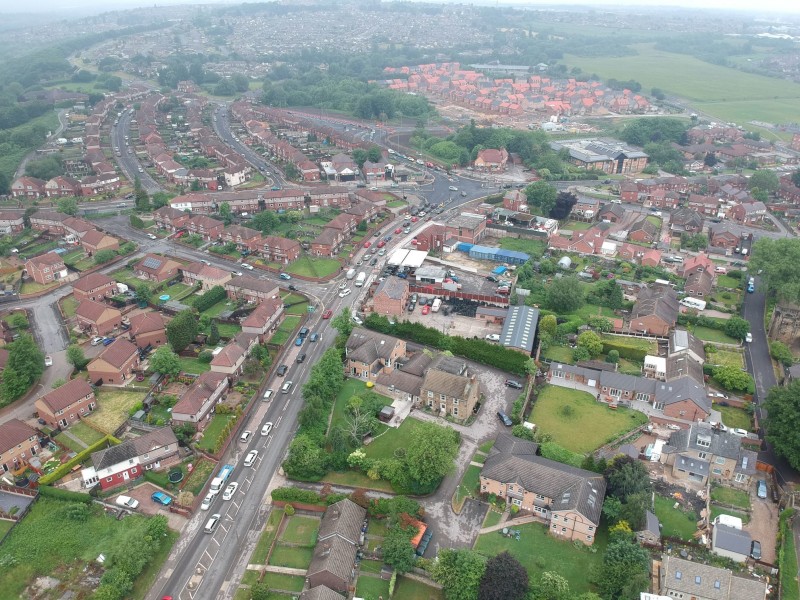 NEW traffic lights which have replaced a bottleneck roundabout caused chaos when they were switched on for the first time after more than a year of roadworks to install them.

Cundy Cross roundabout has been removed completely and replaced with a traffic light-controlled junction as part of a £1.5m scheme.

The idea was to help improve traffic flow through the area and to accommodate the extra traffic generated by the 192-home estate being built on the former Priory School site. As part of the works a new link road into the estate is being built which is separate from the junction a few yards further up Rotherham Road.

But after the new lights were turned on for the first time last Thursday, scores took to social media to complain of chaos with reports of queues stretching in opposite directions as far as Stairfoot and Athersley.

There were also reports of new pedestrian crossings not working, with a ‘green man’ that never comes.

Residents nearby said it would have been better left as a roundabout.

Pat Green, 64, of Lang Avenue, Lundwood, said she now struggles to pull out of her road onto Rotherham Road because of constant queues.

“I’ve lived here 43 years and I’ve been driving for 30 years and never had a problem here before,” she said.

“Now we’ve got all this, it’s chaos. We’ve got cars honking their horns constantly, people don’t know what they’re doing, and there’s queues in all directions. There was an accident on Saturday night.

“We had a feeling this would happen when it was announced. I’ve already spoken to someone from highways and asked if we can have a box square to stop people blocking off Lang Avenue, but they said they wanted to monitor it for a few months, see how it goes.”

Pat said one of the major problems was the lack of green filter arrows for cars turning right from Rotherham Road and Pontefract Road. Cars turning right have to pull forward onto the junction - where they can no longer see the traffic lights - and wait for a gap in the oncoming traffic.

“If there’s a wagon waiting to turn right, people can’t get past to head into town. They’re driving up onto the kerb to try and get past. It’s horrendous.”

Michael Lunn, 27 of Cherry’s Road, Lundwood, said: “It’s every man for himself on this junction now,” he said. “It’s loads worse than it was before they started.”

But Melanie Cocks, owner of Hot n Tasty Cafe, said people needed to give the new junction a chance and hoped traffic would flow better once teething problems had been ironed out.

“There were problems with the lights when they were getting them set up and established,” she said. “It’s teething problems. This week, I think it’s flowing better past us.

“We’ve lost a lot of passing trade while they’ve been doing the work. I’m hoping once the teething problems are all sorted it will start to come back.”

Council spokesman Coun Roy Miller said: “We know that the new traffic lights at Cundy Cross have been causing delays to journeys. We’re really sorry that we didn’t get it right first time.

“It will take some time, but road users will get used to the new junction. Historically as we have invested in our network to provide greater capacity, junction improvements have taken a little time to settle in. We anticipate that this road improvement will be the same.

“We’re working on getting things running smoothly as soon as possible, we have been working with engineers on the lights sequencing over the last weekend and we have them on site today (Wednesday) re-sequencing the traffic light timings. Thank you for bearing with us, we know this is really frustrating and we’re sorry for the inconvenience caused.

“The cost of the improvement works at Cundy Cross is £1.568m and this has been funded by a combination of Section 106 monies, Integrated Transport Block Grant from the Department for Transport via Sheffield City Region, Council capital resources for highway maintenance and a capital receipt.”