Market kitchen is now set up in new look market 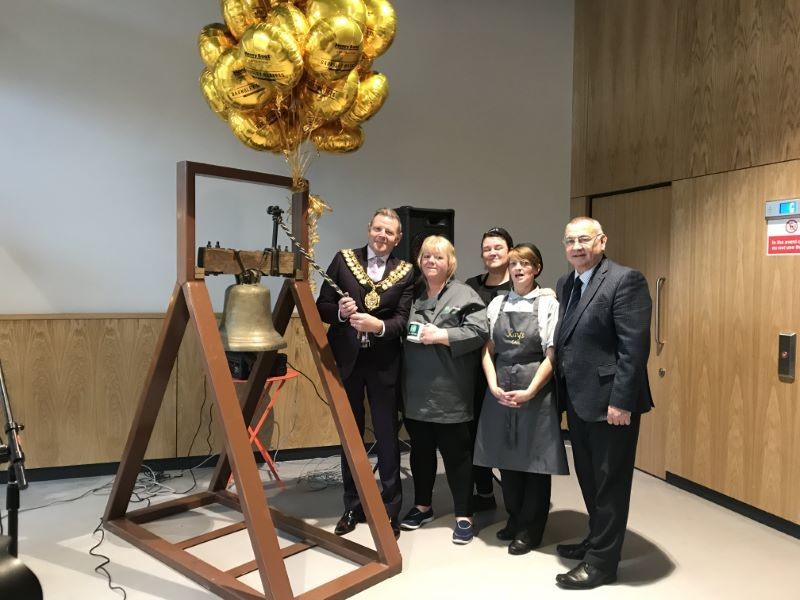 THE market cafes have moved into their new Market Kitchen home, three weeks after the opening of the rest of the market hall at the Glass Works.

The Market Kitchen was opened by leader of the Council Sir Steve Houghton and the Mayor Coun Steve Green on Wednesday, assisted by new Barnsley Market mascot Veggie and a look-alike of celebrity chef Gordon Ramsey.

Sir Steve said the opening of the Market Kitchen was yet another step forward for the markets. “Over the next few months we will see a lot of the work completed. It’s great to see how full and popular the markets are.”

Complications with the design led to the delay in the Market Kitchen opening, meaning Paul’s Cafe, Hilton’s Cafe and Kay’s Cafe could not move in straight away.

Hilton’s Cafe however has been trading in the new market, but on the ground floor in a temporary location.

Sharon Mills, owner of Hilton’s Cafe, said: “There are still a few teething issues but it’s all right. We’ve been running now for forty-odd years and we’re still going strong. We’ve always been here and we intend to keep it that way.”

Her father, Keith Hilton, who opened the business with his wife Jackie in 1974 was also present for the opening and said: “The new markets will be good for the town. It’s wonderful to see that the cafe is still going after all these years. Me and my wife started off the business in a caravan and now with my daughter running it it’s one of the largest cafe’s in the market.

“The move is positive and I’m looking forward to watching the market grow.”

The regeneration is also set to include new retail, restaurants, cinema, bowling alley, library, and a new landmark public square.

Coun Green said seeing the scheme come together in his year as mayor was ‘brilliant’.

“To see how many people are here today speaks volumes,” he said. “We’ve had three bus loads of people come to visit the markets today. This is just the start.”